Why aren’t we celebrating the 400th anniversary of the Plymouth colony? 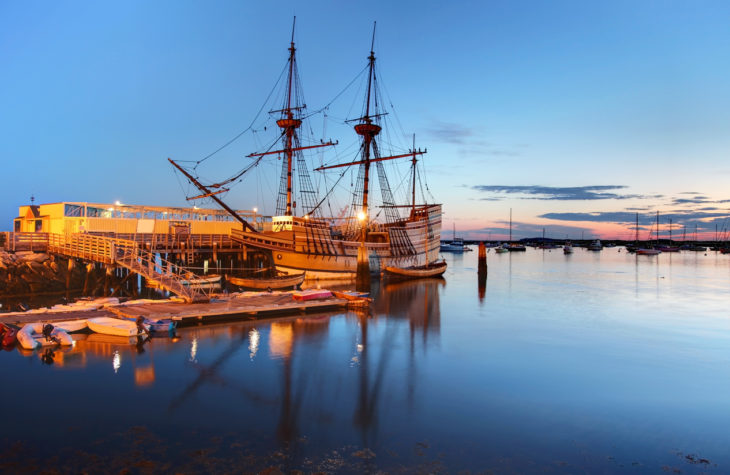 A replica of the Mayflower in Plymouth, Massachusetts (iStock)

Why aren’t we celebrating the 400th anniversary of the Plymouth colony?

On Saturday November 11, 1620, an ill-fitted cargo ship anchored off the coast of Cape Cod. On board were 102 quarrelsome and hungry passengers. Some 37 were religious dissidents, some servants, and a good many were would-be settlers contracted by the London Merchant Adventurers. Those ‘adventurers’, whom the Protestant dissenters called ‘strangers’ were none too happy about the voyage. They were supposed to be in ‘northern Virginia’, which may have meant Manhattan. But bad weather had driven their ship, the Mayflower, to an unsettled and uncertain place. They considered their contract with the London Merchant Adventurers null and void and were prepared, on landing, to strike out for themselves.

Cooler heads prevailed. Later that day, perhaps with the help of some strong-arm tactics, the leaders of the Leiden, Holland Congregation — the people we call Pilgrims — gained the signatures of most of the men on an agreement to stick together and govern themselves as a ‘civil body politic’. That modest document was the Mayflower Compact, and it carries outsized historical weight. It was the beginning of true self-government in the English colonization of North America. And it gave voice, or at least it whispered, some new ideas. The signatories agreed to elect their government, frame their own laws, respect their differences and discard many of the Old World ideas of hierarchy. The new settlement breathed the fresh air of equality. Masters and servants both signed the compact.

You would think this event would be anchored in American history with the solidity of, say, Plymouth Rock. And you would, in a curious way, be right. In the era of de-plinthed statues of American founders and heroes, Plymouth Rock itself was defaced earlier this year. It was spray-painted with various squiggles and the motto ‘508, MOF’, the meaning of which remains unknown, except that 508 is Plymouth’s area code. We can take it, if nothing else, as a gesture of symbolic destruction. Four hundred years later, the strangers have wreaked their revenge for having been drafted into the Mayflower Compact. Or perhaps it was one of those contingents of Native Americans tagging a boulder that Massasoit too easily ceded to the invaders.

In Plymouth today the descendants of the Pilgrims and the Patuxet Indians get along pretty well as merchandizers of local history, but the grand fete planned for the 400th anniversary went bust. Perhaps it was mostly killed by the COVID shutdown. An epidemic itself of course might be taken as a fitting memorial for the 400th anniversary. After all, the Pilgrims arrived after what’s called ‘the Great Dying’ in which a plague swept coastal New England, wiping out whole tribes including the Patuxet. And then Plymouth itself lost 45 of its number in that first awful winter.

But COVID wasn’t the only wet blanket on Plymouth’s plan for a grand quadricentennial. The deeper problem might be called the Zinnification of American history. You can only teach children that America was founded on genocide, slavery, expropriation, heedless destruction and oppression for so long before people begin to believe it. Plymouth had the added misfortune of scheduling its history at a resurgent peak of the Culture War. Respect for the past became a talking point for the Trumpian right, and the Sandersesque, AOC-activated left took its lead from the scorched-history approach of Nikole Hannah-Jones and her compeers at the New York Times in their anti-history fable, the ‘1619 Project’. What hope had the sweet Priscilla Alden up against the flaming vitriol of Nikole Hannah-Jones? Why none. None at all.

Plymouth has other problems besides a lack of tourists. Declan Leary writing in the American Conservative details the invasion of the town by gentrifying yuppies who have driven real estate prices through the thatched roof and displaced the hapless locals, not unlike what the Puritans did to the Pilgrims back in the day. But the real story is that the vision of earnest self-government the Pilgrim Fathers, against all odds, made stick in the hostile environs of coastal Massachusetts has become unstuck. We are a nation that is not just neglectful of our real history but at war with it. Ask 508 MOF. He will tell you how phony the whole thing is.

Peter Wood is the president of the National Association of Scholars. His latest book, 1620: A Critical Response to the 1619 Project, is published by Encounter Books.