Why is no one treating Bernie Sanders like the Democratic front-runner?

From a purely electoral standpoint, Sanders stands the best chance against Trump 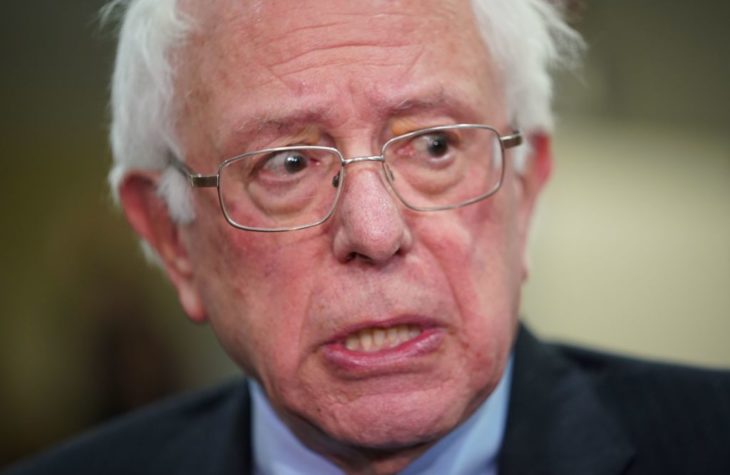 US Senator Bernie Sanders(I-VT) speaks before US Secretary of State Mike Pompeo speaks to reporters at the US Capitol after briefing senators in Washington, DC on November 28, 2018. (Photo by Mandel NGAN / AFP) (Photo credit should read MANDEL NGAN/AFP/Getty Images)

Why is no one treating Bernie Sanders like the Democratic front-runner?

By most conventional pundit metrics, Bernie Sanders should be the presumptive 2020 Democratic presidential nominee. To state the obvious, he was last cycle’s runner-up, having won 46 percent of elected delegates, 23 states, and smashed small-dollar fundraising records. His policy platform has taken hold across the party, with most every nationally ambitious figure now calling for universal Medicare, free public college tuition, and a host of other measures that were closely associated with his 2016 run. He has consistently polled as the most popular politician in America, he just won re-election in his home-state by a massive margin, and his social media engagement is off-the-charts. So what’s the problem?

Simply put, large sections of the party still view him as a threat. As much as they’ve attempted to court him, flatter him, and accommodate him in various respects – recall the awkward ‘unity tour’ he held with DNC chairman Tom Perez in 2017 – he is still fundamentally at odds with the interests of the party’s most powerful actors. They might adopt bits and pieces of his agenda, as everyone from New York governor Andrew Cuomo to Nevada senator-elect Jacky Rosen has to varying degrees. And they might offer him polite compliments on the campaign trail, knowing he has an enthused core of supporters. But they will not formally back him in a primary, under virtually any conceivable circumstances. And that’s because for all the kind words Democratic officials have sent his way in the past two years, they are largely just that: words. These entreaties should be seen as attempts at appeasement more than any wholesale endorsement of his basic political program.

Sanders’s economic vision, elementally, is not compatible with the Cuomos and Rosens of the party. He is a socialist, and they are avowedly not. All other considerations around his candidacy can be distilled into that basic, unalterable fact. And this fact is what animates the emerging punditocracy perception of his 2020 prospects. You could almost imagine an alternate universe in which there were demands for the ‘field to be cleared’ for Sanders by virtue of the stature he acquired from the previous cycle. But that’s not happening, and won’t happen, because the ideological chasm he harnessed in 2016 is still there. And it will only continue to widen.

Assumptions about presidential ‘front-runners’ in the political press often derive from the attitudes of party donors, who share their candidate-fancying whims with reporters. This then congeals into a narrative about ‘who’s up and who’s down.’ But Sanders will never be ‘up’ by such a metric, because not only does he have zero interest in supplicating to the party’s donor base – he is actively hostile to them. They were not who he relied on for financial support in 2016, because he pioneered ground-breaking grassroots fundraising tactics which vaulted him to contender status. Central to his overall political vision is doing everything possible to circumvent wealthy donors and diminish their influence.

And these donors are who will continue to shape perceptions of the emerging field among the press. For instance, the FiveThirtyEight politics podcast crew, asked in mid-November to proffer their odds for various Democratic candidates, did not mention Sanders until the third round of their friendly presidential ‘draft’ – almost as if he were a mildly bothersome afterthought. This might be a slightly trivial indicator, but it’s still a reflection of how pundit consensus is overlooking Sanders for a host of reasons – none of which have much to do with empirical reality. In the unreliable yet still extant early polling of the 2020 cycle, Sanders is bouncing around the top, usually just below Joe Biden. But one of the FiveThirtyEight prognosticators picked New York senator Kirsten Gillibrand ahead of him: someone who has done virtually nothing to suggest she has anything close to a formidable national constituency. Sanders, on the other hand, doesn’t have to prove anything in this area: he’s already done it. And yet a slew of new pundit criteria are being formulated to preemptively exclude Sanders, because again, by most conventional metrics he should be deemed the ‘front-runner’ (an admittedly nebulous term). So journalists of various stripes, who have long been instinctively dismissive of him, see no option but to invent brand new metrics.

Dave Wasserman, a Cook Political Report elections data analyst (and typically a very good one), promulgated his conclusion that the ideal opponent for Trump in 2020 must be a young and charismatic female with ‘a natsec background’ and no long history in elected office. Notice that none of these criteria have much to do with policy; it’s on identity grounds that Sanders will probably be most vehemently attacked. He’s too old, white, crotchety, or whatever. But as loud as these criticisms will be, they’ll be underlain by one which is more salient for the power base of the party: the ideological fissure he inescapably represents. People who are most threatened by that might opt for the more superficial arguments against him, because they know Sanders’s socialist vision is increasingly popular with the electorate. But the most central reason for their hostility will always be ideological.

There is another important factor militating against Sanders, at least in the eyes of the opinion-making class. In the 2016 primaries Sanders consistently over-performed with rural white voters, notably in Wisconsin and Michigan, states now crucial to any Democratic victory in 2020. On paper you’d think this would be a huge point in Sanders’s favor, as Democratic losses among that demographic have hobbled their electoral fortunes time after time. But when filtered through the myopic lens of the punditocracy, what might otherwise be regarded as a valuable asset will instead be cast in dark, nefarious terms: as if Sanders’s appeal among these voters makes him vaguely suspicious and perhaps even racist (yes, this will be alleged.)

The 2018 midterms demonstrated that the Democratic party is increasingly anchoring its political support in areas of the country that are highly wealthy, a trend ably described by Matt Karp in Jacobin magazine. He cites Virginia’s 10th congressional district, the richest in the country by median household income, as a case study. This district was one of the night’s most rousing victories for Democrats, with incumbent GOP representative Barbara Comstock dumped decisively for generic Democrat Jennifer Wexton. One could infer, plausibly, that Democrats’ Trump-era messaging has resonated strongest in the country’s most affluent regions – probably due to a combination of cultural aversion to the modern GOP and marginal gripes with the 2017 tax cut bill, which crushed well-off conservative areas in Democratic-leaning states. Now more than at any point in its centuries-old history, Karp declares, Democrats are the ‘party of the prosperous.’

Per the terms of conventional pundit thinking, this bodes ill for Sanders. Sanders has a clear constituency, and it’s emphatically not ‘the prosperous.’ In the 2016 cycle, he frequently trounced Clinton in poor, rural areas, as his landslide victory in the West Virginia primary highlighted. Nationally, the counties in which Sanders performed the best tended to be its most rural and poorest, by median household income. Take California, where he won the five poorest counties by double digits. Conversely, he was battered in the wealthiest counties, where the nucleus of the state’s political power resides – losing rich liberal enclaves like San Francisco, Marin, and San Mateo by huge margins to Clinton.

The rural areas integral to Sanders’s 2016 success are increasingly being written off by Democratic pundits and operatives as unnecessary to forge any winning national electoral coalition. Paul Krugman recently dismissed them as almost intrinsically incorrigible, echoing Clinton’s ‘deplorables’ remark in slightly more charitable terms. And there is some logic to this, however misplaced: Democrats’ biggest gains in the House were disproportionately the very kinds of districts at which Clinton aimed her focus in the 2016 general election – affluent suburbs with tiny shares of persuadable Republicans – to predictably disastrous effect. But now that this narrow approach has yielded geographically-isolated victories in the House, Democrats may reason that Clinton’s strategy wasn’t so bad after all. Consequently, Sanders’s strength among dispossessed rural voters will be argued away, somehow, as a weakness.

With the (hellishly long) 2020 cycle having semi-officially begun, the move will be to pressure Sanders to put aside his ego and bow out for various unpersuasive reasons. Among other tactics, this will take the form of anonymous operatives counseling that he expend his considerable energies on something other than a presidential campaign – the same kind of condescending head-patting that was common in the liberal commentariat during the 2016 run. The logic then was that Sanders should be politely complimented for ‘changing the debate’ in numerous vague respects, but actually supporting his electoral victory was a non-starter. One of the ‘hacked’ emails released by WikiLeaks in 2016 showed Democratic National Committee officials discussing ways to ‘throw [Sanders] a bone’ with meaningless concessions to gain his support, and that attitude will persist as they figure out ways to not-so-gently nudge him from 2020 consideration.

This is all the more ironic, because from a purely electoral standpoint, Sanders stands the best chance against Trump. For one, he is largely unsusceptible to charges of personal hypocrisy – at least by national politicians’ standards – having said much the same thing in public life for several decades. He is not marred by questions around personal corruption, although the FBI investigation into his wife’s land deal in Burlington would have to be affirmatively dealt with at some point. If that’s his one major liability, though, then his liabilities are few – especially compared to the previous Democratic nominee and Trump, whose various personal corruptions could be barely captured by several days’ worth of exhaustive documentation. The age issue will be exhaustively whinged about, but he’s only four years older than the incumbent president, and by all appearances in much better physical shape.

But as much as Democratic power brokers loathe Trump, they can’t countenance Sanders. And their mindset will inform pundit consensus as the hellishly long presidential cycle barrels forward. In Sanders’s calculation, maybe this is for the better. An unambiguous ‘front-runner’ designation would be a mixed blessing, because one of Sanders’s strengths last cycle was how his appeal grew somewhat under the radar, until the evidence for it became impossible to ignore. So it could easily creep up on them again, only this time louder and more determined, backed up by a national infrastructure that didn’t exist in 2016. He also has what amounts to his own sub-rosa alternative media eco-system, which has only grown in the past few years, and some Sanders supporters do now occupy prominent positions in elite journalism, whereas last time there were almost none. So the campaign to disqualify him won’t be easy, but it will be waged vigorously. And that might be exactly what Sanders should want.