Beware the Ides of Trump 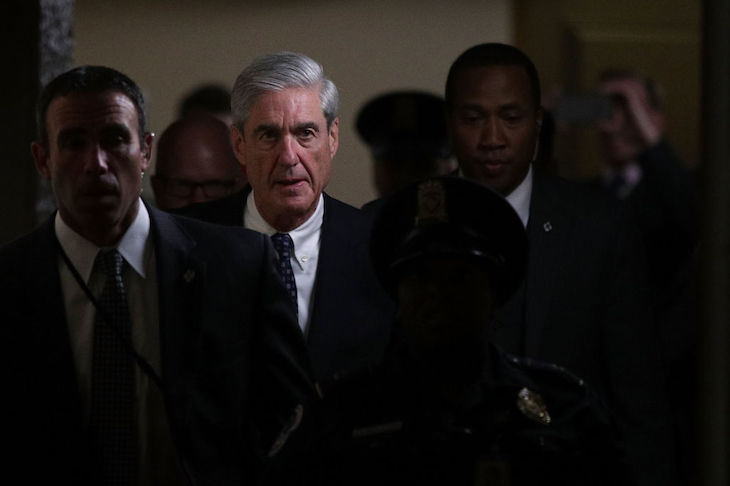 Beware the Ides of Trump

Update 3/8 1p.m. ET: Latest word from inside the DoJ is to ‘expect nothing’ today or over the weekend about the Mueller report. That might mean that Mueller has not handed in his report as predicted here. Or it might mean that Bill Barr wants to settle down with a nice cup of cocoa and burrow into the report over the weekend. Either way, the president, his children, and everyone else will have to wait a bit longer to find out what the Special Counsel will say.

One former official, passing along information from a ‘100% reliable’ source inside the Department of Justice, tells Cockburn that Robert Mueller will give his report to the Attorney General on Friday. It will make the case for ‘collusion,’ he said, and will not just be about ‘process’ – perjury, obstruction of justice – or financial crimes.

The same former official was also convinced that there would be indictments for one or more of President Trump’s children. Cockburn spoke to two others  – each (apparently) with their own sources on the matter – who said this Friday would be a big day in the Trump-Russia investigation.

The former director of the CIA, John Brennan, has clearly heard the same. He said as much when he appeared on Lawrence O’Donnell’s show on MSNBC, The Last Word. ‘I think Robert Mueller wants to be able to conclude his work and turn over the investigative threads to the Southern District of New York, the Eastern District of Virginia and other jurisdictions as appropriate. I wouldn’t be surprised if, for example, this week on Friday – not knowing anything about it – but Friday is the day the grand jury indictments come down.’

The Ides of March is the day in the Roman calendar that corresponds to March the 15th, a week tomorrow. Julius Caesar was assassinated on this day in 44 BC.  Shakespeare’s soothsayer warns Caesar: ‘Beware the Ides of March!’

On MSNBC, Brennan appeared to choose his words deliberately: ‘If anybody from the Trump family, extended family, is going to be indicted, it would be the final act of Mueller’s investigation.’ He said: ‘Bob Mueller and his team knows if he were to do something – indicting a Trump family member or if he were to go forward with indictment on criminal conspiracy involving US persons – that would basically be the death of the special counsel’s office, because I don’t believe Donald Trump would allow Bob Mueller to continue in the aftermath of those types of actions.’

Lawrence O’Donnell told his viewers they really had to ‘listen to every word’ of Brennan’s carefully. Those words, it seems to Cockburn, do more than hint at indictments for Trump’s eldest son, Don Junior – ‘family – or his son-in-law, Jared Kushner – ‘extended family’. Brennan said Mueller would use his report to address whether there had been a ‘criminal conspiracy,’ that is a conspiracy – or collusion – involving Russia, the allegation he was asked to investigate.

This does not mean that Mueller would, or could, indict Donald Trump himself. Department of Justice policy is that a sitting president cannot be indicted by the criminal justice system. That would be left to the House of Representatives, which can impeach – or charge – a president, by simple majority vote. A trial in the Senate would follow, with two-thirds needed to convict. House Democrats are trying not to seem too eager to impeach Trump but Cockburn would bet a porn-star sized payoff that impeachment proceedings are inevitable.

An official in the Obama administration said that if Trump’s children or his son-in-law were indicted, a deal would be offered: leave now, quietly, and everyone gets pardoned. Did anyone ask Mike Pence about this? One Washington insider said he’d heard whispers of conversations ‘across the aisle’ on how to bring the country together if Trump was run out of office. On the other hand, a witness for the Mueller inquiry, who’s given evidence about Russia, tells Cockburn that the report will say, as Trump does: ‘No collusion!’

You can view all this as the inside track. Or as the kind of feverish speculation that’s followed Mueller and Trump since the Russia inquiry began. Witch-hunt! March 15 – the Ides of March – falls a week after Mueller may (or may not) report. This was the day – in 1917 – that Czar Nicholas abdicated in the Russian revolution. It was the day – in 1971 – that The Ed Sullivan Show was canceled after 23 years on CBS. It seems that The Trump Show is about to get the review that could decide whether it stays on air. ‘Beware the week before the Ides of March!’

Update 3/8 1p.m. ET: Latest word from inside the DoJ is to ‘expect nothing’ today or over the weekend about the Mueller report. That might mean that Mueller has not handed in his report as predicted here. Or it might mean that Bill Barr wants to settle down with a nice cup of coco and burrow into the report over the weekend. Either way, the president, his children, and everyone else will have to wait a bit longer to find out what the Special Counsel will say.