Boris has more in common with Corbyn than he thinks

Both stand on an anti-politics, anti-establishment platform 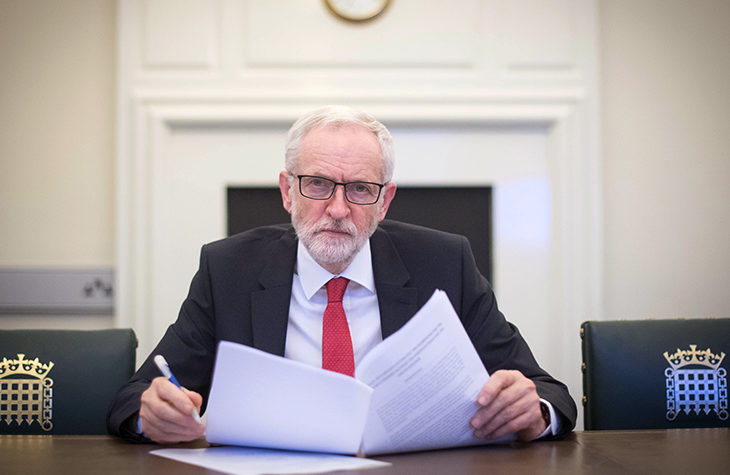 LONDON, ENGLAND – APRIL 2: Labour leader Jeremy Corbyn poses with the Political Declaration setting out the framework for the future UK-EU relationship, in his office in the Houses of Parliament on April 2, 2019 in London, England. The Labour Leader has agreed to meet the Prime Minister for cross-party talks after her address to the nation stating she will ask the EU for an extension to the negotiating period of Article 50. (Photo by Stefan Rousseau – WPA Pool/Getty Images)

Boris has more in common with Corbyn than he thinks

Boris Johnson’s opponents love to accuse him of using the ‘Trump playbook’. Some on the left have become so obsessed with this comparison that they’ve even demanded that the prime minister be impeached. But over the past few weeks, Johnson’s behavior has borne a far closer resemblance to a man he claims to look down on: Jeremy Corbyn.

Both men stand on an anti-politics, anti-establishment platform. When Corbyn became leader he promised a ‘kinder, gentler politics’, and eschewed many of the traditions of the Commons. His advisers still believe that he is going to be the man-of-the-people candidate in the looming election, arguing that attacks from the media only bolster his anti-establishment credentials.

Conversely, Johnson is planning a people vs parliament-themed election, standing up for those who want Brexit against a chaotic and self-indulgent House of Commons. His advisers believe that many of the debates over the rule of law and expelling Members of Parliament from the Tory benches have gone over the heads of voters, who just want the government to get on and get Brexit over with.

No one is more vocal about this than Johnson’s top adviser, Dominic Cummings, who this week told reporters that they should ‘get out of London. Go and talk to people who are not rich Remainers’. Westminster has become as fixated on Cummings as it has been on Corbyn’s powerful and rather terrifying aide Seumas Milne.

Milne can only dream of achieving what Cummings has managed in just a couple of months. The Tories have long made a fuss about the way the Labour party appears to be forcing out moderate MPs. But only a handful of backbenchers have trickled out of the Labour party in the past year. Johnson explosively expelled 21 MPs all at once. Other MPs have announced they won’t stand again at the next election, acknowledging privately that they no longer have a future in the Conservative party.

At least the Tories hold the moral high ground when it comes to tackling racism, right? Wrong. Once again, Johnson has copied Corbyn almost verbatim. During the leadership contest, he was forced by rival Sajid Javid to pledge an inquiry into allegations of Islamophobia in the Tory party. We recently learned that this was being watered down to an inquiry into ‘all racism’, which is exactly the term Corbyn uses when he tries to dodge questions about whether Labour is taking instances of Jew-hatred seriously enough.

This week former Labour MP Ian Austin was heckled by Corbyn’s comrades when he attacked the leadership over anti-Semitism. Many of the Labour MPs listening have also been upset by the anti-Semitism in their party, but have concluded that it is better to ‘stay and fight’ than to leave altogether. That ‘stay and fight’ line, often used by deputy leader and Corbyn opponent Tom Watson, tripped out of the mouth of the tribal Tory Matt Hancock after Amber Rudd resigned: he said he hoped ‘other One Nation Tories will stay and fight for the values we share’.

Those One Nation Tories should watch what is happening to their Labour colleagues if they want a preview of how ‘stay and fight’ pans out. Labour MPs are currently facing ‘trigger ballots’, a mechanism that stops an MP from being automatically reselected by his or her local party for the next election. The Corbynite grassroots group Momentum is using it to drive out insufficiently pure MPs. Awkwardly, the first MP to face such a process is not a Blairite Corbyn opponent but Diana Johnson, a middle-of-the-road left-winger who tends to keep her head down during internal rows. Many Labourites had hoped if they just stayed quiet, they’d be safe, but Diana Johnson’s case suggests otherwise. Others, like Jess Phillips, have threatened to leave if Corbyn doesn’t address anti-Semitism properly, only to stay anyway, hoping they might in future be able to take over as leader.

Perhaps both Labour and the Tories will end up with new leaders. But for the time being, both are engaged in the same battle for purity. The main difference is that, as always, the Tories are being far more ruthless.