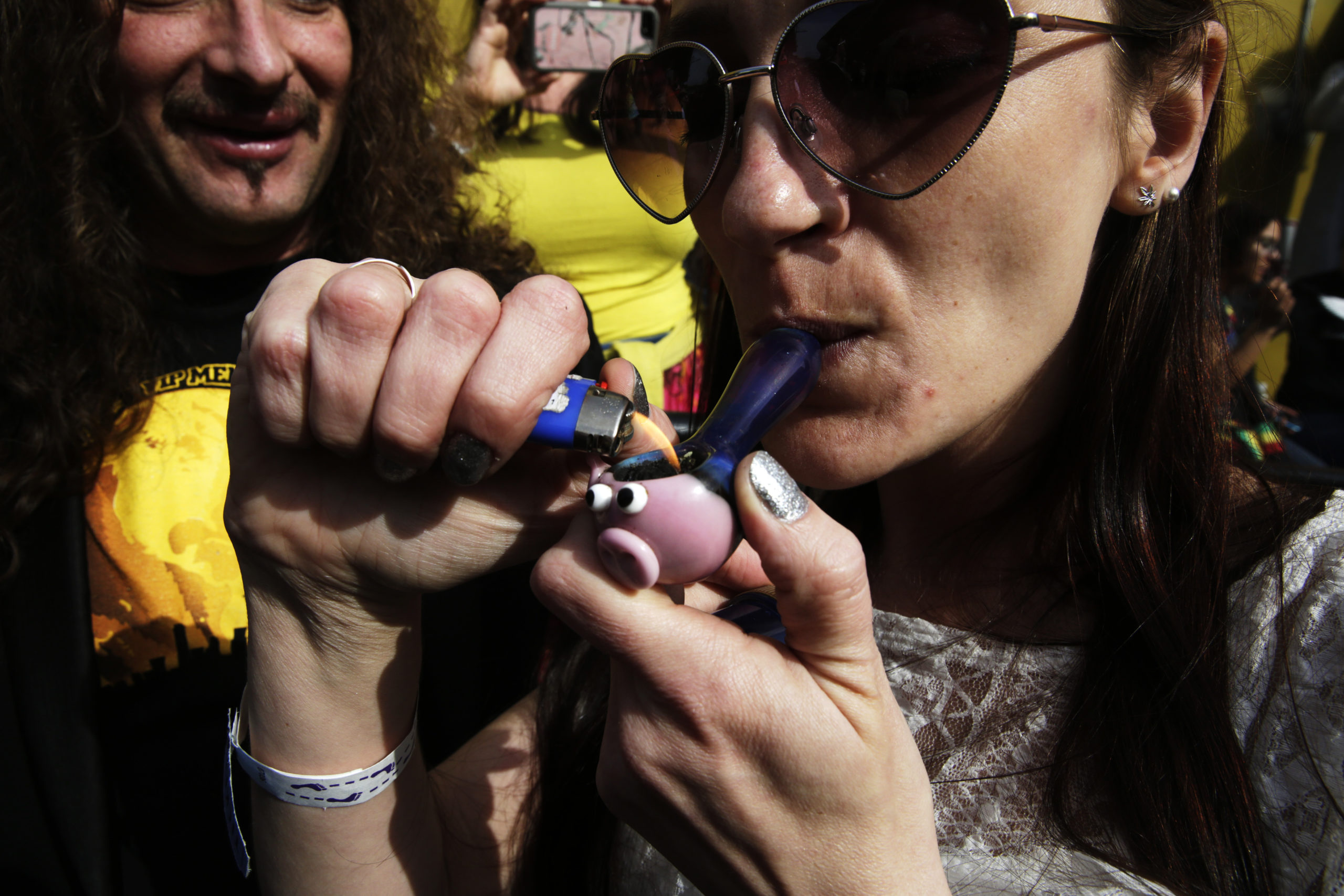 SEATTLE, WA – APRIL 20: Ryme Windham smokes marijuana at 4:20 pm outside at Hempfest on April 20, 2014 in Seattle, Washington. Seattle Hempfest is an annual event for the purpose of educating the public about the benefits of marijuana and advocating for its decriminalization. (Photo by Meg Roussos/Getty Images)

Which is where I write this. Five years ago, our state took the bold decision to legalise pot, and a thick haze of the stuff lingers long in the air in these balmy Northwest nights. It’s become one of the distinctive characteristics of our street, and of our environmentally obsessed city, always proverbial for its snow-capped mountains and sparkling lakes, and now also proverbial for its pungent residential neighbourhoods. Musky clouds of skunk roll over the homes of rich and poor alike, and just sitting in your back yard for a few minutes is enough to make you feel you’re back in one of those 1970s undergraduate parties where people with skinny cigarettes in their mouths lolled around the floor listening to Captain Beefheart records.

Here in Seattle, we’ve become a land all but free of politicians or anyone else who might dare to challenge the stoner consensus. Our newspapers seem as disgusted by the idea of ‘anti-pot’ readers as they are by ‘pro-life’ ones, and do all they can to shake them off. They run endless stories and editorials about such people being ‘traditionalists’ who want – as if there could be anything worse – to ‘turn the clock back’. For me, late middle-age in the Emerald City increasingly consists of the odd feeling of being the only sober person in a room full of drunks.

Take our current county executive, ‘Smack Daddy’ Dow Constantine, or our city mayor, proud-to-be-gay Jenny Durkan, Democrats both. Durkan got the job in 2017 after her Democratic predecessor Ed Murray resigned amid child sex-abuse allegations that local taxpayers have so far stumped up $150,000 to settle on his behalf. Both Constantine and Durkan are seemingly obsessed with creating government-funded heroin dens by performing eminent-domain on our city parks. These are places where you used to see children happily playing on swings, but which our city elders now use as a laboratory for testing the guardrails defining the limits of acceptable behavior, specifically by allowing junkies to shoot up under the supervision of ‘state compensated’ medical professionals.

When you go into the men’s room of the Seattle public library, as I sometimes do, the first thing you see on the wall is a sign informing you that this is a ‘Safe Space’, free from hate, racism, and judgement, and where there’s no such thing as an ‘illegal’ citizen. The next thing you see is a large glass-fronted box where heroin addicts are invited to drop their used needles.

You may have heard of some of Seattle’s schemes for funding the sprawling canvas cities erected to provide a ‘secure and hygienic environment for sufferers of the disease of addiction’ as Durkan describes the somber ghettoes where we house those who have developed the art of having more fun than their minds or bodies can handle. If you drive up one of the hills surrounding the downtown core, you’ll get some idea of the scale of the enterprise. There’s a touch of Dunkirk about the scene as you gaze over the ranks of the wasted, huddled around the waterfront area, with their tents and field latrines and campfires, and, moving among them, the bright-red ‘Medic’ T-shirts that dart to and fro in the murk.

One fundraising idea was the ‘head tax’ aimed at soaking Seattle businesses for $275 per full-time worker each year; a bargain, as the initial proposal was for $500 per worker per year. After local employers such as Amazon and Starbucks objected, City Hall reversed itself and repealed the tax by a vote of 7-2, just 29 days after imposing it. Councilwoman Kshama Sawant, who was one of the two holdouts, said the city was ‘bending to big business’, and referred to Amazon CEO Jeff Bezos (who provides about 40,000 local jobs) as an ‘enemy’ of Seattle.

More recently, City Hall has announced a pilot program requiring 2,000 volunteers to drive around town with an automated meter clamped to their cars. The drivers will then be charged for each mile they travel on the public roads. Reema Griffith, our transportation czar, has acknowledged that the idea of government monitoring your driving habits is ‘troubling to a lot of people’. But that doesn’t stop her. With every passing day, our representatives find new ways of separating Seattle’s workforce from its money and redistributing it to those who have succumbed to their craving for feelgood brain chemicals.

‘Ours is a community of incredible sights, scents, sounds, and sensations,’ the Seattle Tourist Board writes in the first line of its official welcome pack for visitors. That’s true, but these days it’s increasingly likely to be the scenes of stupefaction, the aroma of stale pot, and the uneasy feeling of having stepped into the shoes of one of Samuel Beckett’s existential clowns, and shambling through a barren, bombed-out landscape.