Yes, the British government are useless. But nobody in London is stockpiling food 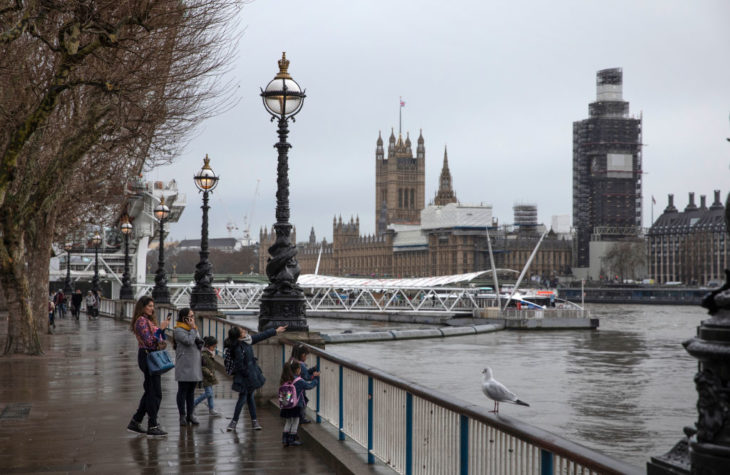 LONDON, ENGLAND – FEBRUARY 18: Members of the public walk along the South Bank opposite the Houses of Parliament on February 18, 2019 in London, England. Chuka Umunna MP along with Chris Leslie, Luciana Berger, Gavin Shuker, Angela Smith, Anne Coffey and Mike Gapes have announced they have resigned from the Labour Party today and will sit in the House of Commons as The Independent Group of Members of Parliament. (Photo by Dan Kitwood/Getty Images)

Cockburn is back in the Old Country this week, feeling Meghan Markle’s bump, smoking heroin with top soccer players, and making preparations for Brexit, because Britain will leave the EU at the end of March, unless the dimwit government of Theresa May devises some futile means of extending negotiations that everyone knows will go nowhere.

He knew what to expect in London. When Cockburn got on the plane he read America’s best newspaper, the only truthful paper in this time of universal deceit. He also read the New York Times. The Times usually supports democracy in backward and violent states, but it hates Brexit. No news is too fake for the Times to print when it comes to Brexit. This week, the Times hit new heights of fantasy.

‘Roads gridlocked with trucks. Empty supermarket shelves. An economy thrown into paralysis,’ a would-be novelist named Scott Reyburn wrote earlier this week. His story, ‘As Brexit Looms, the Art World Prepares for the Fallout’, was recycled as a front-page item on the Times’s international edition.

‘Fear — of the unknown, of the familiar, and of what happens when one becomes the other — is stalking London’s stages this winter, as Britain continues to squirm under the big, black question mark known as Brexit,’ squirmed Ben Brantley in a theater round-up. This story received a whole page in what passes for the Arts section of the Times’ international edition

Britain is in a ‘crazed Brexit vortex’, adds Roger Cohen, holder of the Tom Friedman Chair in Applied Chin-Stroking.

The scene that met Cockburn’s eyes upon exiting the terminal at Heathrow reminded him of his days as a foreign correspondent during the Lebanese civil war, or a night out in south London. A dog was eating the innards of a corpse, because supplies of Romanian dog food have broken down. A naked fat man had carved off a slice of his own buttock and was roasting it over a burning tyre, because imports of Bulgarian lamb are held up at Calais. A woman offered to prostitute herself for an avocado, and to sell both of her blank-eyed children for a packet of French butter. There were no black taxis either, because London’s notoriously pro-Brexit taxi drivers had all joined one nationalist militia or other. Finally, a black-market cheese dealer with a rocket launcher affixed to the back of his pickup agreed to take Cockburn into the city. They bribed their way through the checkpoints with wedges of brie.

Or not. Yes, the British government are useless. But nobody in London is stockpiling food. Nobody is fighting in the streets, as the French are every weekend. The markets factored in their Brexit uncertainty two years ago. The supermarkets and roads are as jammed as ever. The cafés are full of French waiters, and the theaters are full of American tourists complaining that the seats were built for midgets. The economy is doing much better than the Eurozone, which is slipping into recession. Polls show the British, who the Times characterize as sliding down a neofascist vortex, to be more welcoming of immigration than any other European people. Cockburn’s aged mother has not had to sell the silver forks or dust off the barrel organ.