The cars of the future

For those of us who enjoy a more leisurely driving experience, the future shines bright 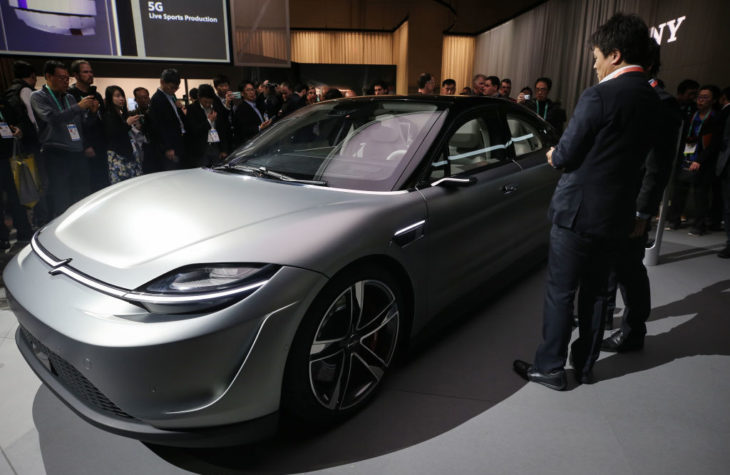 The cars of the future

A revolution is under way that will fundamentally change the way humans relate to their cars, so that the vehicle more closely resembles the living room with all the stress of driving removed and all the possibilities of distracting entertainment.Cars will soon become an extension of movie theater, concert venue and 3D videogame as the full potential of 5G communication is unleashed, along with a business imperative of advertisers wishing to monetize the opportunity of drivers being a captive audience for hours at a time.A taste of the future was glimpsed at the Consumer Electronics Show in Las Vegas earlier this month. Several concept cars were demonstrated including a Mercedes that resembled a creature from the movie Avatar, a flying car from Hyundai and an entertainment vehicle from Sony. What united all the concepts was the engagement of technology and consumer companies like Google, Amazon and Apple that are driving solutions to transform the humble car.

The changes planned are a logical extension of the evolution of the car over the past 100 years from the mechanical device controlled by the hands, feet and brain of the humble driver. That is being replaced by the possibility of autonomous vehicles, where the driver becomes a passenger who controls the car by voice and occasional touch while working, watching a movie or admiring the view. Today, around half of the 17 million cars sold annually in the US have access controlled by a fingerprint instead of a key. While convenient, it often makes it much easier for thieves to gain access as well. This will soon be replaced by voice, face or retina recognition, which will not just unlock the vehicle but will start the car and enable all the other technology that used to be available only at home. Hyundai already deploys a fingerprint recognition system in two of its vehicles in China that do away with a key fob or smartphone to turn on the engine and drive. Apple is also seeking to migrate its Face ID system used on iPhones and computers to the car.Two other biometric systems are under development and will be ready to deploy in the next two years. The first comes from the electronics firm Gentex, which uses an iris scan based in the car’s mirror. The second comes from Aerendir Mobile which is ‘the developer of a physiologic technology for authentication, identification, encryption, and bot detection. This solution extracts a unique proprioceptive signature, called NeuroPrint, from micro-vibrational patterns in the user’s hands, using the accelerometers and the gyroscopes that are standard in today’s mobile devices’. This means the technology reads the unique and tiny vibrations in a user’s muscles that originate in the brain.Biometrics will also be used to recognize the individual user of a car and adjust seats, mirror and steering to the person. At the same time, that individual will be monitored for overall health, including heart rate and blood pressure through the steering wheel. A health crisis will be automatically alerted to home and doctor and the car driven to the nearest hospital without any intervention from the driver. Driver monitoring will be a fact of driving life in the very near future and every major car manufacturer is investing in the technology. One solution, created by startup Affectiva can monitor emotion and automatically assigns a risk factor to such areas as distraction, head pitch, eye movement and anger.Today, on some high end vehicles, Heads Up Display on the windshield presents speed, temperature and what music or radio station is playing. This limited technology is extraordinarily crude — a little like the giant cellphones of 20 years ago when compared with today’s iPhone. A number of companies are developing a much more comprehensive system that will display in full color and 3D the surrounding view of the journey as it unfolds, any hazards ahead and all the other data that would otherwise be available to the driver by taking his or her eyes off the road. By the end of this year, 70 percent of new cars in the US are expected to be equipped with some form of Augmented Reality.Inevitably, the technology will be accompanied by business opportunities that companies might see as a way of subsidizing the technology to make it ubiquitous. For example, Starbucks or KFC may buy display ads for the HUD that would alert drivers and their passengers (through the HUD in the rear seat displays) to a forthcoming seasonal special. Or, if the driver regularly shops at Orvis for fishing gear he might get a differently tailored ad.Those of us confronted by the traffic snarls in every major city from Austin to Seattle, there is finally the prospect of an altogether different experience enabled by 5G. This will provide instantaneous connectivity between vehicles and a central network so that traffic can flow like a river instead of a series of rapids mixed with rocky shoals and apparently impassable sandbanks. Instead of the driver doing their best to weave in and out of traffic, or manage the frustration of being stuck behind the slow driving idiot in the fast lane, the technology will act as the omnipotent controller, seamlessly shifting vehicles to the correct lane, dictating speed and deciding the progress automatically for both on and off ramps. That in turn provides the opportunity for almost complete disengagement from the process of driving. That provides an opportunity to create an in-car experience that more closely mirrors the seamless integration of devices from desk computer to tablet and phone. The car will become an extension of those devices for shopping, watching movies and keeping in touch via text, call and tweet. The difference between home and car will be that everything will be voice activated with any payments being automatically synced via the biometric recognition system.Assuming journey’s end is somewhere downtown, there are more than 40 startups working to create better traffic management systems that will cut down the average 17 hours a year and $365 drivers spend looking for parking. If every car parking space and meter is seamlessly linked to a data management system that in turn connects to every vehicle, seamlessly directing a car to the optimal vacant parking spot will be a snap.Aside from the user experience, this move towards a new generation of technology-enabled cars will transform the risks and rewards of driving. Autonomous vehicles will reduce the cost of fuel consumption by around 40 percent, public safety spending will fall by $230 billion and the number of traffic related deaths will also fall by 90 percent. In theory, that should mean that car insurance costs will also fall, but somehow that seems unlikely to happen.For those of us who enjoy a more leisurely driving experience, the future shines bright. But for the next generation of drivers, that rubber-burning, exhaust rattling, head banging excitement of growing up may be a thing of the past, only visible in old movies and TV shows.