The COVID trap: will society ever open up again?

A ‘temporary’ expansion of government power is hard to reverse 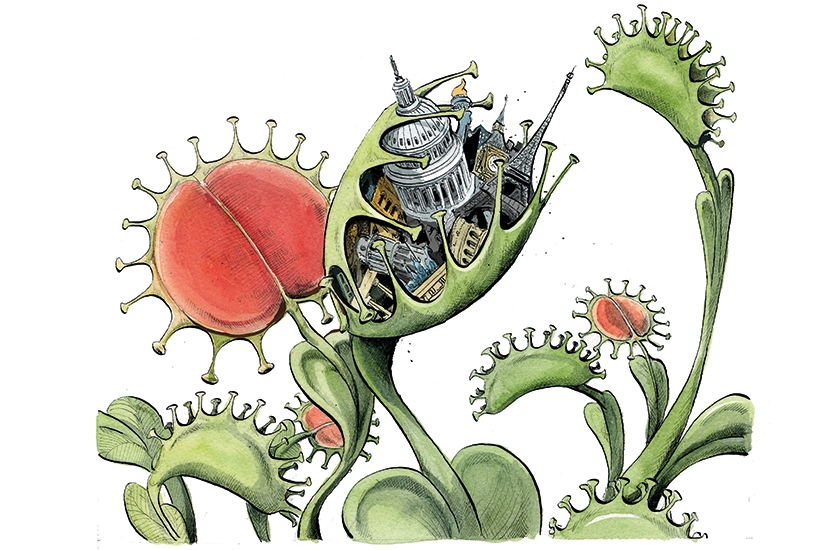 The COVID trap: will society ever open up again?

The great pandemic of 2020 has led to an extraordinary expansion of government power. Countries rushed to close their borders and half of the world’s population were forced into some sort of curfew. Millions of companies were prohibited from carrying on business. In supposedly free and liberal societies, peaceful strollers and joggers were tracked by drones and stopped by policemen asking for their papers. It’s all in the name of defeating coronavirus; all temporary, we’re told. But it’s time to ask, just how temporary? As Milton Friedman used to warn: ‘Nothing is so permanent as a temporary government program.’

Measures that seemed unthinkable a few months ago have been implemented in haste and without debate. In the UK, as in many other countries, the rationale changed. First, lockdown was designed to ‘buy time’ so the health service could prepare. Next, it was needed to ‘flatten the curve’. But when the curve peaked a few weeks later, the restrictions didn’t merely stay in place, they were reinforced.

Is the science on face masks weak? No matter, let’s make them mandatory anyway. Is there any evidence that closing borders has any meaningful effect on slowing the spread of the virus? With parliamentary debate suspended, no one will really ask. It was always a certainty that Putin or Xi would use any kind of Reichstag fire to grab more power, but it is very worrying to see similar behavior in liberal democracies.

COVID gave despots in China, Iran and Turkey the perfect excuse to monitor citizens’ movements through their cell phones. But the British government’s test and trace program also wanted to suck up private data and store it centrally. This was abandoned only when Apple refused to participate. Authoritarian leaders behind in the polls have postponed elections, but the trailing US President has also suggested that November’s election should be postponed, because otherwise ‘2020 will be the most INACCURATE & FRAUDULENT Election in history’. Hungary’s Viktor Orbán wangled the right to rule by decree from his compliant parliament, including the right to arrest individuals spreading ‘falsehoods’ about the virus. But the Swedish government also asked for emergency powers to bypass parliament with the wonderful argument that MPs can’t be relied upon to be awake and sober and ready to push the right button at short notice.

In every country, big government is here to help. It is as if the only way to kill the coronavirus is to drown it in red ink. The one remaining division between left and right is whether we should instantly throw everything we’ve got at the recession — or even more. According to Fitch Ratings, 20 major economies will spend $5 trillion this year on direct fiscal stimulus, and central banks even more to bail out the whole financial sector, including mortgage bonds and hedge funds. Britain’s national debt has now exceeded £2 trillion, over 100 percent of GDP.

The crisis has led to a new popularity for protectionism. The French always think that globalization has gone too far, but what’s surprising is that the Germans have shifted their position. Angela Merkel says that the pandemic has revealed a need for more European production and the bloc’s new industrial strategy talks about ‘an opportunity to bring more manufacturing back to the EU’.

Rapidly erected restrictions hurt access to essential labor and goods. When Poland shut its borders in mid-March, for example, Polish workers were stopped from getting to their factory in the Czech Republic, where they normally work to produce protective equipment for European hospitals.

These protectionist reactions to the COVID crisis are the result of a fundamental mismatch between our stone-age brains and the nature of the modern world. Instinctively rushing to put up or defend the perimeter and kill strangers made sense when the threat was a raiding band — but now?

H.L. Mencken once joked that the goal of much of practical politics is to keep the populace alarmed and hence clamoring for safety. He was referring to a human instinct. When we feel threatened, the danger often triggers a ‘fight or flight’ reaction, which makes us want to pick fights with scapegoats or foreigners or to hide behind walls or tariff barriers. And we start looking for the big man (or, in Scotland’s case, woman) to keep us safe. After that, few people want to be an outsider, a critic, a troublemaker. Those who protest against measures taken in the name of national safety are quickly shouted down.

But now that we’ve engaged in this massive experiment of shutting down societies and economies, surely we need a frank discussion about its merits and about whether these instincts are appropriate in a complex global economy. The enemy, after all, is a virus, not a raiding band. We shouldn’t bat away outsiders but co-operate with them in accumulating knowledge and producing solutions.

Consider the flurry of scientific papers rushed out and published for free on sites like medRxiv and bioRxiv. This is the greatest global scientific collaboration the world has ever seen, a global division of intellectual labor. Despite the Chinese government’s lack of transparency at the start of the pandemic, Chinese scientists were able to read the complete genome of the virus in just a week and publish it online. Six days later, German researchers had used this data to develop and release a diagnostic test to detect new infections. And when someone reveals the mechanism of the virus, the rest of the world can begin looking for its weaknesses.

This is happening at mind-boggling speed. Only three months after China admitted a new virus was on the loose, America’s National Library of Medicine listed 282 potential drugs and vaccines against it. Yes, governments have pushed some cash towards a favored remedy, but what we’re seeing here is scientific minds, the digital world and the English language adopted so that the planet can work together.

The striking point about the initial equipment shortages at the start of the pandemic is how quickly they were overcome. Even though governments came up with new barriers, the free market prevailed. Businesses made constant adjustments to manufacturing processes and supply chains to continue producing and rerouting supplies — and to keep goods on our shelves. Vodka distilleries and perfume producers began manufacturing disinfectants and hand sanitizer. Other businesses switched to producing medical gloves and surgical masks. In two months, the number of European companies producing face masks increased from 12 to 500.

These quick changes worked because they were not centralized. They depended on local knowledge about what can be done in a particular place, and more specifically, about what could be stopped without creating devastating shortages elsewhere. But here is the problem: a crisis tends to shift our thinking in a statist and nationalist direction at the precise moment when we need more openness to fight our way out of it.

How extreme will this backlash against globalization be? From the early days of the pandemic, nativist populists were quick to argue the only way to defeat the virus was to fundamentally undermine the liberal order. Steve Bannon, a historically minded nativist, understood that a total war against the virus could usher in a new isolationist era without trade and migration. ‘Take draconian action,’ he said on his podcast in March. ‘Shut it all down.’

Even if the COVID crisis does not mean the end of globalization, it seems inevitable that we will see greater government powers and more protectionist tendencies throughout the western world. Perhaps Britain will end up with a Brexit deal a lot less globally minded than some of its advocates imagined. The pandemic may shuffle the UK alongside Europe into a revived 1970s-style industrial policy that will reduce competitive pressure, innovation and growth. We could end up with an expansion of government size and its ‘temporary’ powers may end up permanent. Cities may live under threat of lockdown for some time. As Robert Higgs noted in his classic 1987 analysis of government expansion, Crisis and Leviathan, there is a ratchet effect. After the crisis has passed, governments yield some of their new powers, but not all. New measures set a new precedent and create new powerful constituencies. Look, for example, at the arguments to keep the furlough scheme beyond October.

And this is likely to be the case even if politicians want to return to normal. But many don’t. Why would they? When Orbán took emergency powers in June, it was underreported that at the same time he got parliament to grant him powers to impose a state of emergency if he identifies another public health threat.

But hang on, you might say, we’re living in unprecedented times — as politicians love to tell us — and they call for unprecedented action. But this pandemic is small by historical standards. Even now, the global number of deaths from COVID-19 is still lower than from the Hong Kong flu of 1968. But there was no lockdown, no mass school closures, nor did we throw ancient civil and economic liberties overboard. What’s new, this time, is our reaction, not the virus. Sooner or later we will face a worse pandemic or another devastating crisis. What would we be willing to sacrifice then?

I’ve just written a book called Open: The Story of Human Progress. It’s about how we create progress and how we destroy it. I argued that the golden eras of various cultures throughout history had two common denominators. They were all the result of societies and markets being relatively open, but all of them ended because at some point fear and crises — be they depressions, invasions, natural disasters or pandemics — resulted in authoritarian and protectionist backlashes. It’s the hope of every author to write something that seems prescient in the light of events. Unless, that is, you end up discovering a pattern consistent with the end of civilization.

But, of course, our story is not yet written. We do not need to stagger into an era of big government, strict restrictions and new borders: we can still be open. Our future can be — and will be — whatever we collectively choose. It’s still very much worth the fight.