Moralizing on social media from footballers, actors and politicians is doing harm 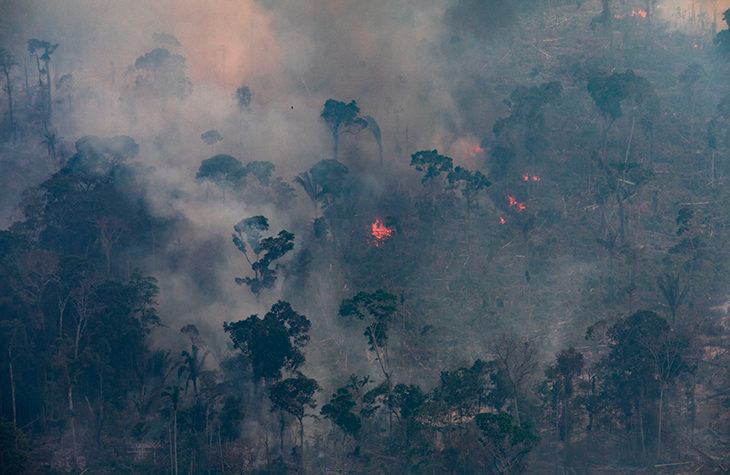 Cristiano Ronaldo is a Portuguese expert on forests who also plays soccer, so when he shared a picture online of a recent forest fire in the Amazon, it went viral. Perhaps he was in a rush that day to get out of the laboratory to training, because it later transpired that the photograph was actually taken in 2013, not this year, and in southern Brazil, nowhere near the Amazon.

But at least his picture was only six years old. Emmanuel Macron, another forest ecologist who moonlights as president of France, claimed that ‘the Amazon rainforest — the lungs which produce 20 percent of our planet’s oxygen — is on fire!’ alongside a picture that was 20 years old. A third bioscientist, who goes under the name of Madonna and sings, capped both their achievements by sharing a 30-year-old picture.

Now imagine if some celebrity — Donald Trump, say, or Nigel Lawson — had shared a picture of a pristine tropical forest with the caption ‘Amazon rainforest’s doing fine!’ and it had turned out to be decades old or from the wrong area. The ‘fact-checkers’ would have been all over it, seizing the opportunity to mock, censor and ostracize.

In fact, ‘Amazon rainforest’s doing fine’ is a lot closer to the truth than ‘Amazon rainforest — the lungs which produce 20 percent of our planet’s oxygen — is on fire!’. The forest is not on fire. The vast majority of this year’s fires are on farmland or already cleared areas, and the claim that the Amazon forest produces 20 percent of the oxygen in the air is either nonsensical or wrong depending on how you interpret it (in any case, lungs don’t produce oxygen). The Amazon, like every ecosystem, consumes about as much oxygen through respiration as it produces through photosynthesis so there is no net contribution; and even on a gross basis, the Amazon comprises less than 6 percent of oxygen production, most of which happens in the ocean.

It is probably true that President Jair Bolsonaro’s rhetoric has encouraged those who want to resume logging and clearing forest and contributed to this year’s uptick in fires in the country. But was it really necessary to claim global catastrophe to make this point, and was it counterproductive? ‘Macron’s tweet had the same impact on Bolsonaro’s base as Hillary calling Trump’s base deplorable,’ says one Brazilian commentator.

I sometimes wonder if the line wrongly attributed to Mark Twain, ‘a lie is halfway round the world before the truth has got its boots on’, is now taken as an instruction by environmental pressure groups. They operate in a viciously competitive market for media attention and donations, and those who scream loudest do best, even if it later turns out they were telling fibs.

Around the world, wild fires are generally declining, according to Nasa. Deforestation, too, is happening less and less. The United Nations’ ‘state of the world’s forests’ report concluded last year that ‘the net loss of forest area continues to slow, from 0.18 percent [a year] in the 1990s to 0.08 percent over the last five-year period’. A study in Nature last year by scientists from the University of Maryland concluded that even this is too pessimistic: ‘We show that — contrary to the prevailing view that forest area has declined globally — tree cover has increased by 2.24 million km2 (+7.1 percent relative to the 1982 level).’

This net increase is driven by rapid reforestation in cool, rich countries outweighing slower net deforestation in warm, poor countries. But more and more nations are now reaching the sort of income levels at which they stop deforesting and start reforesting. Bangladesh, for example, has been increasing its forest cover for several years. Costa Rica has doubled its tree cover in 40 years. Brazil is poised to join the reforesters soon.

Possibly the biggest driver of this encouraging trend is the rising productivity of agriculture. The more yields increase, the less land we need to steal from nature to feed ourselves. Jesse Ausubel of Rockefeller University has calculated that the world needs only 35 percent as much land to produce a given quantity of food as 50 years ago. That has spared wild land on a massive scale.

Likewise, getting people on to fossil fuels and away from burning wood for fuel spares trees. It is in the poorest countries, mainly in Africa, that men and women still gather firewood for cooking and bushmeat for food, instead of using electricity or gas and farmed meat.

The trouble with the apocalyptic rhetoric is that it can seem to justify drastic but dangerous solutions. The obsession with climate change has slowed the decline of deforestation. An estimated 700,000 hectares of forest has been felled in South-East Asia to grow palm oil to add to supposedly green ‘bio-diesel’ fuel in Europe, while the world is feeding 5 percent of its grain crop to motor cars rather than people, which means 5 percent of cultivated land that could be released for forest. Britain imports timber from wild forests in the Americas to burn for electricity at Drax in North Yorkshire, depriving beetles and woodpeckers of their lunch.

The temptation to moralize on social media is so strong among soccer players, actors and politicians alike that it is actually doing harm. Get the economic incentives right and the world will save its forests. Preach and preen and prevaricate, and you’ll probably end up inadvertently depriving more toucans and tapirs of their rainforest habitat.