Harris is good news/bad news for the Trump campaign 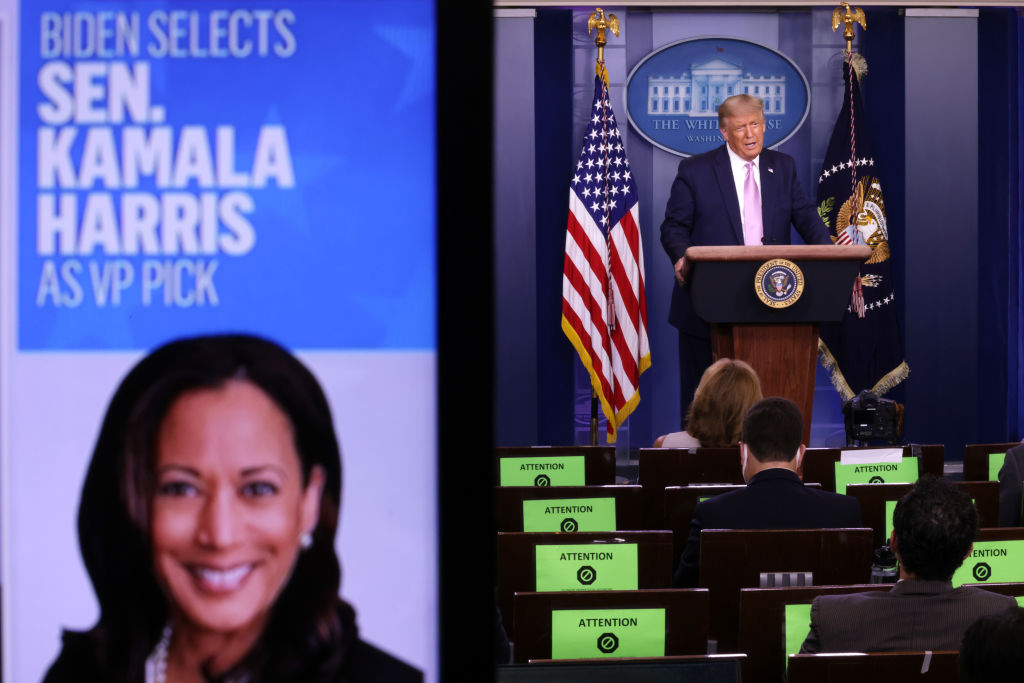 U.S. President Donald Trump speaks as a picture of Sen. Kamala Harris is seen on a screen, Picture credit: Getty

Harris is good news/bad news for the Trump campaign

Joe Biden’s selection of Kamala Harris as his running mate is a classic good news/bad news scenario for President Trump’s re-election campaign. First, the good news: as is the case with the top of ticket, you can employ the old horseshoe strategy against the senator from California. Hit ’em from the left, hit ’em from the right.

Harris is simultaneously too liberal in her policy preferences for much of the country and too insincere in the brand of progressivism she adopted as it became in vogue in the Democratic party. When it was fashionable even in California for Democrats to lock ’em up, she did so, few questions asked. When the way to get ahead was playing footsie with defund the police, she quickly adapted to that new reality too. Her record on this is nowhere near as lengthy as Biden’s. The former vice president and 36-year-long Delaware senator has ingratiated himself to the Democrats’ power brokers for decades, be they segregationists or socialists. But Harris’s chameleon-like political shape-shifting attracted the attention of Democratic primary voters, and accounts for why she did not last very long in the fight for the number one spot.

This is the campaign that many of those advising Trump clearly want to run. It is the one that worked against Hillary Clinton in 2016, terrifying conventional conservatives who thought she was some kind of revolutionary; demoralizing progressives who believed she was a corporate shill; and animating working-class whites and new populist right-wingers who understood her to be a little of both. Biden-Harris lend themselves well to replicating the same arguments four years later.

Now the bad news: against Biden, this particular campaign strategy hasn’t been working. On the surface it’s not terribly coherent to run against the criminal-appeasing anarchist Biden, who is also the architect of mass incarceration via the 1994 crime bill, and the Cop Kamala who wants to ‘reimagine’ (defund) the police. That’s not to say you can’t construct a rational argument for leniency towards those with substance abuse problems while showing harshness toward rioters. Fond memories of snatching up Al Capone on tax evasion notwithstanding, it is probably not sustainable for our criminal justice system — to whatever degree — to rely on imprisoning people we suspect, but cannot prove, are violent criminals for more easily proven nonviolent offenses. Neither is the sensible sentencing reform movement sustainable once the violence we see in Chicago and Portland begins to spread to the suburbs.

The above arguments are so reasonable that I happen to believe them myself. But election years are unkind to nuance and neither Trump nor Biden have an aptitude for it. The unfortunate reality is that Trump, as the incumbent, is blamed by different groups of voters both for failing to quell the riots and failing to unite a country pained by racial division following George Floyd’s death. His practice of tweeting loudly while carrying a small stick is satisfying roughly no one.

Secondly, Biden seems to be succeeding in one key area where Hillary failed: he has been able thus far to substitute any genuine enthusiasm for his own candidacy with the undeniably antipathy many feel towards Trump. This too is no doubt influenced by Trump’s incumbency. The biggest risk for Republicans is that the summer ends with half the country convinced that Trump should not be in charge of the country when things like a pandemic or urban civil unrest transpire — and that a sleepy old man and his conniving partner can hardly do any worse.