Weeks of government-sanctioned mayhem in the Rose City 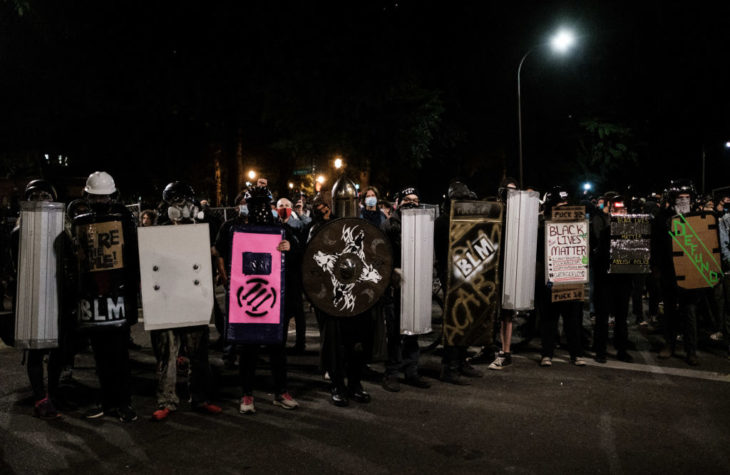 Portland has had one of the most turbulent histories of any town in America. At the time of the Great Depression it was as rowdy a riverfront port as Shanghai or Marseille, where some shopkeepers still took their payment in gold, women in tight skirts loitered in doorways on Salmon Street, and loggers drank and gambled away the afternoon.Then Portland enjoyed an economic boom, largely thanks to government shipbuilding contracts, and quickly cleaned up its act. If you happened to have visited from around 1945-65, you would have been struck by the long rows of neat clapboard houses, most with a US flag fluttering out front, and a waterfront area conspicuously free of girly bars and vomit. As if in recognition of its newfound respectability, Portland officially adopted the nickname of Rose City.Then came another volte-face, somewhere around the time of the Ford administration, when Portland reinvented itself as the Pyongyang of the Pacific Northwest, if with a few more trendy artisanal coffee bars than Kim Jong-un has to offer. With astonishing speed it rebranded itself as a bastion of progressive values, with a commission-based council and the only directly-elected metropolitan planning organization in the United States. In 1993, it also became the first American city to unveil a Climate Action Plan, with a whole raft of subsequent environmental measures designed to fight what was then called global warming — a commendably disinterested gesture on the part of a city where rain falls on around 170 days a year and the average high temperature in July struggles to get out of the seventies.It’s surely an ‘only in America’ story, where you can go from gritty, end-of-the-line Western outpost, to something out of Norman Rockwell, and then embark on a headlong rush to mirror the Chinese cultural model of 1966-76, all in the space of a citizen’s lifetime. Add the presence of a 40,000-strong downtown university — and, perhaps not coincidentally, a thriving drug scene — and you get some of the flavor of the place. Lots of people have tattoos and piercings, bikes are everywhere, and a Republican has about as much chance of being elected to public office as I do of becoming Pope.In November 2016, three days of protests in downtown Portland turned ugly when citizens took to the streets to express their unhappiness at the outcome of the recent presidential election. There were 113 arrests, 45 injuries, and an estimated $3 million in property damage. At the height of the carnage Portland’s mayor Charlie Hales went on air to announce that he fully supported people’s right to oppose the election result, although he added in passing that protesters should be wary of marching on freeways or railway lines as this ‘might be dangerous’ for them.Nothing, though, can compare for sheer government-sanctioned mayhem with the persistent Portland rioting that began with the May 25 death of George Floyd. There were the now familiar public displays of passion, with a generous quota of flag-burning — I once had to check my screen to confirm that this was Oregon and not Tehran — throughout early June. With summer, things deteriorated. Perhaps it was the untypical hot spell, or the end of all those online college classes, but Portland celebrated Independence Day this year in unusual style. The police twice declared a downtown demonstration to be a riot over the July 4 weekend. In the measured words of Chief of Detectives Chuck Lovell, ‘Officers responded when [protesters] threw bricks, mortars, M-80 firecrackers, and other flammables toward them.’ He added: ‘Portland deserves better than nightly criminal activity that destroys the value and fabric of our community.’These are words of wisdom unlikely to pass the lips of Portland’s current mayor Ted Wheeler. He blames the continuing violence squarely on the presence of plainclothes officers of the US Customs and Border Protection, among other federal agencies. ‘This is not the America we want,’ Wheeler rousingly announced. ‘We’re demanding that the President remove these troops [sic] that he sent to our city. It is not helping to contain or de-escalate the situation.’ I’m reliably told that the mayor’s tone while privately viewing televised scenes of masked rioters being arrested as they threw rocks through the windows of Portland’s downtown courthouse this week was considerably more colorful, and perhaps betrayed some of his youthful experience in the Oregon logging industry. ‘It’s a fucking nightmare,’ he remarked.

Wheeler is officially supposed to be nonpartisan, but seems to be embarking on a sanitized (and of course nonviolent) form of what Timothy McVeigh and his like-minded zealots once expressed in terms of hatred of the central government and rejection of its authority. He’s not alone in his aversion to the sight of federal agents patrolling the streets of Portland. Sen. Jeff Merkley of Oregon said the other day that the main problem currently facing his state’s biggest city wasn’t the presence of bomb-wielding radicals, but that of ‘paramilitary figures that you expect in a banana republic.” For her part, Oregon’s Gov. Kate Brown characterizes the situation as ‘very challenging’ — but, again, it’s all down to the feds. ‘Trump needs to get his officers off the streets,’ she declared this week.There’s something peculiar going on when indiscriminate attacks on the national government, the only real locomotive that can haul us out of the third-world cloaca we’ve recently fashioned on the streets of our cities, are freely aired because they play to the vindictive public mood. On what could be called the philosophical plain, it’s a stance motivated by moral revulsion at something called systemic racism. At street level, it expresses itself in the nightly sight of hundreds of masked demonstrators, predominantly white and male, collecting in downtown Portland in order to pelt police with rocks and urinate on the steps of the courthouse. Mayor Wheeler has told us how sorry he is about this state of affairs, but at least he can solace himself by decamping to one of his three luxury homes bought with the proceeds of the family timber business and his own career as an executive at the same Bank of America that helped trigger the great economic meltdown of 2008.Meanwhile, it’s been 56 days of hell, and counting, for America’s Rose City.