How significant are Trump’s trade talks with the EU?

The President is declaring victory on the European front of his incipient trade war. 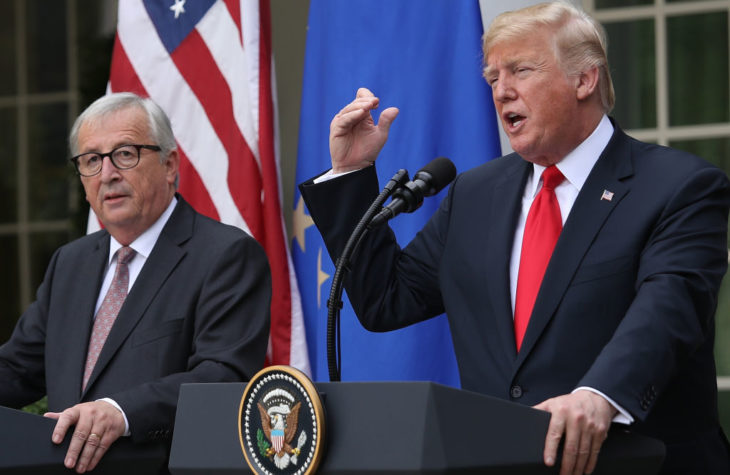 How significant are Trump’s trade talks with the EU?

President Trump’s announcement Wednesday of a trade breakthrough with the European Union was like the summit with North Korea but on a much smaller scale.

It was a step back from the ledge after Trump himself contributed to the ratcheting up of tensions. Whether it translates into anything substantively remains to be seen.

No, we’re not talking about nuclear weapons as was the case with North Korea. And the trade war with China is more consequential than the haggling with the EU.

But just as Trump was seen as risking conflict with “Little Rocket Man” Kim Jong Un, he’d described the EU as a “foe.” With farmers smarting from retaliatory tariffs to the degree that they required a $12 billion bailout, there was a lot of concern about the impact of steel and aluminum tariffs on our allies.

The meeting with European Commission President Jean-Claude Juncker represented a climbdown from a perilous situation and created breathing room for further negotiations. But just as we are a long way from complete denuclearisation of the Korean peninsula, increased soybean sales don’t quite deliver zero tariffs on industrial goods. That will have to come later, if at all.

Trump hailed the talks as a “big day for free and fair trade,” just as he played up his dialogue with Kim and the dismantling of a North Korean missile site. Yet most of the work remains to be done and we are left with a question: Did Trump’s policies and tough talk force his negotiating partners to the bargaining table or merely exacerbate a bad situation that he was later able to marginally tamp down?

It matters as Trump is pleading for patience from Republicans who disagree with him on tariffs and agricultural bailouts while remaining skeptical of his diplomatic overtures abroad. “When you have people snipping at your heels during a negotiation, it will only take longer to make a deal, and the deal will never be as good as it could have been with unity,” the president tweeted. “Negotiations are going really well, be cool. The end result will be worth it!”

Trump is arguing that his tariffs will inflict temporary pain while leading to long-term gains in American access to foreign markets. Right now, he is declaring victory on the European front of his incipient trade war.

“Great to be back on track with the European Union,” Trump tweeted, later adding, “European Union representatives told me that they would start buying soybeans from our great farmers immediately. Also, they will be buying vast amounts of [liquefied natural gas]!”

Time will tell whether such declarations prove premature.