Je suis Charlie and the legacy of jihadism 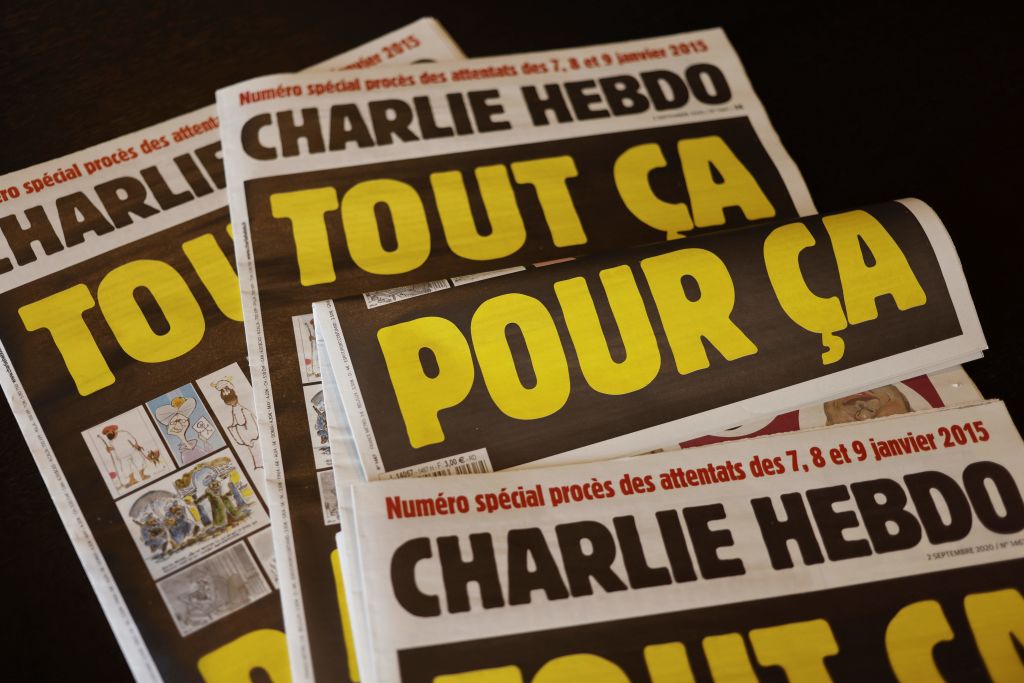 Je suis Charlie and the legacy of jihadism

‘You have insulted the Prophet — we are al-Qaeda Yemen.’ These words, terrifying yet clichéd, were spat at a female cartoonist just moments before the massacre of 12 people in and around the offices of the magazine Charlie Hebdo in Paris on January 7, 2015. Their crime? Drawing.

The trial of those accused of abetting the slaughter continues in Paris this week. We should all be following. That this harmless activity, favored mainly by schoolchildren, architects and retirees, now carries a death sentence to be meted out by any degenerate with a warped adherence to seventh century religious texts is a societal evolution not to be ignored. Of course, it’s only the alleged secondary culprits who made it this far. The killers, two brothers, named Saïd and Chérif Kouachi, chose suicide by cop just 48 hours after the murders.

The Kouachis were banal in their inadequacies: broken home, urban alienation, crime and the inevitable radicalization in prison. But we must turn our face toward them. I have sat down with Islamists and jihadists on several continents and I know these two for what they were: a very western creation.

We must internalize the truth of this fact. Jihadism is here; it’s not leaving anytime soon, and we need to understand it so we can better fight it. (Its total eradication is now, I fear, just a pleasant dream). In this spirit, I recently read Incitement: Anwar al-Awlaki’s Western Jihad by Alexander Meleagrou-Hitchens (son of the late Christopher). It’s an outstanding book on the subject and has much to teach us on the nature of homegrown jihadism.

Meleagrou-Hitchens argues that the Charlie Hebdo massacre exists in a pantheon of indigenous jihadist acts that includes many of the most egregious atrocities of recent years. A US army major who killed 13 in a mass shooting at his base at Fort Hood, Texas; a young Western-educated Nigerian Muslim who tried to use a bomb hidden in his pants to bring down a US-bound jet from Amsterdam; a British-Bangladeshi woman who repeatedly stabbed her local MP in London. And on and on and on it goes.

All of these cases of western jihadist terrorism, he notes, ‘appear disconnected in any formal organizational sense.’ But they are linked ‘through a set of ideas introduced to them by…the al-Qaeda ideologue and strategist Anwar al-Awlaki.’

Western jihadism is comparatively recent, and its expression often markedly millennial. Like Kanye, it’s a product of the Zeitgeist. And so was al-Awlaki. Born in New Mexico to Yemeni parents, he began his career as an Islamic preacher in Colorado before moving to Virginia, all the while making a name for himself on YouTube. He came to public attention by condemning 9/11, and eventually left the United States for a brief stint in the UK where he spoke at the East London Mosque. He ended his days as a fully-fledged al-Qaeda ideologue exhorting jihad from the deserts of provincial Yemen until the Americans droned him. Globalization, multiculturalism and radicalization, all tied neatly together via violence and social media: it’s the contemporary western jihadist model.

Nowhere is al-Awlaki’s influence more immediately felt than with the Charlie Hebdo massacre. He was the first al-Qaeda ideologue to make a full, theological case for killing people deemed to have insulted Islam — the ‘crime’ for which the cartoonists were murdered. And he was, according to Cherif Kouachi, integral to the attack. ‘I was sent, me, Cherif Kouachi, by al-Qaeda of Yemen. I went over there [in 2011] and it was Anwar al-Awlaki who financed me,’ he told BFM-TV. during the standoff with police that preceded his death.

If Charlie Hebdo marks the full (posthumous) bloom of his jihadist activity, it was in the UK that al-Awlaki really began to find his niche: repackaging jihad to westerners. He arrived in London in early 2003, a dark time for relations between some British Muslims and the state. The war in Afghanistan was smoldering; the country was gearing up to go to Iraq, in opposition to mass protest. It was, as Meleagrou-Hitchens notes, a fertile time for Islamists to create divisions and recruit.

He tried to personalize the idea of a war on Islam (that 9/11 had given credence to in certain circles) for Western Muslims, who weren’t, after all, being bombed in Afghanistan or harassed in the West Bank. So he began to focus on incidents like the alleged police assault of terror suspect Babar Ahmad (who went on to spend eight years in prison without trial), and the British government’s plans to allow detention for terror suspects without charge. He brought the ‘war’ home to them, riling them up in speeches. And from there he never looked back.

What al-Awlaki did more than any other western jihadist preacher was to establish a western iteration of the global jihad movement that was no longer dependent on importing foreign preachers and ideas. He created a jihadist subculture that now exists across many western societies — not least France — and that speaks directly to people born and raised in the west like the Kouachis.

This changed everything. It produced British and French and Belgians ready to murder their fellow citizens; and, as Meleagrou-Hitchens noted to me, it created a pool of ideologically-primed recruits for Isis. People who will still be there the next time a jihadist group comes knocking. Until this inevitability, there are certain words that we must never allow to descend to mere platitude: je suis Charlie. Never forget.