What won’t female politicians do for a sniff of power? 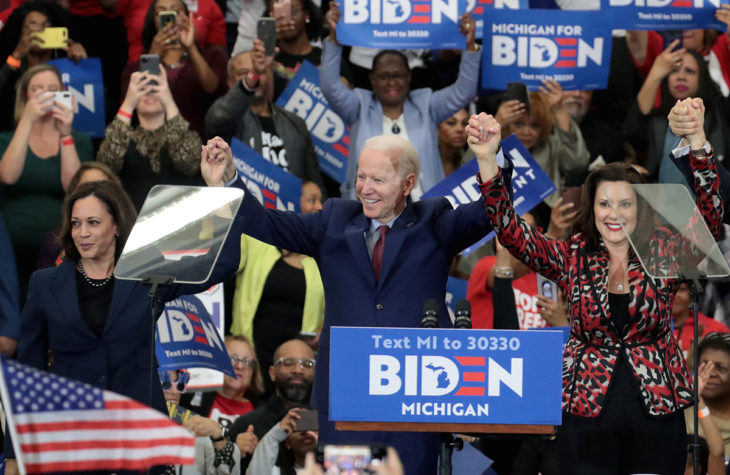 As we inch closer to the Democratic National Convention in August, the question looms ever larger: who will Joe Biden choose as his running mate?

Running mates are usually chosen to inoculate the party’s ticket from a vulnerability. in 2008, for instance, Sen. Biden was the career statesman running mate chosen to cover for Barack Obama’s inexperience.

In 2016, Mike Pence was the evangelical bonafide Republican picked to help Donald Trump the outsider. Biden’s team knows he must pick someone who will act as a human shield against his biggest issue: women.

Despite every Democratic ticket since 2000 championing women’s rights, Biden’s name brings up his awkward role in the Clarence Thomas hearings, a sexual assault accusation, and years of claims that he has made women feel uncomfortable.

Only twice before has a woman been picked to be VP. On both occasions, the ticket with a woman was defeated.

Counterintuitively, Biden’s seemingly well-intentioned promise to choose a female running mate has proven to be a bit of an embarrassment in the larger scope of ‘women’s empowerment’. His declaration has led to some candidates parading themselves in public, effectively bending over backwards to be the chosen one. Such displays reverse years of hard work both in the women’s liberation movement, and now, the #MeToo movement. It is setting feminism back decades, in fact.

There are a lot of opinions as to which woman should be picked, but only more recently has it emerged who has auditioned. One is Stacey Abrams, former Democratic candidate in Georgia’s 2018 gubernatorial race. Despite her loss in Georgia, media coverage has kept her consistently visible, giving the impression that all other potential candidates will have to battle her for the position.

The undeniable truth about Stacey Abrams is that she is woefully unqualified. She’s the equivalent of a contestant on The Bachelor with a deep-fried voice that everyone knows isn’t a good fit for the guy, but, since she likes to make a scene, they keep her around into the final weeks just to improve ratings. Abrams’s inexperience is overlooked, of course, because the Democratic party has to check off the identity-politics boxes and atone for their sin of electing another old, white, male as their candidate.

Amy Klobuchar, a white woman, proved to be a surprisingly popular candidate in the 2020 Democratic primary and it was reported just last week that Biden was in the process of vetting her as a potential partner. There seems to be little controversy with Klobuchar. The salad-gate incident and her relentless pride in giving a speech during a Nor’easter snow storm is about as dangerous as she is going to get (unless Biden ends up being pelted with office supplies.) Since the news of her vetting, there have been reports of groups opposed to Klobuchar based solely on the idea that she is not diverse enough. Despite being one of the stronger contestants, she may get the snub because of the color of her skin.

Which brings us to Elizabeth Warren, the Massachusetts senator and media favorite. Warren had been the candidate who was gung-ho on grassroots fundraising, demolishing corporate greed, and advocating for Medicare-for-All. Not anymore. In an attempt to appeal to Biden and his people. Warren has done a complete reversal on her most prominent positions. She sold out faster than toilet paper during a pandemic. She’s doing all this out of desperation for an electoral future, but, like Klobuchar, she also may not be diverse enough. Who knows, maybe that desperation will make her do something unprecedented like concoct a vibrant ethnic history just to get the job? Oh wait…

The worst part is that all these prominent women who championed ‘believing all women’ when it came to accusations of sexual assault are now having to shrug off Biden accuser Tara Reade in order to fall in line. Warren, Klobuchar, Abrams, Kamala Harris and others have downed the feminist cudgels they swung with abandon during the 2018 Kavanaugh hearings in order to comply with party unity.

The battle for VP has become a strange one. It has pushed women into a position where they feel they have to be subservient to the old white man’s needs. They have been forced to declare, publicly, what is more important to them: principles or power. Sadly, power seems to be leading that poll and we are left watching these women voluntarily stand before the pundits in order to be ranked by appeal, style and fame, rather than their true qualifications. What would have been an insult to these proud feminist warriors during their primary days has become something they are willing to sacrifice at the altar of the progressive expediency.

The old fight was for women to be heard as equals and have their record examined critically and earnestly. Now it’s all about who offers the most glamorously politically correct portrait to sell to the public. In a week when Biden jibed that someone is not really ‘black’ if he considers voting for Trump, you would suspect primary candidate Sen. Harris or crusading social justice warriors like Abrams would have issued their own comments on the matter. After all, Harris was so vocal in Biden’s record on race when she was running against him.

This only highlights that Biden himself the weakest link in the hopes of the Democrats taking back the White House. If the Democrats were honest, they would vet their VP candidates based on substance, address Biden’s obvious shortcomings, and ignore his demeaning, patronizing declaration to select a female running mate, as if he were choosing a new accessory to accent his campaign fashion.

Come election day 2020, Democrats may realize that the best VP choice to protect Biden from all his many vulnerabilities with voters would have been a magician with the power to miraculously make decades of gaffes and poor policy choices simply disappear.