John Bolton is the problem 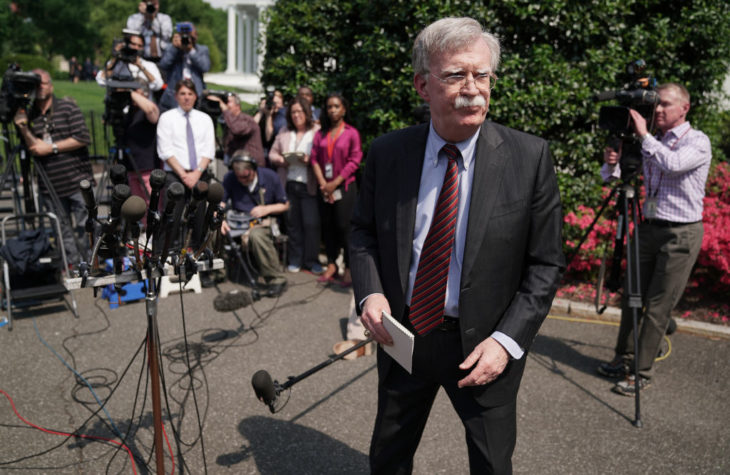 John Bolton is the problem

Thanks in large part to John Bolton, America, the global cop, is back on the beat. This time it’s the Caribbean and the Persian Gulf in a near-simultaneous demonstration of resolve.

For Bolton, President’s Trump national security adviser, Venezuela is an exceptionally appealing target. Juan Guaidó, the democratic socialist who is Washington’s choice to lead Venezuela is dutifully following Bolton’s script asking for US military intervention to install him and his followers in power.

Why not? Venezuela harbors a few hundred Russian Special Operations Soldiers and at least 2,000-3,000 Cubans. Crushing the pathetic Venezuelan Armed Forces would be another exercise in clubbing baby seals on the Iraq or Afghan model.

Venezuela might also be the last place on the planet where a carrier battle group can sit just offshore in support of a marine amphibious assault. Against any capable opponent these operations would end quickly, far out to sea, in volleys of precision guided missiles and submarine attacks, but Venezuela is naked in the face of US military power. At most, Venezuela offers the potential for a low-level civil war launched from the interior on the Afghan model.

True, Moscow could escalate horizontally meaning that Russian forces could provoke an incident in the Baltic Littoral, particularly in Estonia where large numbers of Russians legally reside. In Ukraine, Russian air and ground forces could move suddenly to seize Odessa and establish a Russian military presence on the Romanian border. Putin, after all, plays chess, not checkers. But that’s not likely, is it?

Iran’s economy is reportedly on the verge of collapse. Iran is in a deep recession and inflation is running at about 40 percent, yet Iran still presents a threat to its neighbors serious enough in Bolton’s words to warrant ‘maximum pressure’ to suppress Iran’s appetite for war — the USS Abraham Lincoln Carrier Strike Group and a bomber task force.

Why not? Iran’s defensive capabilities are modest, though still robust enough to sink a few ships and damage a carrier. If provoked, Tehran may simply conclude it has nothing to lose, but it’s not Iran’s capabilities that worry US military planners.

Russia is very unlikely to tolerate an American military intervention against Iran. US forces already sit on Russia’s borders and routinely sail close to Russia in the Baltic, the Black Sea and the North Pacific.

Iran may well be Putin’s line in the sand. Moscow’s space-based assets would share intelligence with Tehran. Russian ground, air defense and aerospace forces would move rapidly into northern Iran. Russian submarines would show up in short order in the Indian Ocean and the Mediterranean.

Beijing is equally unlikely to sit still given its dependence on Iran’s role in developing China’s ‘One belt, One Road initiative.’ It’s already done so. The unmanned aircraft diverted to Iranian control did not find its way into Iranian hands without Chinese assistance.

How fascinating it would be to sit in the Oval Office when Bolton explains these unanticipated developments to President Trump, who ran on none of this? Senior advisers like Bolton who urge presidents to initiate military action always express confidence that the opponent, especially, a weak opponent, will back down, or, at most, put up weak resistance.

We’ve all seen this movie before in 1965, 2001 and 2003. The ability to employ military power, not the valid strategic need to do so, seduces presidents. In the history of the West, few advisers acquired fame urging their sovereigns to go to war, but one stands out — Don Gaspar de Guzmán, Count Duke of Olivares ― principal adviser to Spain’s King Philip IV.

Like his King, in 1621 Olivares was an ardent Catholic determined to restore Spain’s formerly uncontested military and political hegemony at any cost. Given that 40 percent of Spain’s national income was annually diverted to service Spain’s enormous national debt cost was not a small matter.

No matter, Olivares waged sporadic war against Britain, Holland and the north German Protestant states on and off for 20 years. Seeing Spain dissipate its military and economic power in the Americas and Europe, another ambitious minister in Paris named Richelieu decided in 1631 the timing was auspicious for France to ally with Sweden, Holland and Savoy against debt-ridden Spain and its overstretched army and navy.

Spain was suddenly in a two-front war that it could neither easily win nor afford. More important, at home, Olivares’s appetite for war increased taxes, and fomented rebellions against the Spanish crown in Catalonia and Portugal. Spain’s overseas military commitments meant that King Philip could not prevent Portugal’s independence. Spain faced an existential crisis.

King Philip removed Olivares from office, but the proverbial die was cast. Within a decade, it was clear that Spain must surrender its military and economic dominance to France or face total collapse. Today, Olivares is forgotten, but King Philip IV is infamous in European history for leaving Spain in a state of financial, political and military exhaustion from which Spain never recovered.

If any of John Bolton’s current military ventures trigger a confrontation with an alliance of Russian, Iranian, Chinese or even Turkish military power, on the Richelieu model President Donald Trump, not John Bolton, will be thrown under the bus. John Bolton will just shrug his shoulders as he did after the Iraq debacle and say, ‘Intervention was still the right call.’ He’ll simply return to his old job at the American Enterprise Institute, Foundation for the Defense of Democracy or another of the many neocon-friendly think tanks.

Donald Trump can’t do that. He needs to stop and think. Does he want to be remembered like President Eisenhower as having cultivated peace, prosperity and strength? Or, would he prefer to be mentioned in the same breath with President George W. Bush? Dubya was the president who ‘exported death and violence to the four corners of the earth’ with disastrous consequences for the United States and its economy.

The choice is clear.

Douglas Macgregor, PhD, is a retired US Army colonel and the author of five books, including the most recent, Margin of Victory (Naval Institute Press, 2016).

Douglas Macgregor, PhD, is a retired US Army colonel and the author of five books, including the most recent, Margin of Victory (Naval Institute Press, 2016).