Why men pay for sex, and why they shouldn’t

Increasing numbers of countries are treating johns as sexual predators 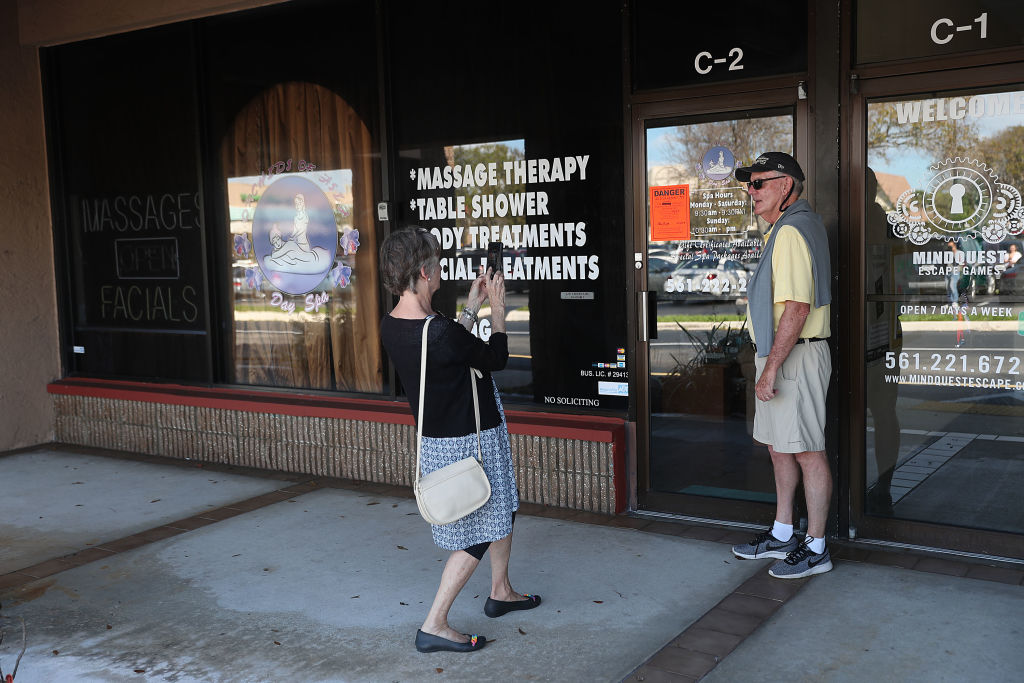 JUPITER, FLORIDA – FEBRUARY 22: Mike Walsh has his picture taken near the front entrance to the Orchids of Asia Day Spa after New England Patriots owner Robert Kraft is charged with allegedly soliciting for sex on February 22, 2019 in Jupiter, Florida. Mr. Kraft was caught up in a law enforcement operation in South Florida that netted hundreds of johns over the past two weeks.(Photo by Joe Raedle/Getty Images)

Why men pay for sex, and why they shouldn’t

When Robert Kraft, the billionaire owner of the New England Patriots, was charged with two first-degree misdemeanor counts of soliciting a prostitute at the Orchids of Asia massage parlor, the question on many lips was, ‘Why would a wealthy, famous man risk his reputation to pay for sex?’

Jenni, who was sold for sex at Orchids in 2017, tells me that outside the massage parlor where Kraft was arrested, tourists have been spotted taking selfies, either oblivious or uncaring about the fact that inside the building, enslaved Chinese women were forced to perform sex acts on men for money – money which went straight to their pimps.

The women in the Orchids brothel were forced to sleep on massage tables, were not allowed to leave and had no access to transportation. Some had their passports taken away and were forced to tolerate sex with as many as eight men a day.

Kraft has denied all the charges against him, pleaded ‘not guilty’ and requested a jury trial. Several other wealthy businessmen were also arrested during the brothel raid, as well as a number of others. Those arrested ranged in age from 30 to 81, and, according to Dave Aronberg, the state attorney in Palm Beach County who pressed charges, ‘They come from all walks of life: There’s rich and poor, there’s young and old.’

‘Johns who paid for sex with these women should be charged with aggravated sexual assault for raping kidnapped women,’ says Jenni. Increasing numbers of countries are treating johns as sexual predators, and criminalizing the very act of paying for sex, while considering the women they buy or attempt to buy as victims. Known as the ‘Nordic Model’ because it was first introduced in Sweden in 1999, and closely followed by Norway and Finland, it is now operational outside of the region, for example on both sides of the Irish border, and in France.

The findings of a US-wide survey, outlined in a report, ‘Who Buys Sex? Understanding and Disrupting Illicit Market Demand’ might help the general population appreciate why prostitution is not a victimless crime, and how the sex trade is driven by the demand and not the supply side.

Demand Abolition, a US-based group that campaigns against the sex trade, commissioned a survey about johns and their behavior, interviewing 8,201 adult men across the US. As ‘quality control’, a number of women who were previously involved in prostitution (sex trade survivors) were asked to give their views on the research and to help come up with recommendations for change.

How common is paying for sex in the US? Despite the creeping normalization of prostitution, which, in popular sanitized parlance is commonly referred to as ‘sex work’, the majority of men choose not to pay for sex.

Demand Abolition found that on average, men who buy sex spend a minimum of $100 per sex act, which goes towards an estimated $5.7 billion profit from prostitution. Buyers use illicit massage businesses, the street and online to buy sex. High frequency’, or entrenched, regular buyers drive the market and typically earn $100,000 or more annually. Regular buyers are more likely to be younger.

I have heard a variety of justifications by johns that tally with the findings of the research. Many convince themselves that the women enjoy it; that if they don’t have sex they will spontaneously combust; and that they are merely looking for a little ‘variety’.

So, why do men pay for sex? According to the research, motivation is varied, but the increasing normalization and sanitization of the sex trade, such as the propaganda promoted by pimps and other profiteers that would have us believe that buying sex is the same as paying for a beer and a burger, removes the stigma from the men, and provide a clear conscience.

In Berlin recently, home of the mega-brothel, I came across a sign advertising a ‘beer, blood sausage, and as many girls as you can manage’ as a lunchtime deal for €60. Prostituted women are marketed alongside food and booze, and in turn, become nothing but a consumable item in the mind of the john.

Some even see themselves as saviors. ‘At least (now I have paid her for sex) she can feed her kids and buy them shoes,’ one john, who openly admitted paying for sex with a street prostitute that ‘looked in a bad way’, told me. Another said, ‘If women could give full satisfaction to husbands and boyfriends, then men wouldn’t go to prostitutes.’

‘If I wasn’t able to have sex with a prostitute and was frustrated, I might have to go out and attack a real woman.’ The ‘real’ woman that this sex buyer was referring to was a woman who wasn’t prostituted. I have heard the same thing said by sex buyers, by women in prostitution, pimps and by members of the public.

Research by Dr Melissa Farley, a psychologist and academic based in San Francisco, found that the attitudes and behaviors of regular johns are similar to those that are common among sexually aggressive men. ‘College-aged men who used women in prostitution reported having committed more sexually coercive behaviors than men who had not used women in prostitution,’ says Farley.

Marian Hatcher is a sex trade survivor based in Chicago. Hatcher is employed as a victim advocate by the anti-trafficking division of Cook County Sheriff’s Office, and was one of the peer reviewers asked to provide feedback on the research findings. For Hatcher, finding what would deter the johns is key.

‘Better understand who buyers are and what leads to (and helps put a stop to) buying behavior,’ says Hatcher, ‘and we can work towards ending demand. End the demand and there will be no impetus for traffickers and pimps to supply the women.’

The key recommendation of the report is to shift the limited resource law enforcement has from seller to buyer. Funding programs to support state and local agencies to address demand. Fund survivor exit services and law enforcement demand reduction operations from fines collected from buyers. Increase fines and penalties for repeat offenders.

Targeted education, healthcare and media effort to combat the normalizing of sex buying. Establish zero tolerance employer policies prohibiting sex buying under any circumstances, including activities on company time or with company resources that are related to sex buying. Targeted prevention campaigns and focus deterrence communications to change behavior.

Recently there have been moves to make New York the first state to decriminalize all aspects of the sex trade. While Hatcher, along with other feminists that wish to see an end to the sex trade, campaigns for an end to the criminalization of the women, she is well aware of how disastrous legalization is.

‘Any deterrent of johns must be applied to both the illegal and legal sex trade. Together they promote the commodification of human beings, promoting violence against women and girls. Systems of prostitution must be eradicated as a whole.’

In 2012, I spent a week with notorious pimp Dennis Hof, owner of five legal brothels in Nevada. Hof, who died last year, told me that, ‘The men that come here are like any consumers. They could be buying a car, or just anything that gives them pleasure. It just so happens they are buying some top-grade pussy.’

Despite the argument that legalizing prostitution makes the johns less violent and more respecting of the women, those I met during my week in Nevada, and the many I have interviewed and observed in the legal brothels of Holland and Germany, appear more arrogant and disrespectful than those that risk arrest under prohibition.

During my most recent research trip to the notorious window brothel area of Amsterdam known as De Wallen, I met two young men walk along the narrow lanes, gawping into the windows. While his friend popped into one of the tiny brothels for sex, the other agrees to speak to me.

Alex started paying for sex when he was 12 years old. ‘It is so normal here’, he says. ‘In America you have it, in England you have it, but here it is different because it is legal. I come here once a month if I can afford it. I only get charged €20 because I know all the girls and I am a local, but the tourists pay €50. For everything. Most of the women have pimps or lover boys, but who is going to do anything if they are unhappy? Nobody will.’

Holland, where the sex trade was legalized in 2000, is full of johns like Alex – young men who feel perfectly entitled to buy their way into a woman’s body, and not give a damn that she is only consenting out of desperation.

The notion that the inside of a woman’s body can be a ‘workplace’ and that selling sex and being penetrated by multiple strangers a ‘job’ or ‘profession’ is a myth. There can be no ‘humane conditions’ or ‘health and safety’ involved in prostitution, and what’s more, the johns know it.

What can be done to change hearts and minds, and to deter men from becoming johns? One move that would make a significant difference would be to shift police time and resources away from the women, and to consider them as victims of abuse rather than as criminals, and to focus on arresting the johns. I know from experiences that men can be quite easily deterred from such activities if they fear their wives, kids and bosses might discover what they are up to. Any fine given to the johns if they are arrested should be filtered directly into services to help women get out of the sex trade. For all the ‘happy hooker’ mythology that’s propagated by the industry profiteers, very few indeed would choose to stay in the life if they had a chance to leave it behind.

Nothing bad will happen to men who opt out of paying for sex. For all the nonsense about not being able to control sexual urges, men know fine well that they can keep it zipped up if they really want to. My advice to the entrenched johns, the ones that say they really can’t stop themselves. Get a real date.