Why lockdown skepticism is growing in Japan

The Japanese, masters of the art of face saving, may be giving us a model of how to move out of corona restrictions painlessly 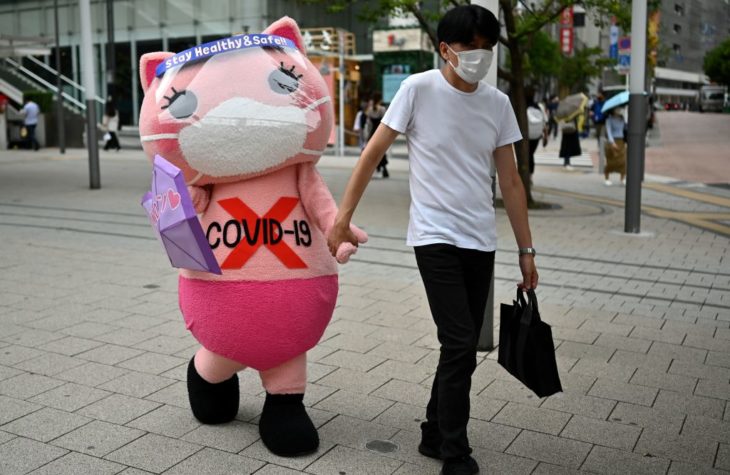 Why lockdown skepticism is growing in Japan

‘We all know it’s bull and we’ve had enough.’ This is not the kind of language I have come to expect from the Japanese. But this protester, who lived for 12 years in Reading, which accounted for his excellent, if rather fruity English, was clearly angry. He was one of hundreds outside Tokyo’s Shinjuku station last week, attending the latest in a series of small but significant demonstrations of the growing COVID-skeptic movement.

The gatherings may not have been huge, but it is noteworthy that they have taken place at all in a country generally regarded as a COVID success story (‘only’ around 2,000 deaths so far, and limited restrictions). This is especially true as protesting is regarded by many here as selfishly disruptive (in Japan, strikes often take place at weekends, so as not to inconvenience anyone). What is also remarkable, given how much they are fetishized in Japan, is seeing a large crowd entirely without face masks, which in winter would be odd even if there weren’t a nasty virus wafting around.

Three distinct but cooperative protest groups have formed recently in Japan, with the largest demonstration so far being the 800 who gathered outside the Diet building last month (almost totally unreported in the media). There was also a no-mask subway ride, which saw a group of dissidents taking to the train to show their contempt for the ubiquitous cloth coverings that have become, if not a de jure requirement, certainly de rigueur.

The major bones of contention are similar to those in the west: a perceived attack on civil liberties, the barrage of statistics from an allegedly biased media, and the potential dangers of what critics see as a prematurely approved vaccine. The big hit to Japan’s economy earlier this year (even if things have rebounded more quickly than the US) is also causing tensions.

Yet what is slightly different here is the focus on children. Many of the signs at the protest were from women calling for ‘children to be left out of it’ a response to the restrictions on education (Zoom classes), social distancing (no hugging), and the pressure to mask up even infants in the name of ‘defeating the virus’.

Like in Western countries though, the resistance here suffers from the lack of a high-profile universally respected figurehead. The best-known activist skeptic is Takafumi Horie (known as ‘Horiemon’, a reference to his physical resemblance to the robot cat ‘Doraemon’), a former tech whiz kid who served time in jail for a trading scandal. He has an ally; if that’s the right word, in Takashi Tachibana the leader of the fringe political party with the unwieldy title ‘defend the people from NHK’. A former NHK employee and whistleblower, his party managed to win one seat in the House of Councilors (on a proportional representation vote) in 2019. He is nevertheless widely regarded as something of a laughing stock.

The Shinjuku station demo attracted no attention whatsoever from the police but plenty of support from passers-by. The organizer I spoke to believes many more Japanese are outright skeptics, and tempted to join the movement, but reluctant to show their faces, as it were, at demonstrations such as this for fear of social ostracism, or even sanctions from employers. ‘It’s not a good look,’ he said.

However less visible, but potentially more effective campaigns have been taking place. A Mumsnet-style rebellion against the closure of universities saw parents bombarding campuses with complaints, and there have been reports of a Zoom strike from students. Many universities have been pushed to confirm that face-to-face tuition will return next term, regardless of COVID case numbers.

In Osaka and Sapporo, where positive test numbers have risen, bars and restaurants have simply refused to comply with early closure orders. And in a nation with more restaurants per capita than virtually any other, it will be almost impossible for police to do much about this, even if they were minded to — and it doesn’t seem as if they are.

Polling numbers are also interesting. According to Nikkei, 57 percent of respondents supported a government approach that ‘addresses public health risks in a way that is compatible with maintaining the economy’ (if only UK polls offered that option!), with only eight percent favoring a policy focused solely on public health.

Japan’s new PM Yoshihide Suga seems to have listened: he has so far stood up to pressure from the health advisory board to curtail the ‘Go to Eat’ and ‘Go to Travel’ campaigns, which have done much to boost the internal tourism and hospitality industries.

Though the protests look likely to continue and may well grow, they will probably not be what restore the country to full normality. Instead, the Japanese, masters of the art of face saving, may be giving us a model of how to move out of corona restrictions painlessly. In short, it is this: allow the politicians to make their grave pronouncements and tinker with minor unenforceable restrictions. And then just ignore them entirely.