Why have so many of our recent viruses come from bats? 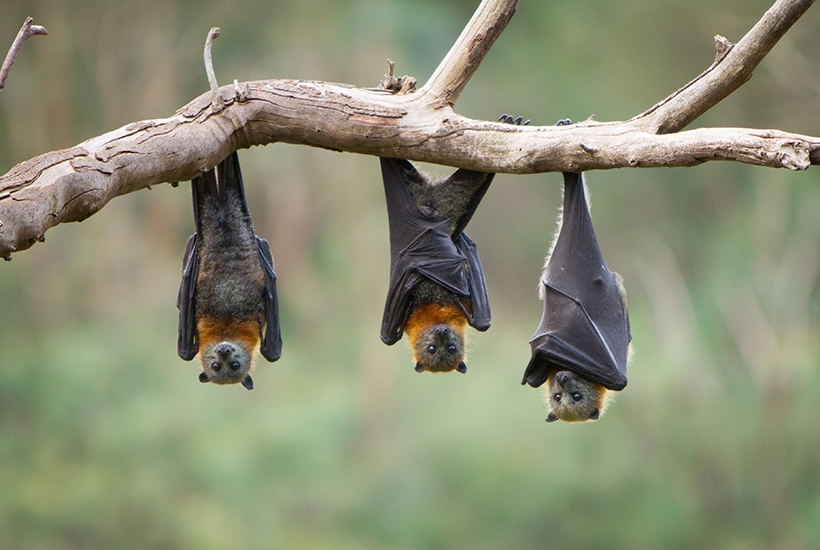 Why have so many of our recent viruses come from bats?

I’m no Nostradamus, but 20 years ago when I was commissioned to write a short book about disease in the new millennium, I predicted that if a new pandemic did happen it would be a virus, not a bacterium or animal parasite, and that we would catch it from a wild animal. ‘My money is on bats,’ I wrote. We now know that the natural host and reservoir of the new coronavirus, Covid-19, is a bat, and that the virus probably got into people via a live-animal market in Wuhan.

This is not the first disease bats have given us. Rabies possibly originated in bats. So did, and does, Ebola, outbreaks of which usually trace back to people coming into contact with bat roosts in caves, trees or buildings. Marburg virus, similar to Ebola, first killed people in Germany in 1967 and is now known to be a bat virus. Since 1994 Hendra virus has occasionally jumped from Australian fruit bats into horses and rarely people, with lethal effect. Since 1998 another fruit-bat virus, Nipah, has also infected and killed people mainly in India and Bangladesh. Sars, which originated in China in 2003, is derived from bats, though possibly via civet cats. So is Mers, a similar bat-borne coronavirus that’s killed hundreds of people and camels in the Middle East since 2012.

All these have high mortality but are not easily passed on from one person to another. Covid-19 is the opposite: highly contagious but rarely lethal. There is a good reason for this trade-off between infectivity and virulence, but it helps to think like a virus to understand it. On the whole, unless transmitted by insects, dirty water or sex, new diseases evolve towards lower virulence if they spread far.

The 200 or so different rhinoviruses, adenoviruses and coronaviruses that cause what we call ‘the common cold’ have a vested interest in not disabling us much, let alone killing us: they want us to struggle into work, coughing and sneezing, or turn up at parties, kissing and shaking hands. In this way, milder strains spread farther than fiercer ones and gradually displace them. Likewise, bats can ‘carry’ Covid-19 but not die.

By contrast, malaria wants us to lie down in a darkened room, delirious, so as to attract and not notice mosquitoes. Herpes, syphilis and HIV — the worst new animal-acquired infection of recent decades by far, caught from chimpanzees — like to subside for months or years in the hope that we move on to a new sexual partner. Evolution is a cunning foe.

Why are bats responsible for so many recent zoonoses (posh Greek for infections acquired from other animal species)? First, bats are mammals, which means they are sufficiently closely related to us for some of their viruses to thrive in our bodies. A virus that lives in a fish or a bird is less likely to be able to infect a human being, influenza being a rare exception, caught from ducks via pigs. Second, bats have never been domesticated. On the whole we have already caught the diseases of cows and pigs and dogs. Measles, smallpox, anthrax and tuberculosis were all gifts from our farmed animals.

Third, unlike most other mammals, bats live in huge flocks — just as we do. They therefore host viruses that spread by casual contact. Tigers meet so few other tigers and so rarely that they are hopeless hosts for ambitious viruses. Bracken Cave, in Texas, is home to roughly 20 million breeding Mexican free-tailed bats, similar to the (human) population of the Mexico City urban area. In places there are 500 bat pups per square foot on the wall. To a virus that represents a tasty buffet. But why now? That is easy to answer too. It’s not because of climate change or the destruction of forests. Bats have lived in belfries, as well as dead trees, for centuries. It’s because we now live at such high densities and travel so much. With 7.7 billion people on the planet, many of whom now travel long distances, we are a tempting target. As I wrote 20 years ago: ‘The rewards for a germ that colonized us would be immense. It would quickly become one of the most successful microbes in history.’ The chances are that plenty of people died of bat-borne infections in the past too, but the epidemic usually petered out because villages were small and long-distance travel was rare.

However, it seems bats probably did not give us Covid-19 directly. The virus’s sequence of RNA (DNA’s cousin) in human beings is 96 percent the same as that found in a bat sampled in Yunnan in 2013 during the search for the origin of Sars. This implies that they share a common ancestor at least 25 years ago. By contrast, the pangolin version of the virus is 99 percent similar to ours. Probably, captured pangolins, on sale in the live-animal market in Wuhan and mainly imported from Malaysia, had somehow caught the virus from bats. Pangolins are globally endangered because of demand from China.

Fortunately, the modern world not only makes us a tempting target for new diseases, it also gives us new tools to combat them. It took years to sequence the genome of HIV, weeks to sequence the genome of Sars and days for Covid-19. Our ability to diagnose the disease is therefore rapidly catching up, and the chances are that a vaccine will soon be available, while quarantine and strict self-isolation may yet keep the virus from going global. If it does, virulence will probably fall; not much comfort for those who do die, but meaning that the death of billions is unlikely.

In the meantime, please can we learn two obvious lessons? First, let’s stop bringing wild animals into markets alive (if at all): viruses do not survive long in dead bodies, even if not refrigerated. It’s a cruel practice anyway. And second, let’s keep our distance from bats. Definitely don’t eat them.