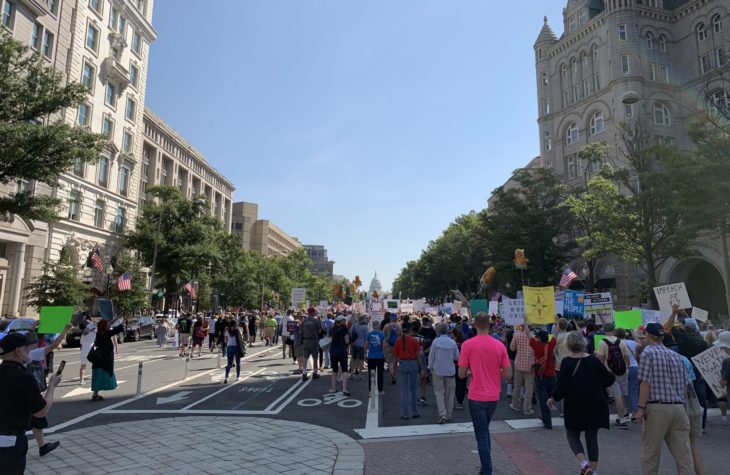 As several hundred climate change activists shut down DC streets and held up morning commutes on Monday morning, a fellow progressive activist, Amy Siskind, was blasting the mainstream media to her 370,000+ Twitter followers: ’50 neo-Nazis go to Portland to encourage violence and the media will cover them endlessly for days,’ claimed the former Wall Street executive. ‘Thousands peacefully protest and march to the Capitol, nothing from the media.’

Siskind wasn’t referring to the climate protest taking place that morning. The Washington Post, New York Times, CNN, ABC, and CBS all covered the activists linking arms and punishing Washington commuters for their climate sins. She was referring, instead, to her own protest that took place Saturday. Siskind, who has garnered notoriety for The Weekly List podcast, where she chronicles President Trump’s misdeeds of the week, organized thousands of protesters on Pennsylvania Avenue for her ‘We the People March,’ which, among many things, called for President Trump’s impeachment.

If you try to find out about this event, though, you’ll only see coverage by Qatari-funded Al Jazeera. According to Siskind, only Fox News asked to report on the march. Where were other outlets when thousands of protesters demanded the president’s impeachment while marching down Pennsylvania Avenue?

From what I observed, the ‘We the People March’ had all the key ingredients for a media spectacle. The cohort of protesters gathered on the sidewalk across from the Trump International Hotel, serving as the symbolic target of their collective ire. With placards in hand, the activists recited some standard refrains like ‘No Trump, No KKK, No fascist USA.’ After police blocked off Pennsylvania Avenue, a woman on a professional sound system mobilized the crowd: ‘We are taking to the streets, everybody. Head on out.’

Soon after, the chanting devolved into conflicting messages. ‘He’s not my type, he’s never been,’ a crowd populated by women repeated, ‘Let’s vote him out and start again.’ Only shortly after, the MC boomed ‘Waiting until 2020 is illegal and immoral’ and kicked off a chant of ‘Trump-Pence must go now.’ The excited crowd took up the new political directive.

Where the chants offered confusion, the speakers provided clarity of vision. Tennis legend Martina Navratilova, who grew up in Communist Czechoslovakia, stood before the protesters and assured, ‘I know a totalitarian regime when I see one. Okay? And this is what we have now.’

Following up, the event organizer, Amy Siskind, urged the protesters to hold elected officials accountable and offered a dire warning: ‘If we think we can wait until November 2020 and wake up the next morning, you are kidding yourselves.’ Rather than wait for an election, ‘We have to take to the streets and act and make the Climate Strike yesterday and We the People March today be the beginning of taking our country back.’

After her speech, the assembled crowd set off for Capitol Hill. Passing by the Trump Hotel, the thousands of protesters, channeling their religious impulse, chanted ‘shame, shame, shame’ at the Old Post Office.

With all this display, where were Washington’s mainstream news outlets? While I haven’t heard back from Siskind for a comment, I can speculate. Perhaps the ‘We the People March’ was a little too ordinary, as far as protests go. Friday’s Climate Strike, which received significant media coverage, was led by Swedish maverick Greta Thunberg. As evidenced by her UN speech, she knows how to drive attention to a cause. Monday’s Climate protest had its own peculiarities, like a man twerking in the middle of an intersection and young adults chaining themselves to a sailboat in the middle of K Street.

As a consolation, the ‘We the People’ call for impeachment is already moving along. On Tuesday, House Speaker Nancy Pelosi announced plans for a ‘formal impeachment inquiry‘ of President Trump. While Ms Siskind is drawing a connection between the march and Pelosi’s announcement, it’s unclear the unreported protest has anything to do with this development.