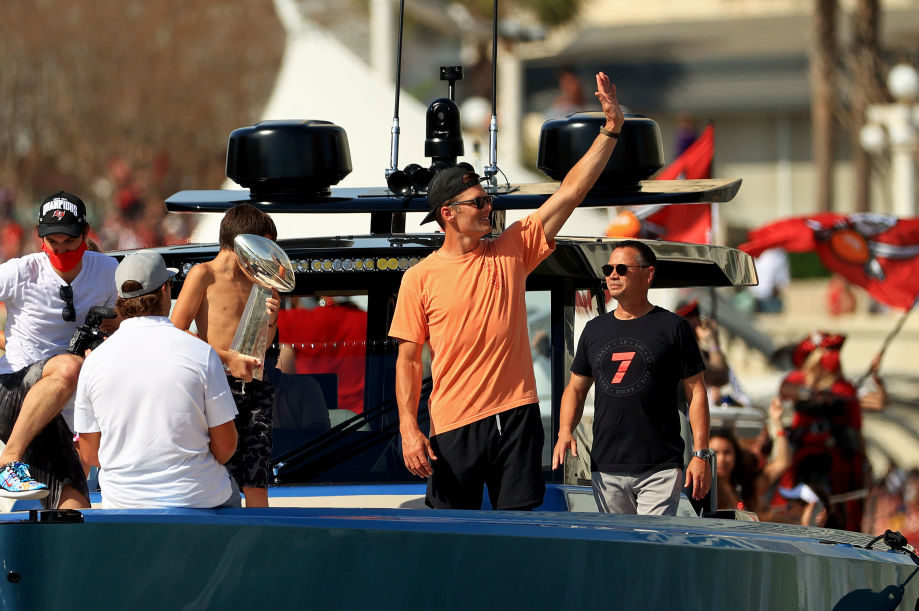 If one state has everything left-liberals hate, it’s Florida. Floridians have no income tax, relaxed shutdown rules and, most egregiously of all, Florida men. I’m not talking about the colorful characters who inspired the ‘Florida man’ meme with their constant crimes and shenanigans. I’m referring to three different Florida men: the GOAT, the Governor and the Donald.

Let’s start with the GOAT, Tom Brady. When the 43-year-old walked into Raymond James Stadium last weekend, he was wearing earbuds, shades and a Tom Ford jacket — but he was missing a mask.

Uh oh. The Super Bowl had not even started and Tom had already sent the Twitter tattletales into a tailspin. Vice President Kamala Harris’s niece Meena kicked off the mask-shaming by tweeting, ‘What’s Tom doing without a damn mask?’ Droves of concerned citizens, including groups Moms Demand Action, pounced on this heinous sin. Little did they know, it was about to get even worse.

After the Tampa Bay Buccaneers crushed the Kansas City Chiefs 31-9, Brady walked onto the field to hug his teammates and find his family. You guessed it: no mask, no face shield, big problem.

A few days later the team had a championship boat parade in Tampa. The scene was gloriously normal, a flashback to our pre-pandemic world. It was a bunch of happy people hanging out. From the look of Brady afterwards, maybe having ‘a little avocado tequila’.

Just like his locker-room entrance and his celebrations on the field, Brady must have known his actions would incense the blue-check marks monitoring the festivities from their apartments in DC. So why didn’t he care?

Perhaps Brady has figured out that his time is better spent trying to make himself happy as opposed to trying to make the COVID scolds less mad. The latter is a fruitless endeavor.

For perhaps the same reason, Gov. Ron DeSantis, when asked if he was concerned about the large crowds celebrating after the game, said, ‘The media is worried about that, obviously. You don’t care as much if it’s a “peaceful protest’, then it’s fine. You don’t care as much if they’re celebrating a Biden election. You only care about it if it’s people you don’t like. I’m a Bucs fan. I’m damn proud of what they did.’

Like Donald J. Trump, DeSantis and Brady are both used to being hated, loved, blamed and praised. But these Florida men know something vital that every American should learn: you do not need left-wing media approval to succeed.

Brady didn’t need the columnists at USA Today to forgive him in 2015 when the news broke that he had a MAGA hat in his locker. As the press reeled in horror and pushed out think pieces on the problematic Patriot, Brady just kept adding rings to his collection. DeSantis didn’t need CNN’s Chris Cuomo to gush over him on prime time in order to keep Florida’s schools open and its economy alive. Donald Trump didn’t need a fawning  press corps to win over half the country.

There is a reason some people are making the game-time decisions in the arena and others are critiquing them from their basements. While fun-sucking ‘journalists’ were tweeting about how ‘Florida is going to kill us all’, Tom Brady was winning his seventh Super Bowl, Ron DeSantis was enjoying an ice-cold beer and Donald Trump was watching it all from his $160 million beachside resort.