Trump told me I got a ‘bad rap’ 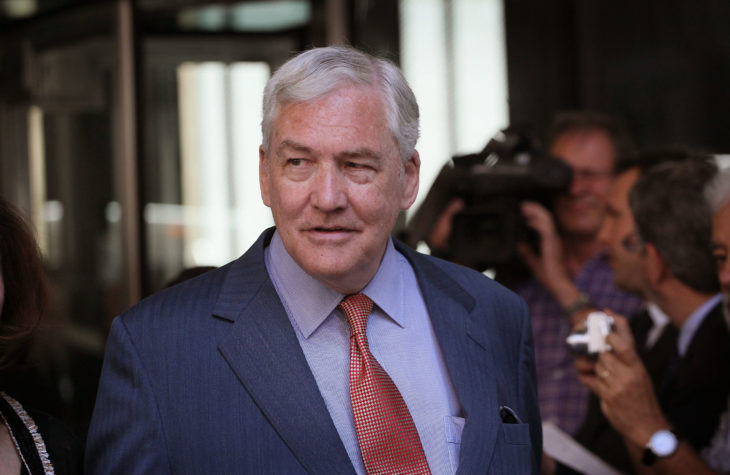 CHICAGO – JULY 23: Conrad Black leaves the Dirksen Federal Building following a hearing detailing the terms of his bail July 23, 2010 in Chicago, Illinois. Black was released from a prison in Florida on Wednesday after posting a $2 million bond while he appeals the 6 1/2 year sentence he received for a conviction of crimes related to theft and fraud he committed while serving as chairman of Hollinger International. (Photo by Scott Olson/Getty Images)

Trump told me I got a ‘bad rap’

I owe my return to these pages to the pardon I have received from the President of the United States. When he called me, he referred to my ‘miraculously shrinking crime’ of 17 counts, to 13 (including racketeering), to four, to two; and to the quantum of my alleged transgressions from $400 million to $60 million, to $6 million, to $285,000 (which was approved by independent directors and published in the company’s filings). The president stressed that the White House counsel and his legal staff had analyzed the legal material and concurred that I received ‘a bad rap (and) an unjust verdict’. The companies we spent 30 years building descended into bankruptcy under our court-sanctioned successors while they trousered $350 million, and $2 billion of shareholders’ equity was vaporized; a singular triumph of the corporate governance movement.

Many in this country have asked me what I’m doing in response to Tom Bower’s scurrilous book about my wife and me. Counsel were confident, but as Canadian rules only pay 55 percent of successful libel plaintiffs’ costs (and as I had largely rebuilt my socioeconomic status) damages would be much less than 45 percent of my legal costs. I did collect the greatest libel settlement in Canadian history — $5 million — from my original accusers. Anyone who wants the facts can get them in my book A Matter of Principle, though Bower’s claim that I rested my head on the defense table when the verdicts were read was amusing. I’ve rested my case on the highest American legal authorities’ decisions: the Supreme Court and the President on advice of counsel, and it is over. The case against me was bunk and it is closed.

It is distressing to return to England in the midst of the greatest failure of her government since the American Revolution. David Cameron promised ‘full-on treaty change’ and came back from Brussels with less than Mr Chamberlain brought back from Munich. The voters would certainly then have approved Mrs May’s deal, but David Cameron was apparently convinced that anything would beat Brexit in the referendum. Mrs May has tried hard but with poor tactics. The time for Boris has come. He is in some ways a scoundrel and a charlatan, of course, but so have many great leaders been, including Disraeli and Lloyd George (and to a point, Walpole). The new Project Fear is another fraud. The collapsed lung of the EU is that Brussels answers neither to the principal member states nor to its parliament, and thus has little democratic authenticity. Bismarck’s greater Germany will arise voluntarily among its Alpine and Baltic neighbors; the fiscally weaker EU countries are useful to Germany to soften the euro and facilitate German exports.

Angela Merkel could have been Bismarck in drag without the militarism, and she has surrendered to the Greens and made Germany an energy-vassal of Russia while expecting the US to pay for its defense. The world is still waiting for a united Germany to play its part responsibly as the greatest power in Europe, for the first time since the adolescent-minded William II fired Bismarck in 1890. It brings to mind Mr Churchill’s comment in 1944 that he did not wish ‘to be chained to a dead German’. France is led by a flake. Britain can have a fast track into free trade with North America, a better market with sharply higher economic growth and no demands on sovereignty.

The failure of almost anyone in Britain except Nigel Farage (the ablest party leader in the UK since Margaret Thatcher) to judge American political events accurately reminds me of how complacently unaware British and Europeans are of that country’s inner direction. Friends such as David Frost and Andrew Neil have known New York and Washington and Los Angeles politically, and Europeans have been addicted all my life to stereotyping Americans as ignorant but diligent bourgeois surmounted by a clever ruling elite, with nasty ethnic-minority problems festering in the undergrowth. I owned daily newspapers in 30 states and gained some insight into their complicated system. Trump has produced full employment, lowered taxes and doubled economic growth, and is shutting down illegal immigration and Chinese trade-cheating. He is reviving nuclear non-proliferation and ended the oscillation between George W. Bush’s random interventionism and Barack Obama’s feckless Panglossian pacifism. The denigration of him abroad, especially by such nauseating mountebanks as Jeremy Corbyn, Sadiq Khan and John Bercow, along with the human wave of Democratic kooks and retreads running against him, is a badge of honor.