The need to concede

Contesting the fundamentals of democracy takes all Americans down a dark, perilous spiral 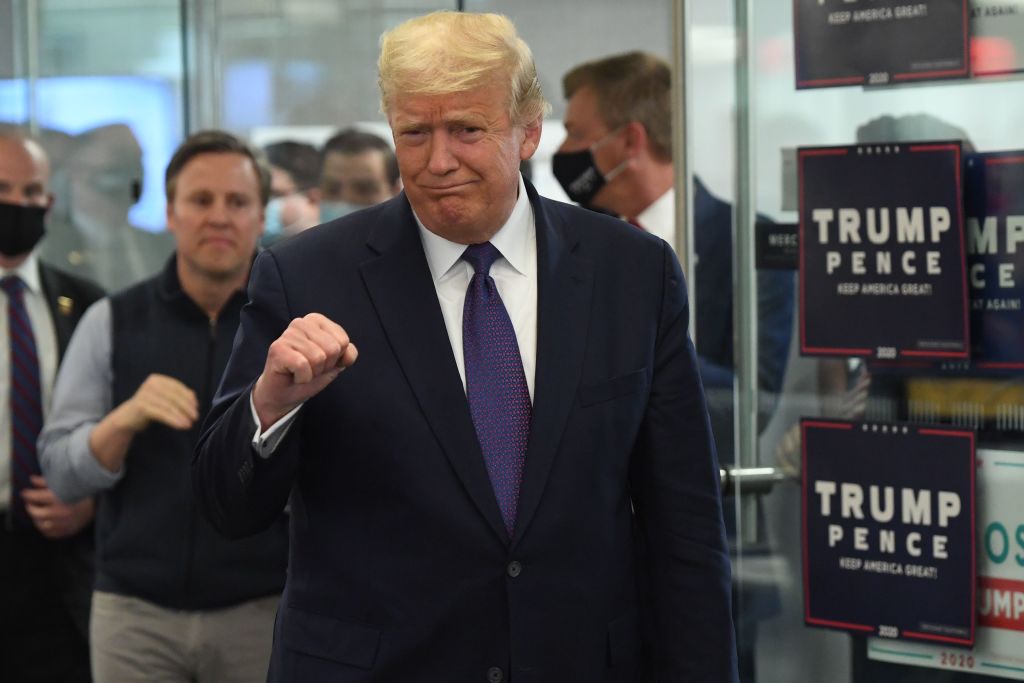 Donald Trump at his campaign headquarters in Arlington, Virginia (Getty)

The need to concede

The political and emotional climax of US presidential elections comes when the losing candidate, accompanied by a teary spouse, tersely but gamely concedes defeat and wishes the victor well. With anxiety, I worry what might happen if this little-noted but critical ritual fails to take place in 2020.

No law requires a concession speech, no agreement demands it; but this informal ceremony has an essential role in confirming the paramount rule of democracy, that the losing candidates has heard and accepted the voters’ verdict. After a hard-fought, even vicious, campaign, the vanquished assures the victor he accepts the results, permitting the country to move forward. Sure, political wrangling will immediately resume, but once the key step of accepting the voters’ will has been established, the country is whole, the body politic healthy and the next round can begin.

The alternative has dire consequences, as Víctor Hernández-Huerta of the Centro de Investigación y Docencia Económicas in Mexico City shows. His study of 178 presidential elections in democracies in the period 1974-2012 found that in 38 of them, or 21 percent, when the runner-up candidates or their parties disputed the results, this ‘set off violent unrest, constitutional crises and even civil wars’. Hernández pointedly notes that the United States is ‘not immune’ to this danger.

So far, of course, the country has been blissfully free of such contention. Disputed presidential elections there have been aplenty: think 1800, 1824, 1876, 1960 and 2000. But, until now, losing candidates accepted their loss with grace and went on to make that all-important concession speech. They implicitly realized that some things — notably legitimacy and stability — matter even more important than winning.

In the most recent of those contested elections, in 2000, Al Gore conceded with magnanimity, eloquence and vision: ‘I say to President-elect Bush that what remains a partisan rancor must now be put aside and may God bless his stewardship of this country.’ To be sure, partisan rancor immediately resumed but it hardly mattered once Gore personally and publicly had legitimated the outcome.

That’s not to say that the runners-up roll over and went passive, nor that they should. The election in 2000 was followed by 36 days of intense legal wrangling, starring the notorious Palm Beach ‘hanging chads’. In this spirit, President Trump is absolutely entitled to pursue every legal avenue — including recounts and lawsuits — to assure his full rights.

But claiming that the Biden campaign engaged in ‘fraud’ and that the election was ‘stolen’ is wildly inappropriate unless and until there is a factual basis for these conclusions. Indulging in this sort of rhetoric has ominous implications, turning the election results into a political, as opposed to a legal, contest.

Assuming the Electoral College on December 14 validates Biden’s victory, the shame of it is that everyone knows Trump, for all his bluster, inevitably and quietly will stand by on January 20 as Joe Biden is sworn in. Judges, senators, representatives, cabinet secretaries, aides, generals and governors will make sure the Secret Service does not hold down the White House as a bunker. In the end, his incautious claims will do Trump no good but will only further sunder an already fractured country.

I opposed Trump’s candidacy from the moment he announced in June 2015, mainly fearing his malign character and the damage it would do to the country. In this spirit, I abandoned the Republican party and voted for Gary Johnson. Then, the Trump presidency assuaged my fears. His character continued to repel, his tweets irritated and some policies were wrongheaded (hello, Kim Jong-un), but as president, Trump generally pursued a mainstream conservative agenda and – most importantly – his personality generated no crises. Accordingly, I endorsed Trump’s reelection bid.

But now, as he faces the prospect of losing, that malign, egoistical character has come to the fore and threatens to damage the fabric of American politics. The country’s supreme need, should Biden’s victory be confirmed, is for Donald Trump to respect the outcome of the election results, dutifully make his concession speech and assure Americans he will leave office when his term concludes.

This is the moment for Trump supporters to insist that he take those steps. However much they adore him and despise Biden, contesting the fundamentals of democracy takes all Americans down a dark, perilous spiral.