The viruses-don’t-respect-borders slogan is dead wrong 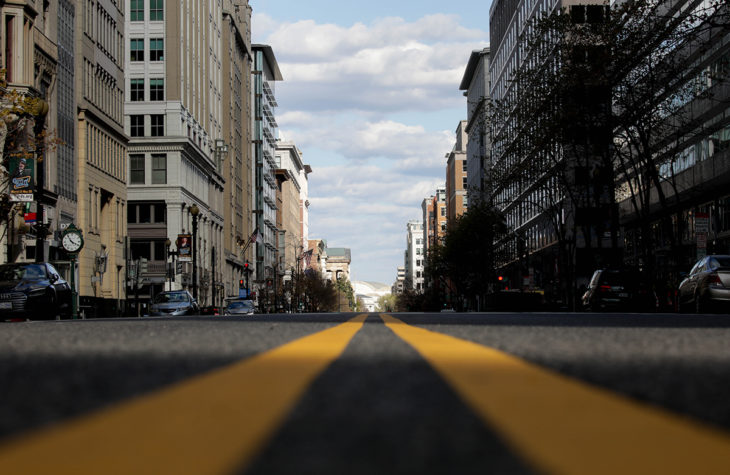 The new reality: a deserted downtown in DC

At the end of March, about two weeks into the coronavirus emergency, I looked out my window onto the street below and saw something that made me uneasy about the future of the country. There was a commotion down there. Two white teenagers were standing in the street with their hands up. A man — who looked and sounded like an East African immigrant — had stopped his car in the middle of the road and sprung out. I squinted to see what it was he was holding in front of him that made the kids look so alarmed.

It was a pizza. The kids had ordered it. The car was marked with a Domino’s insignia. ‘Whoa, whoa, man!’ said one of the kids. ‘Take it easy!’ He was grotesquely corpulent. Hanging folds of pink belly were swinging wildly out of his clinging T-shirt.

The driver walked the pizza to the back of his car and laid it on the trunk, along with a paper bag. Now it was obvious what was going on. He had suggested to the boys that they take possession of the pizza in such a way that they not make contact with him. That was the safest thing, given the epidemic — for him, for them and for all the customers he would have to serve during the rest of the day. Smart thinking. I thought, not for the first time that day, of the heroism of delivery drivers like this, who make it possible for people like these kids to stay home and ride out the storm in their rich neighborhoods.

That was not Fatty’s view. He just found the whole routine weird. He jostled past the driver and reached into the paper bag, and now, suddenly, he was angry. ‘Where’s the lava cake?’ he asked. ‘I ordered a lava cake!’ The driver mumbled. ‘Drive back to Tenleytown and get it, can ya?’ the kid threatened. ‘Can you make that a priority? Can you get me an extra one, too?’ The driver mumbled a little more and, looking scared, drove off.

Anyone who has read Defoe, Manzoni or Camus, or who can put two and two together, ought to realize that, wherever plague is, looting, strikes, war, hunger and other unrest are not far away. That evening on my street, you could have been forgiven for thinking there was less to fear from coronavirus than from standing between a fat American and a steaming box of pizza. But a situation where idlers try to boss around hardworking people risking their lives is not likely to hold for long. And where will that leave us?

Donald Trump’s understanding of epidemiology in general, and of this crisis in particular, appeared quite shallow right up until his announcement of emergency measures on March 11. His reference to coronavirus as a ‘Chinese virus’ was crude, it is true, though by then certain Americans were already referring to it by the even less decorous name of ‘Kung Flu’.

Still, Trump’s instincts have left him better armed than any president in living memory to confront an epidemic. Protecting borders is the thing Trump cares about most. It is also the most time-tested and effective way of fighting epidemics. Trump’s decision to limit the inflow of foreigners from China in January, as soon as news emerged from Wuhan, turns out to have been the earliest constructive step any leader took in stemming the virus. It bought time. In January, one would have expected the virus to hit the US before it hit Europe.

There are moments when it is wiser and safer to keep people apart — that is just common sense. But as Trump’s foes have sought to politicize the epidemic, common sense is what they have declared war on. Joe Biden accused Trump of xenophobia for mentioning China.

A Georgetown University public health expert confidently tweeted that ‘germs don’t respect borders’. If this is true, it is true only in the sense that respecting borders is a human trait. Viruses don’t write novels or read Playboy or develop gambling addictions or say ‘for all intents and purposes’ until it gets on your nerves, either.

This viruses-don’t-respect-borders business is a perfect globalist slogan. It conveys absolutely nothing but aggressively enough so as to cow others into swallowing any inclination to stand up and disagree with you. It is what is called in zoology ‘display’.

But in fact, the scientist is wrong. This virus happens to travel on people. If people can be made to respect borders, viruses will ‘respect’ them too, in the sense that they will not cross them. If this is true of households, then it is true of nations.

There is an iron reality at work here that is very frustrating to the president’s detractors. At a time like this, action must be coordinated; coordinating action requires leadership, and in a presidential system, one is stuck with the leader one has. The press has long treated Trump as worse than the plague, and that view has not changed now that there is an actual plague to compare him to.

Trump was faulted in the early days of the outbreak for his ‘refusal’ to use the Defense Production Act of 1950 more aggressively, in order to get more ventilators for New York City. But what is the DPA? It’s a McCarthy-era tool devised during the Korean War (a war even less popular than the one in Iraq), in order to put American corporations under direct presidential control. They want Trump to have that? It is a measure of the media’s antipathy to Trump that as long as he refused it, they assumed it must be what the situation called for.