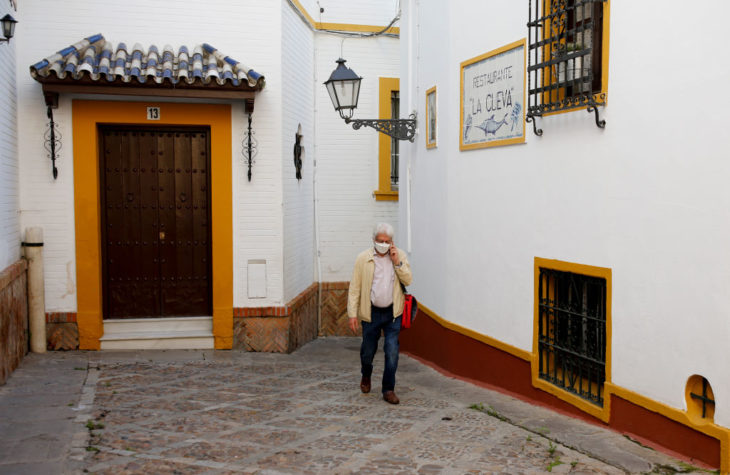 Once upon a time, when travel was still allowed, I checked into a small hotel in back-of-beyond Extremadura, in south-west Spain. The receptionist asked for my passport, I searched my pockets in vain, went to look in the car and then remembered that I’d left it on the table at home.

‘Well, your national identity card then.’

‘We British,’ I replied ‘don’t have identity cards.’

She stared at me. ‘If you don’t have identity cards…how do you know who you are?’

Leaving the house just got a lot more complicated in Spain. As of Saturday there are a whole raft of new rules to obey. After 48 days of strict confinement — proper lockdown — millions of adult Spaniards (and me) are finally allowed out for a walk, fresh air and exercise. With a patio and garden to enjoy, I can’t pretend that my own version of ‘house arrest’ was as onerous as for the two-thirds of Spaniards who live in flats and for whom, during the preceding seven weeks, fresh air and exercise have been limited to putting their head out of a window and breathing deeply. But I was still anxious to take advantage of my new freedom.

But it wasn’t that easy. Before I could leave the house, I had to learn the new rules. And first I had to find the new rules. Pressed two days before the big day to specify the new conditions and restrictions, health minister Salvador Illa declined to do so, declaring instead that they would be published ‘shortly’. In the absence of hard information, bewilderingly complicated rumors began to circulate about time slots, different times for even- and odd-numbered houses, age restrictions, the rules for villages with fewer than 5,000 inhabitants, face masks, the number of excursions permitted per day, safety distances and penalties for infractions.

When the rules were, finally, detailed just hours before Liberation Day, they turned out to be every bit as complicated as feared, contemplating a formidable range of possibilities and occupying five dense, user-unfriendly pages in the Boletín Oficial del Estado (Spain’s Official State Gazette). Television channels immediately held intensive Q&A sessions. And almost immediately a joke appeared on social media showing a teenager in the future taking a university entrance History exam and being asked: ‘With reference to the 2020 C-19 health crisis, detail the conditions under which adults were first allowed to leave their homes.’

But the sun was warm and welcoming and after weeks of confinement nobody felt inclined to do any last minute swatting up of the rule book. Freedom in Spain often means the freedom to disregard silly rules, so people were guided instead by the common sense and goodwill that make life in provincial Spain so agreeable. In the center of town I spoke to a friendly policeman and asked him if he had imposed many fines. ‘No,’ he said, ‘to tell you the truth, I can’t really because I don’t actually know myself what all the rules are. But everything seems OK to me.’

That was much what the receptionist in the hotel in Extremadura said when it became clear that I had neither passport nor identity card: ‘Well, it doesn’t really matter — you look OK to me.’