Where did ‘taking a knee’ come from?

The football tactic is also known as the genuflect offense 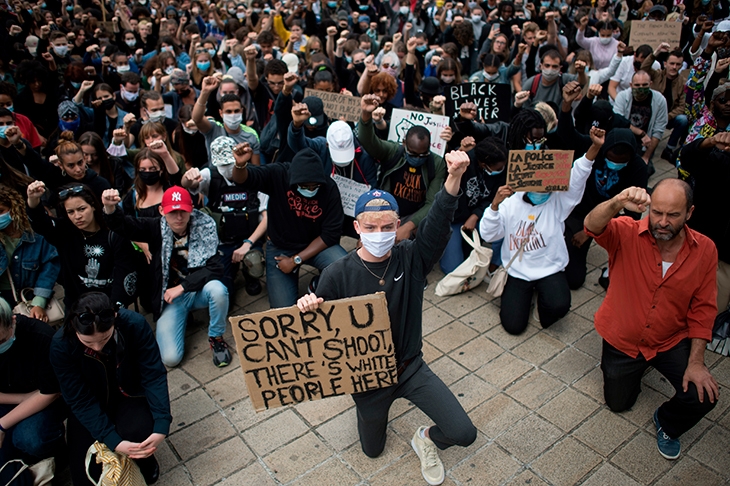 Where did ‘taking a knee’ come from?

That sympathetic physician, Sir Thomas Browne, thought himself austere in conversation. ‘Yet, at my devotion,’ he confessed in Religio Medici (from the 1630s), ‘I love to use the civility of my knee, my hat, and hand, with all those outward and sensible motions which may express or promote my invisible devotion.’

His hat he took off in church. His hand? Did he make the sign of the cross with it? His knee he probably bent to kneel in prayer, certainly at the reception of the Sacrament, as the Prayer Book directed.

Today, there are two things odd about take the knee: the phrase itself and the gesture it describes. Neither was familiar in Britain.

The phrase finds a history in American football, which I don’t play. An NFL rule declares: ‘An official shall declare the ball dead…when a quarterback immediately drops to his knee.’ This wastes time. It all took off in 1978. But if a player is injured, to take a (or the) knee is reckoned to show concern.

In 2016 Colin Kaepernick, a quarterback, began taking a knee during the National Anthem in protest at racism. It caused a stir. But it was less of a sledgehammer gesture than the black power salute of the clenched fist, which drew attention at the Mexico Olympic Games of 1968.

The football tactic is also known as the genuflect offense. Yet Origen, the early Church father, thought genuflection absolutely necessary when asking God’s pardon for an offense. The gesture was so linked with penitence that in 325 the Council of Nicea forbade kneeling on Sunday, which was no day of penance but of rejoicing. On Good Friday, the leading fast day, people would creep the Cross, as Langland mentioned in the 14th century, by advancing to adore it on their knees.

The English knee, the Latin genu (hence genuflect) and Greek gonu all derive from an archaic word gneuo. But the gnu (called wildebeest by the Dutch) takes its name not from its knobbly knees but from the language of the San, whom we used to call Bushmen. It doesn’t take long to learn to say San instead, or to say take the knee and do it.