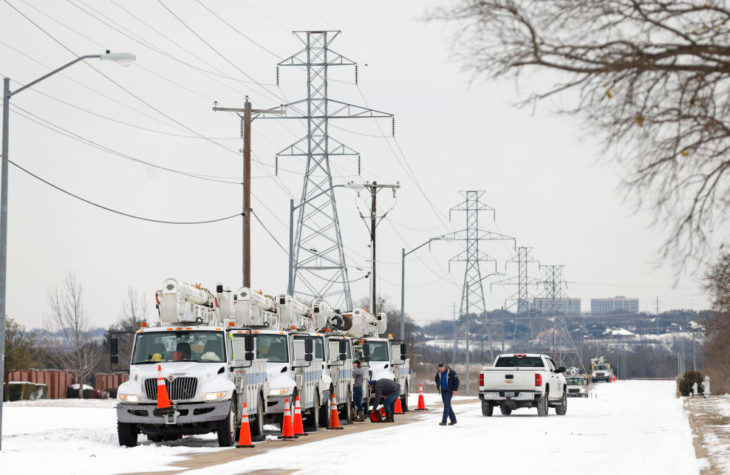 Electric service trucks line up in Fort Worth, Texas (Getty) 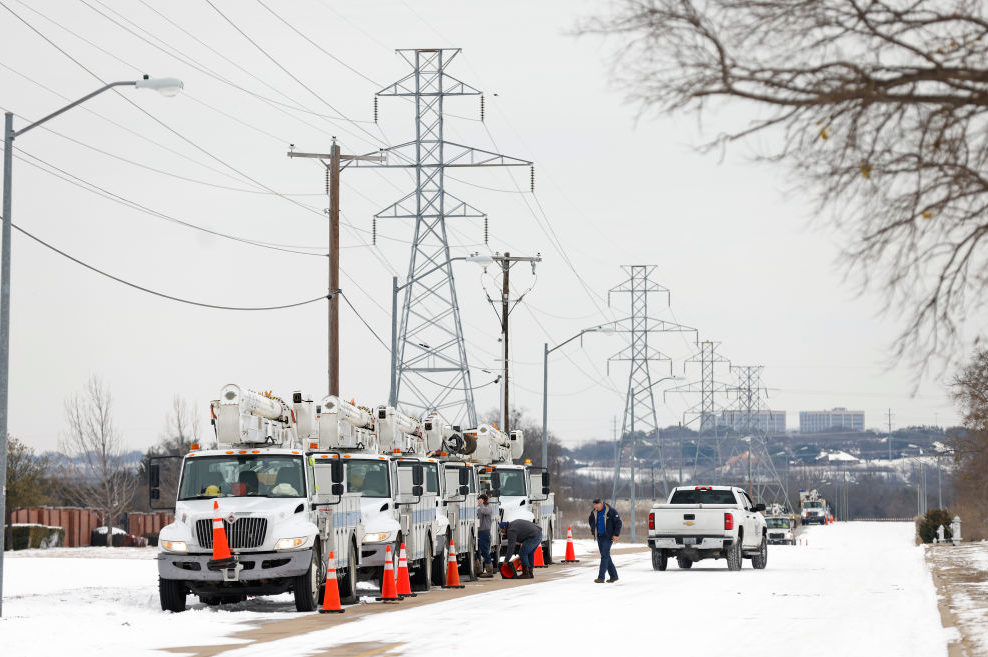 The joy of life in America, in the 21st century, consists partly in the knowledge that whenever something bad happens, it’s ipso facto someone else’s fault. So let’s go get the so-and-so!

Welcome to frozen-over Texas, where on Wednesday morning, February 17, 2.7 million households were without heat, owing to the uninvited and unwelcome presence of an Arctic cold front spreading suffering and inconvenience through every one of this energy-rich state’s 254 counties. The last time it got anything like this cold around here was 1949.

I was here in ’49, albeit too young to appreciate the icicles. I can say notwithstanding that life around Texas this wintry go-round has been sufficiently unpleasant and uncertain that I’m not going to complain about the complainers who had been brutally surprised to find themselves powerless — literally.

At least (I say with due empathy for the surprised and uncertain), my and my wife’s power — supplied by Oncor in Dallas — has worked without complaint or resistance. Our neighborhood had not been selected for blackouts intended by the power regulators to keep the power grid as balanced as possible, and as active.

The fate of family members in Austin has been otherwise. At 5:30 on the very morning I write these lines, their power expired, as did that of every other household on their side of Mountain Laurel Drive. At least by then, temperatures had risen into the 30s, vs the single digits. I shivered, even so, as our family texted us the bad news and we texted back all we had to offer: a list headed by, you could say, warm wishes. It has not been easy this week living in a state most Texans supposed had energy to burn.

Well, it does: just not enough for this precise moment; or in such form as necessary for ready distribution to customers. You know what is coming next: castigation, followed by retribution. I began his essay by saying everything bad that happens these days is someone else’s fault. That means villains are to be singled out and hunted down — whether or not the upshot of the hunt is the development of policies that appreciably lessen the chances of a future freeze-out resembling the one we’re trying to melt our way out of right now.

The COVID damndemic that made us a year ago — one entire year ago! — prisoners of an unseen, unseeable virus hasn’t improved anyone’s disposition. Certainly not my own. Where normal life — in the form of parties, church services, basketball games and a moderate February — isn’t to be had, and where the spectacle of a drumhead court martial meant to remove an already removed — president riles up believers on both sides of the political line…where all this goes on, I say, we know better than to expect patriotic indifference to freezing in your own dark bedroom.

The debate already in train over energy and climate policy is going to be a mean one. Already MSNBC’s Joe Scarborough (who used to display a sense of humor) has accused Texas governor Greg Abbott, a Republican, of ‘lying through his teeth when he’s blaming [energy] renewables for the grid going down’. Funny, in that the Wall Street Journal editorial page led off the same day by jumping on Abbott for blaming the crisis on private power companies — which are regulated by government.

The question for debate is shaping up in a form something like this: does the US energy market suffer from too much regulation — or from too little? If the latter — a likelier ‘truth’ for this pro-regulation moment — how much more control can and should Congress pile on energy’s private sector?

Underlying this tactical question is, of course, the strategic question of what we should be doing about climate change — already the most-begged question in politics. We don’t talk about whether climate change exists, and is causing this or that. Through the agency of the mass media we learn daily that, yes, of course it’s real, and, yes, of course, it has to be stopped. Accordingly, the topic of the Big Chill in Texas and elsewhere must be addressed so as to affirm the need for the quick phase-out of fossil fuels. Which 1) mess up the climate and 2) fail to keep us warm. Quod erat demonstrandum — right?

Only if you look at energy policy through the distortions of energy politics, Washington DC-style. Let’s try something else. There’s too little energy available to keep America safe from the ravages of winter and summer alike.

The solution: more energy. More oil and gas wells, on private and federal lands alike. More and bigger nuclear plants. The restoration to favor of coal as a fuel, when cleaned and scrubbed to the max. Yes, and wherever practical, without thumb-on-the-scale government subsidies, more renewables: such as wind, which presently supplies 23 percent of Texas’s energy needs.

When you need more of something, you go out and get it, don’t you — money, food, energy? Used to be a rule of thumb, back before Americans, in moments of outrage, took to slamming doors and kicking cats. Common sense of the generous old kind could go a long way in the direction of thawing all of us out.

William Murchison is a Dallas-based journalist and the co-author of Those Gasoline Lines and How They Got There.