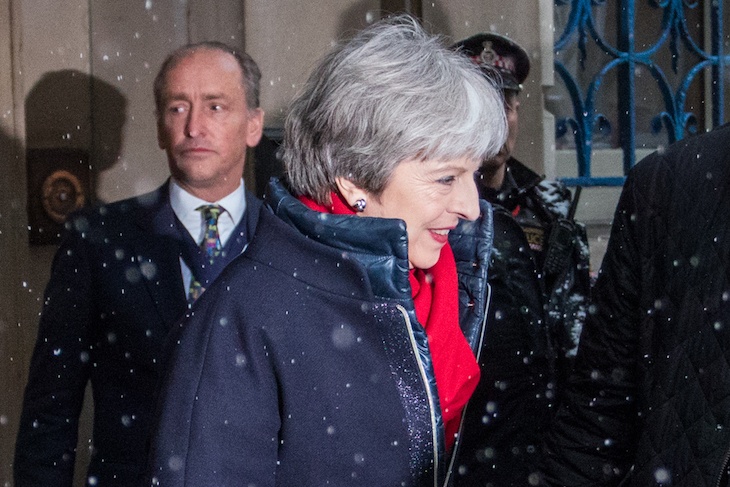 LONDON, ENGLAND – MARCH 02: British Prime Minister Theresa May leaves after giving a speech on Brexit at Mansion House on March 2, 2018 in London, England. Theresa May sets out five tests for the future deal between the UK and the EU. She believes a broad and deep free trade agreement will be achievable and the EU Referendum was a vote to “take control of our borders, laws and money” … “not a vote for a distant relationship with our neighbours”. (Photo by Eleanor Riley/Getty Images)

Last Monday, Theresa May’s chief of staff talked junior ministers through her Mansion House speech. Gavin Barwell was frank with them. The decision to stay in various EU agencies — and the commitment that UK regulatory standards for goods would remain ‘substantially similar’ to Europe’s — would make it harder to negotiate big trade deals with other countries. But he argued that the trade-off in access to the EU market made it worthwhile. In keeping with the current Tory truce over Brexit, no one in the room dissented.

No. 10 believes that maintaining this peace is not just desirable, but essential. Barwell ended the meeting by emphasising that the lesson of Maastricht and Jeremy Corbyn’s behaviour over the customs union was that Labour would always take the opportunity to bring down a Conservative government. So the Brexit deal needed to be one that every Tory, from Anna Soubry to Jacob Rees-Mogg, could support.

Mrs May’s speech succeeded because no single Tory faction got everything it wanted but most got what they needed. For the Brexiteers, there’s the fact that the UK is legally leaving the single market and the customs union and that free movement will end. The vast majority of former Remainers, meanwhile, are reassured by the government’s effort to stay in various EU agencies and to replicate parts of the single market. On goods, the deal the UK is seeking bears significant similarities to Switzerland’s relationship with the EU. Observing the current Tory mood, one of the Prime Minister’s cabinet allies confidently declared: ‘She’ll be fine as long as she doesn’t do what David Cameron did, and give in.’

Unfortunately, the European Union is about to take a wrecking ball to this carefully constructed compromise. The EU doesn’t much like its deal with Switzerland and is currently trying to pressure the Swiss into accepting changes. The idea of handing that kind of arrangement to the UK — and without free movement — won’t appeal.

The UK has at least held some things back for the negotiations. I understand that one paper circulated to senior cabinet ministers in recent weeks suggested that if the EU doesn’t bite on May’s proposals, Britain could offer concessions on immigration in an attempt to make them more palatable.

The current indications, however, are that the EU will stick to its position that the UK’s choice is between staying in the single market or a free trade deal like Canada’s. One reason why the EU will continue with this approach is that it doesn’t want an alternative economic model on its doorstep. If it can push the UK into agreeing to follow all the rules of the single market, so much the better.

The big question in British politics now is how May responds when the EU rebuffs her offer. She has always resisted the idea of choosing between the Norwegian and Canadian models. But if Brussels forces her to, which path will she go down? Her red lines would suggest Canada but she will come under immense institutional pressure to accept something akin to Norway.

Many in government fear that there are those in Brussels who want to cut the UK down to what they see as a more appropriate size. These forces have been encouraged by the lack of urgency in the UK government’s preparations for a ‘no deal’ scenario. The fact that Britain can’t credibly threaten to walk away makes it all too tempting for hardliners on the EU side to punish the UK.

You could see this approach in the EU’s draft legal text for the withdrawal agreement. Its language about Northern Ireland was deliberately provocative. One No. 10 source remarks: ‘We know where that came from. There are those in the Commission who want to ramp up the pressure on us.’ But the danger is that the hardliners miscalculate: they push for something that the UK really can’t accept and the talks collapse as a result.

The chances of ‘no deal’ are higher than generally realised. The two sides remain substantially apart on the Irish question. On Monday, Mrs May suggested the US/Canada border could act as a model. But the Irish have already ruled out this kind of border and it clashes with the UK’s commitment to avoid ‘any physical infrastructure at the border’. The Irish Foreign Minister Simon Coveney’s dismissal of the idea of exempting small-, micro- and medium-sized businesses from customs checks suggested that the Irish government and the Commission’s real aim is to keep the UK in the customs union and highly aligned with the single market. But it is hard to see how May could present such an arrangement as being compatible with the referendum result.

There is also a risk that even if a withdrawal agreement can be reached, the trade talks could collapse if the EU tries to insist on tying the UK into a lopsided agreement. In her speech, May warned that the UK ‘will not accept the rights of Canada and the obligations of Norway’.

There is, perhaps, a problem that one of the few beneficiaries of a no deal scenario would be the Commission. It would receive 80 per cent of the tariff revenue if the UK was left trading with the EU under World Trade Organisation rules. This would make a significant contribution to filling the hole left in its budget by Brexit.

But those in the EU who would like to push the United Kingdom over the cliff should reflect on what that would mean. Yes, it would deter other countries from leaving but it would also fundamentally change Britain’s relationship with Europe. Either Britain would find an alternative economic model that would be almost the opposite of the European one, or this country would become poorer. In those circumstances, would Britain really carry on meeting Nato’s 2 per cent of GDP target for defence spending? The sterling devaluation of 1967 was rapidly followed by the retreat from east of Suez. This time, economic difficulty could be followed by a retreat from east of Lowestoft.

Brexit was Britain’s decision. The EU is right that the onus is on this country to come up with proposals for how a balanced, future partnership could work; and the government has taken too long to do that. But if the EU chooses to make this split as difficult as possible, then it should expect Britain’s view of its broader, European responsibilities to change too.