Is Trump more left-wing than Biden?

The President has a surprising capacity for progressive-sounding political analysis 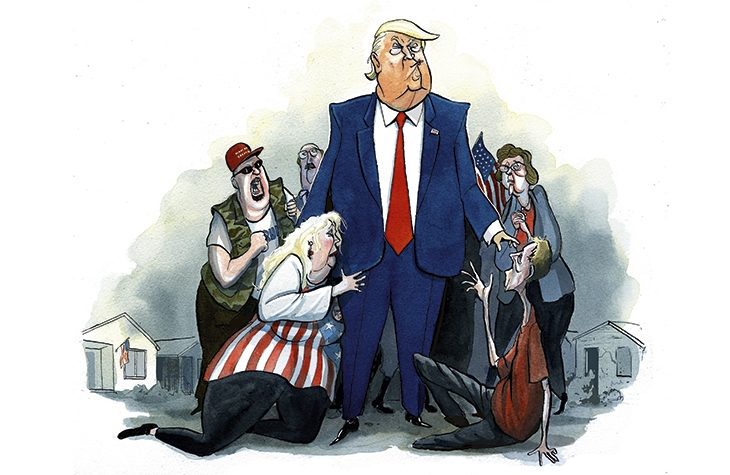 Is Trump more left-wing than Biden?

Just when it seemed that Donald Trump had finally committed political suicide — his notion of injecting disinfectant to cure coronavirus marking only one of his recent reckless absurdities — he says something off the cuff that makes one lament the sight of so much raw political talent going to waste in the cause of solipsistic mania.

A leftist anti-Trumper I may be, but I’ve been strangely impressed by the President’s capacity for perfectly credible, progressive-sounding political analysis, especially on the trade issues that sometimes bring together on common ground right-wing nationalists and left-wing defenders of labor rights. That an estimated eight million Obama voters chose Trump in 2016, and more than 200,000 Bernie Sanders supporters voted for him in the three crucial Midwestern states of Wisconsin, Michigan and Pennsylvania, testifies to his appeal among a portion of the disaffected working class who cannot simply be written off as racist, right-wing or lunatic.

Trump’s latest insights (I use the term ‘insights’ guardedly), mostly unreported in the major media, came in a remarkable hour-long interview with Maria Bartiromo of Fox News. As with all Trump’s self-aggrandizing rambles on TV, it takes a long time for him to get to the point, if he does ever get there. About 10 minutes into the interview, the conversation turned to US trade policy, which Trump and Sanders, as well as the pre-White House and anti-Hillary Obama, agree cost the country millions of factory jobs that moved to Mexico and China. Now, in the age of COVID-19, mass unemployment and emergency medical equipment shortages, the issue of free trade and where goods are made has taken on new urgency.

Trump bit into the subject with characteristic opacity. ‘We used to make our own product,’ he said. ‘We don’t need 37 pencils — we can buy two pencils, and they can be better.’ Why, I wondered, use pencils as an example rather than masks, ventilators or testing kits? But in the next exchange — why did all this happen; why did the United States give away large sectors of its manufacturing base and industrial culture? — his reasoning became clear. ‘Business wanted cheap labor, but they also wanted lax environmental rules,’ said Bartiromo. Trump replied: ‘But see, the cheap labor turned out to be very expensive…because when you add what [this is] costing…with our drugs, our pharmaceutical products, so many different things.’

As Trump put it, when the pandemic hit, ‘nobody knew what a ventilator was; we’re now making thousands of ventilators a week…and also selling them to other countries that desperately need them’.

These opinions straightforwardly state what is now indisputable — that outsourcing so much production to China and other low-wage countries has come back to haunt us in a time of crisis and insufficiency. If one country utterly dominates the making of a product, it can charge whatever it wants when demand goes up, or fail to deliver a product altogether if manufacturing shuts down, as happened in Wuhan. Moreover, trying to create domestic production from scratch, in a hurry, takes longer and costs more than ramping up production of something that’s already being made.

But that’s not what parishioners in the church of free trade want to hear, nor what the barons of the Democratic party have been preaching — to the delight of orthodox economists and Wall Street alike — ever since Bill Clinton devoted himself to that gospel.

Trump’s attacks on America’s reliance on global supply chains are well received by the left. The leading American critic of supply-chain rigidity and monopoly, Barry Lynn of the Open Markets Institute, is no right-wing friend of the Trump administration. An admirer of the antitrust philosophy of the early 20th-century progressive jurist Louis Brandeis, Lynn pointed out years ago that Taiwan’s dominance in the fabrication of motherboards and semiconductors was a danger to the US computer business. Lynn’s awakening came with the 1999 earthquake that shut down Taiwanese factories, which in turn shut down computer factories in Texas and California that could no longer get essential parts. Lynn is more articulate than Trump: ‘We had put all our eggs in one basket, and that basket was really far away from us.’ Sound familiar in view of the current pandemic?

Trump’s idea of a great legal mind is Roy Cohn, the venomous aide to Sen. Joseph McCarthy, so it’s unlikely that he thinks well of progressive political ideas in general, and yet he has expressed sympathy for the leftist view that establishment Democrats ganged up against Sanders to stop him from becoming the party’s candidate. On the day Bernie suspended his presidential campaign, Trump tweeted: ‘Bernie Sanders is OUT! Thank you to Elizabeth Warren. If not for her, Bernie would have won almost every state on Super Tuesday! This ended just like the Democrats & the DNC wanted, same as the Crooked Hillary fiasco. The Bernie people should come to the Republican Party, TRADE!’

It is tempting to ask: is Trump a secret fellow traveler? Does he really sympathize with the man he calls ‘crazy Bernie’? If he had been raised by a warmer, more compassionate father than Fred Trump, could he have become a ferocious advocate for the nationalist left, a kind of American Jacobin?

I’m afraid this is where the joke must end. Trump’s modus operandi is to get, not give. He is a walking appetite. He likes cheap labor when it works for him, like the illegal Poles employed at his construction sites in the 1980s and, more recently, the undocumented Latinos who toiled in his clubs and hotels. If he really wanted to help working people hurt by the North American Free Trade Agreement, he would have broken with what he still calls the ‘stupid Republicans’ and allied himself with Democrats to promote an increased minimum wage and a public works program. Instead of attacking Amazon’s Jeff Bezos with words, he would have pushed his Justice Department harder to attack the billionaire chiseler and monopolist in court. And he would have brought the troops — none of them wealthy draft dodgers like Trump himself — home from Afghanistan and Iraq. The self-pitying Trump lacks guts, not just principles.

Nevertheless, self-absorbed, greedy and inarticulate do not equal stupid, and Trump is not far off about Joe Biden’s evident somnambulism when he calls him ‘sleepy Joe’. However, Biden didn’t sleep through his votes for Nafta, Permanent Normal Trade Relations with China, the bankruptcy bill, or the repeal of the Glass-Steagall act — and this should worry the Democrats. When Trump boasts ‘I put tariffs on China [worth] tens of billions of dollars and I gave…a lot of that money to the farmers because they were targeted by China’, he almost sounds like he believes in fairness and redistribution of wealth. As a stalwart neo-liberal of the Clinton variety — a champion of most things anti-labor, pro-Wall Street and pro-free trade — somnambulant Joe doesn’t realize that Trump, when it suits him, is smart enough to run to his left. To the left of Biden, that is.