The Fred Astaire of Fifth Avenue cuts a global figure 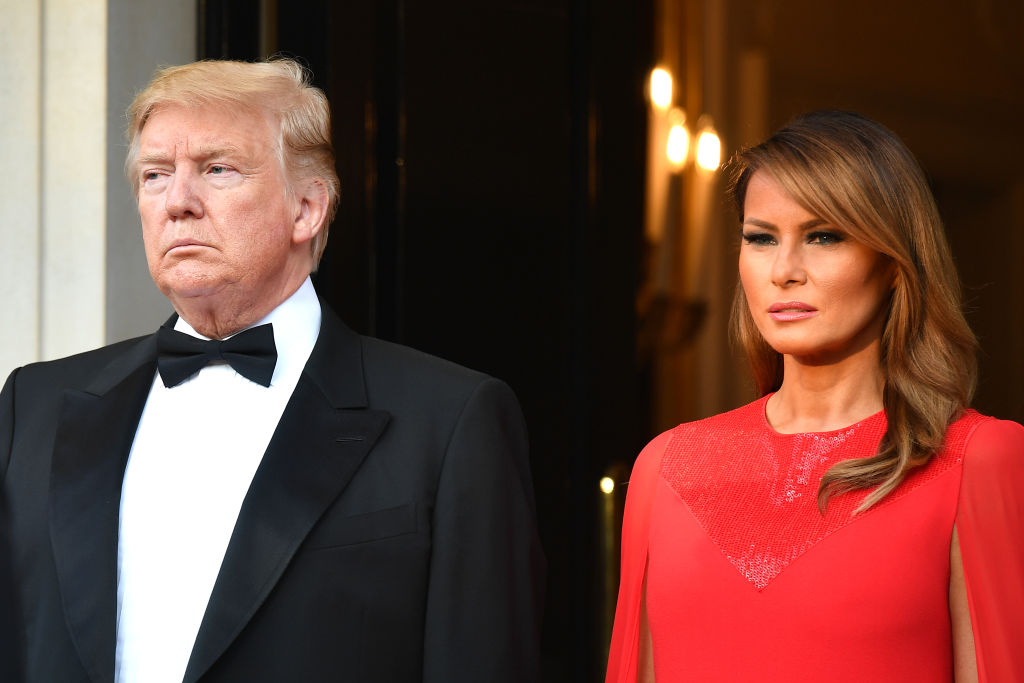 LONDON, ENGLAND – JUNE 04: U.S. President Donald Trump and First Lady Melania Trump host a dinner at Winfield House for Prince Charles, Prince of Wales and Camilla, Duchess of Cornwall, during their state visit on June 4, 2019 in London, England. President Trump’s three-day state visit began with lunch with the Queen, followed by a State Banquet at Buckingham Palace, whilst today he will attend business meetings with the Prime Minister and the Duke of York, before travelling to Portsmouth to mark the 75th anniversary of the D-Day landings. (Photo by Jeff J Mitchell/Getty Images)

One of the clearest indicators of the Decline & Imminent Fall of Western Civilization has been the collapse of all rules, norms and standards pertaining to men’s formal wear.

This trend was accelerated as long ago as 1960, when the ever dapper John F. Kennedy showed up at the traditional Al Smith dinner wearing a tuxedo instead of the correct and traditional white tie and tails. Ironically it was Richard Nixon, properly clad and closely shaven, who looked smashing that night. The decline in presidential presentation reached its nadir in 1989, when George H.W. Bush, eschewing the formal morning suit worn by Ronald Reagan, John F. Kennedy and virtually every modern president, showed up at his inaugural swearing in ceremony wearing a dark blue suit, as if he was taking a meeting with the American people.

In 2016, I mounted a Thermopylae-style defense of correct male attire at President Trump’s inauguration. Unfortunately, the other 300 Spartans failed to show. I wore the correct morning suit, but was wrongly accused of looking like a Batman villain. Such is the plight of those who cling to sartorial standards amid the barbarism of cargo pants, dress-down Fridays, and Tommy Bahama novelty prints. Sadly, President Trump is following the G.H.W. Bush precedent. Rather than be properly clad like Reagan at his inauguration, Trump chose to be sworn in in a dark suit as somber as the mood of his speech, but enlivened by the slashing red of his trademark power tie. Yet President Trump recovered his sartorial poise that very night, by donning the correct white tie and tails for his Inaugural Balls, even though most of the revelers present were incorrectly wearing what Americans call a ‘tuxedo’ and Brits, more firmly rooted in tweedier and less trendier times, properly call a ‘dinner suit’ or ‘evening dress’.

For his current state visit to the United Kingdom, the home of Savile Row, the president has returned to the traditional rulebook. He attended a banquet thrown for him by Her Majesty the Queen at Buckingham Palace in the correct white tie and tails. As Fred Astaire once observed, no man can look bad in this outfit. Despite the objections of a London tailor popular, I’m told, with actors, comedians, journalists and other ‘entertainers’ fond of loud checks, the president was no exception. The fact highlighted by his carping critics, that the president’s tail-coat was too short or his waistcoat was too long is irrelevant; the outfit itself was correct and appropriate.

For his private meeting with Prince Charles, the president reverted to a classic business suit. But it is noteworthy that the president still prefers the two button full-shouldered Brioni look, while the Prince was wearing a three button ‘roll to two’ style hand-tailored for him by Anderson & Sheppard of Savile Row. An ironic turn: in the Fifties, Anderson & Sheppard were the first port of call for Americans in need of a classic English suit. The three-button ‘roll to two’, sported here by the traditionalist prince, was worn most famously by a New World icon, Cary Grant in Hitchcock’s North by Northwest.

Due to chronic and epidemic TDS (Trump Derangement Syndrome) both here and in the United Kingdom, everything and anything the president and First Lady say, wear, eat or do will be viciously attacked. But sartorially at least, President Trump got everything on his London trip right. We might say that, speaking off the cuff, the international stage ‘suits’ him.