Can Volodymyr Zelensky go from comedy star to the leader of Ukraine? 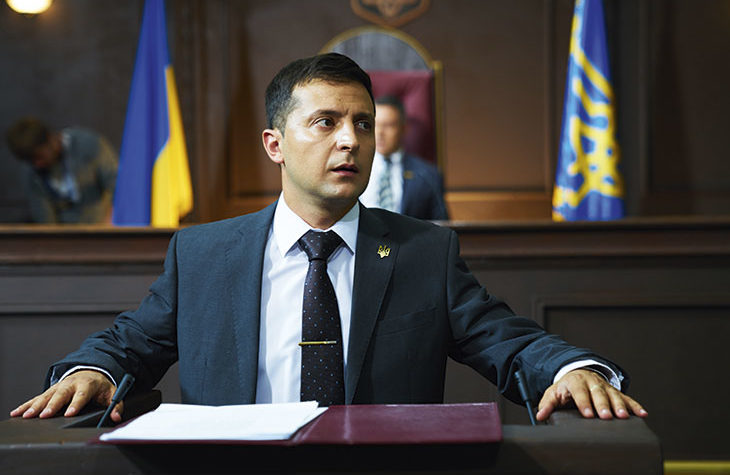 Servant of the People is a hilarious Ukrainian situation comedy currently running on Netflix. It opens with a young high-school teacher launching into a foul-mouthed rant against the corruption and venality of his country’s political class. ‘Why are all the honest people fools and the clever ones are thieves?’ shouts nerdy but honest history master Vasyl Holoborodko to a colleague. ‘What kind of people are we, that we keep voting for these mother–fucking liars knowing that they are crooks?’

One of Holoborodko’s pupils secretly films the rant through a window. The video goes viral. Millions of Ukrainians crowdfund the honest teacher to stand in an upcoming presidential election, which he unexpectedly wins. Cue a two-season long comedy of errors wherein president Holoborodko struggles to take on entrenched corruption and break the stranglehold of shadowy oligarchs — with the help of his old schoolmates, whom he appoints as his ministers.

Like NBC’s The West Wing, Servant of the People could be written off as simply a heartwarming exercise in liberal wish-fulfillment — if the show’s plot weren’t about to actually come true.

Actor and comedian Volodymyr Zelensky, who plays the idealistic Holoborodko, is the frontrunner in Ukraine’s upcoming presidential elections. The party he heads, also called Servant of the People, is standing on a radical anti-corruption program based more or less exactly on the script of the TV show. Like his fictional counterpart, the 41-year-old Zelensky is an utterly improbable candidate. Though he trained as a lawyer, he never practiced and went straight into stand-up comedy, becoming a national celebrity after a head-turning performance on Ukraine’s version of Dancing with the Stars. Before founding his party last May, he had no political or administrative experience. He’s also short and Jewish — a considerable, though largely unspoken, obstacle in some quarters of a country not known for its philo-Semitism.

At least the script of Servant of the People — also penned by Zelensky — shows that he is under no illusions. The vested interests that the fictional Holoborodko tackles are all perfectly accurate: from corrupt army generals and spy chiefs who double as Mafia bosses to oligarch puppet-masters who control the media and buy politicians like watches. To tame his rogue spymasters, Holoborodko hires his old schoolmistress to head the Ukrainian Security Service (SBU), on the grounds that the stern old battle-axe is the most terrifying person he has ever met. But the spooks quickly get the better of their new boss by spiking her tea with psychotropic drugs and filming her resulting antics. The scenario is a bitterly ironic nod to the real-life poisoning of presidential candidate Viktor Yushchenko in 2004 by rogue secret police, which left him near death and his face hideously disfigured.

But he’s equally clear-eyed about the temptations of power to the good guys who come to office thinking they are on the side of the angels. In the show, the venal family of president-elect Holoborodko immediately go on a shopping tour (collecting bagfuls of free clothes from fawning retailers) and set about filling their apartment with expensive art. The wife of the president’s new defense minister leaves him when he refuses a fridge-sized cardboard box filled with cash that is delivered to his doorstep.

In the world of television comedy, the idealistic young reformer (spoiler alert) wins. In the real, cut-throat world of Ukrainian politics, not so much. Just about every president since 2004 has come to power on a platform of tackling corruption — and Ukraine has gone through two bloody revolutions, in 2004 and 2014, in an attempt to rid itself of endemic graft. Yet all of these anti–corruption populists, including incumbent president Petro Poroshenko, have quickly betrayed the hopes of the voters and themselves sunk into the mire. Ukraine, a highly educated nation of 43 million, the size of France, is tied with Moldova as Europe’s poorest nation. It ranks joint 120th of 180 nations in Transparency International’s annual corruption perceptions index. Poroshenko himself has been accused of choosing political survival over battling corruption.

Ukraine’s problems are most starkly illustrated by the great port city of Odessa. In May 2015, Poroshenko appointed the former president of Georgia Mikheil Saakashvili as governor of Odessa. The firebrand reforms Saakashvili tried floundered in less than 18 months, scuppered by an entrenched local elite. Last year anti–corruption campaigners Mikhail Kuzakon and journalist Grigory Kozma narrowly escaped being crushed when a truck plowed into their stationary car. Others have been shot and stabbed. Odessa’s mayor, Gennadiy Trukhanov, is currently on trial for allegedly embezzling $6 million — but a conviction seems distant. ‘If it were profitable to Kiev to convict Trukhanov, it would already have happened,’ Kuzakon said in a recent online video post in which he accused Poroshenko of granting ‘impunity and control of cities and regions to criminal groups’ in return for political support. Poroshenko hotly denies this.

Clearly, Servant of the People has touched a nerve. Ukrainian voters are fed up with generations of lies and of seeing the same old faces on the political carousel. One of Zelensky’s rivals in the presidential race is former prime minister Yulia Tymoshenko. Once famous as the blond-plaited heroine of the 2004 Orange Revolution, Tymoshenko later became embroiled and was imprisoned for her role in striking natural-gas deals with Russia. No surprise, then, that a radical outsider with no political experience, familiar from the television, who vows to drain the political swamp is doing so well. In many ways, Zelensky is a liberal mirror-image of Donald Trump.

The same mood of disgust with the old guard has also caught on in Slovakia, where 45-year-old lawyer Zuzana Caputova is frontrunner in the presidential elections this weekend. If elected, she has vowed to radically reform the police force, the prosecution office and the judiciary, introduce same-sex marriage and environmental controls.

Slovakia is a stable EU member. But Ukraine is a country at war, partially occupied by a hostile and implacable neighbr. The smiley, fresh-faced Zelensky will no doubt be excellent at providing warm, fuzzy feelings as he jails crooked police and mayors. But can he be a wartime leader able to face down Vladimir Putin? ‘When Putin departs, and if Russia ever comes to reject empire building, Ukrainians will be perfectly entitled to elect a clown as their president,’ argues Alexander J. Motyl of Rutgers University. ‘Until that time, however, they should realize that leading a country in today’s dangerous world is no joke.’

With Zelensky leading in the polls with 20.7 percent of votes (incumbent Poroshenko is second on 11 percent and Tymoshenko on 8.1 percent), the political dirt has already begun flying. He’s been accused of being in the pocket of oligarch Igor Kolomoisky, on whose TV channel Servant of the People has aired. Both are Jewish, which has triggered suggestions of a Zionist plot. Zelensky has denied receiving any backing from any oligarchs — and says his campaign has been funded by the receipts of his highly successful TV production company as well as internet crowdfunding, just as in the TV show.

Despite his inexperience — or indeed because of it — Zelensky might be well-placed to bridge some of the bitter divides that have split Ukraine since the Russian annexation of Crimea in 2014 and the Russian-backed secession of Donetsk and Luhansk. Like more than half Ukrainian citizens, he speaks Russian at home, not Ukrainian. Interestingly, Servant of the People was made almost entirely in Russian, on the grounds that almost all Ukrainian speakers know Russian but many Russian speakers don’t know Ukrainian. The forcible imposition of Ukrainian as a national language, including in schools and universities, has been a major cause of resentment in the Russophone east of the country. In 2015 Zelensky spoke out against nationalists’ calls to ban Russian artists from performing in Ukraine — and though he is calling for his country to join Nato and the EU, he has resisted the inflammatory anti-Russian rhetoric of Poroshenko.

A country desperate enough to elect a TV actor president in the hope that his script of political reform will come true is clearly one in dire straits. But perhaps a political outsider like Zelensky stands a better chance than any of the failed old guard. Stay tuned to see how successfully Ukraine’s top political soap opera makes the most remarkable platform-transfer ever attempted — from fiction to reality.