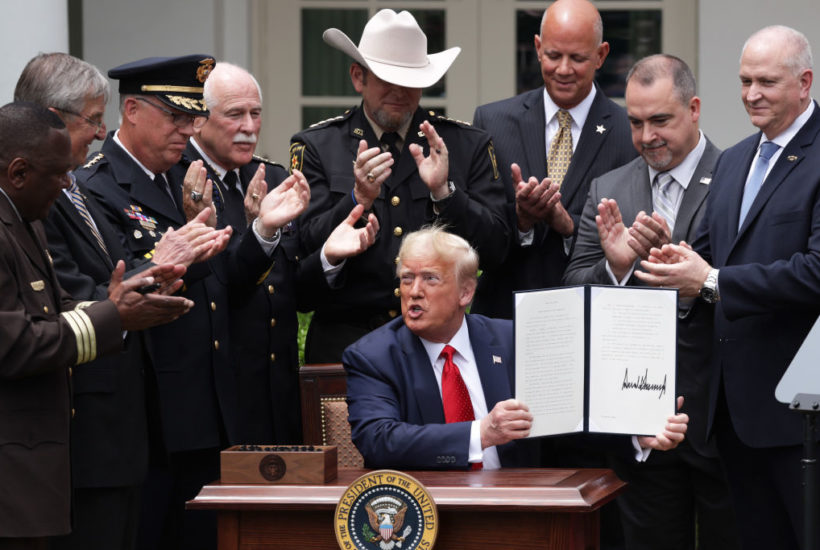 Surrounded by members of law enforcement, Donald Trump holds up an executive order he signed on ‘Safe Policing for Safe Communities’

Donald Trump’s efforts to broaden his appeal to the African American community are bearing fruit. Rasmussen polling noted in early June that Trump’s approval rating among African Americans stood at 41 percent, far above the 8 percent of votes he received from that community in 2016. While approval ratings don’t necessarily translate to votes on Election Day, it mathematically would be very hard for Joe Biden to win in the key battleground states should Trump double his vote to 16 percent of African American voters.

Trump’s opponents are convinced that his record as president and his response to the Black Lives Matter protests mean his popularity with black voters will go down. But the truth may well be the opposite.

Barack Obama, despite being the first African American president, failed to deliver criminal justice reform — a top priority for black voters — after eight years. Trump got it done in two. Trump also increased funding for Historical Black Colleges and powered an economy that, before the pandemic, drove the unemployment rate for African Americans to an historical low.

Equally important, Trump has sided with ‘law and order’ once the George Floyd protests turned into riots and statute tumbling — without giving succor to some of his more racially divisive supporters on the right. Democrats make a big and arguably racist mistake in thinking that black voters are allergic to the idea of law and order. According to Rasmussen, 67 percent of African Americans are most concerned about public safety where they live. Contrary to the spin from the Black Lives Matters leaders, African Americans know by experience that the police aren’t the cause of death and mayhem in the black community; rather, the police are the force that has kept the criminal elements at bay. It is the police who have saved thousands of black lives as murder rates across America plummeted from the 1990s onwards.

Trump’s vocal support for safety and security is resonating in the black community, especially as the crime rate in the big cities has jumped since the start of the protests. Democratic mayors and city councils have pulled back on public safety and moved to defund the police, and the criminal elements are willing and able to exploit gaps in security. This past weekend in Chicago, 63 people were shot, with sixteen killed including a one-year-old and a 10-year-old. In New York City, weekly shootings jumped 358 percent from a year earlier, with 35 victims this past weekend.

In the Seattle Capitol Hill Autonomous Zone, or CHAZ, which was run by protesters, an unarmed African American teenager was killed on Monday night. That was the fourth shooting in the CHAZ area since it was cordoned off from Seattle. The area was finally cleared out by police on Wednesday. Black Lives Matter has remained silent about this latest shooting, as the group is about the thousands of African Americans killed every year in America’s democratically-controlled cities.

Trump isn’t being silent. He is continuing to push for the arrest and prosecution of the people engaging in mayhem and murder. He made a mistake when he retweeted a video of an elderly Trump supporter, apparently not realizing the supporter shouted ‘white power’ in the video. Trump promptly deleted the tweet. That didn’t stop a White House CNN reporter from asking the idiotic question about if Trump was glad the North won the Civil War. But most voters, black and white, aren’t convinced that Trump is a white supremacist, no matter often how many times the media tells them he is.

One of the lessons from the 2016 election was that people voted for Trump despite telling pollsters they wouldn’t. It is likely that phenomenon will occur again in 2020 though this time also in the black community. Given the societal pressure not to vote for Trump, it is perfectly understandable that people don’t want to admit they support the President, especially in a community that went against him in 2016 by a 92 percent majority last time.

But the Trump campaign is cultivating a silent rebellion among black voters against the Democratic party. For a glimpse of the approach, watch the ‘Healing, Not Hatred’ video featured on his YouTube channel or this powerful video he promoted on Twitter three days ago. Sen. Tim Scott’s police reform bill that Democrats refused even to allow debate on won’t go unnoticed in the black community. Trump will continue to push for law and order because he knows it secures both the votes of police officers and their families and the silent minority of African Americans who want greater safety and security in their communities, which their Democrat leaders have utterly failed to provide.

Just as blue-collar union workers turned to Trump in 2016 after years of being left holding an empty bag by the Democrats they elected, one outcome of the Floyd murder just may be that a small, but growing minority of African Americans turn to Trump and the Republican party to do for them finally what the Democrats have promised to do for 50 years. It could be another political earthquake.