Trump likes to keep his enemies close and his hawks closer 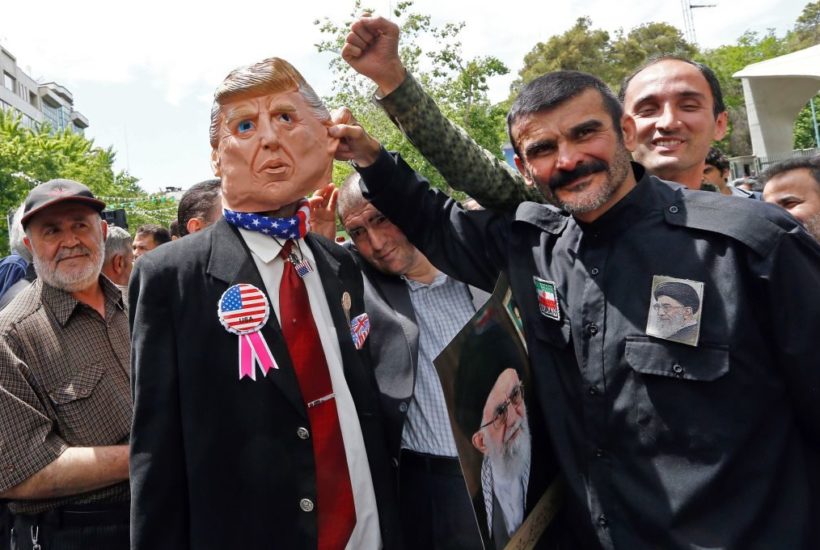 Donald Trump has an itchy trigger finger, and his name is John Bolton. The president’s national security adviser is a lifelong war hawk who, unlike Trump, was a diehard supporter of the Iraq War. Now Bolton has Iran in his crosshairs. He’s not the only member of the administration drawing a bead on the mullahs. Secretary of State Mike Pompeo is also a throwback to the mentality of the George W. Bush years of high misadventure in the Middle East. But Trump, believe it or not, is smarter than the last two presidents, who started fires they couldn’t extinguish in Iraq and Libya. As his maneuvers with North Korea show, war is not the way he expects to win.

To understand what Trump is up to, one has to forget the conventional wisdom of US foreign policy. That wisdom has led to a string of failures, and not just obvious ones such as Iraq and Libya. Two decades of Nato expansion have not made Russia more tractable; trade policies predicted to lead China to political liberalization have not only failed but built that country into a rival to America’s own industrial power.

All the clever tactics brought to bear on North Korea, from smooth talk to sanctions, failed to keep the Kims from acquiring nuclear weapons. A complete change in how Washington dealt with the world was long overdue.

At first Trump seemed to mean more war, not less. He rattled his saber, or at least his Twitter account, at the ‘Little Rocket Man’ in Pyongyang. By the end of 2017, war with North Korea looked as likely as it does with Iran now, or indeed likelier. Instead, Trump swerved to diplomacy, and although denuclearization of the Korean peninsula remains out of reach, he has not given up talking to Kim. Even the North Korean dictator’s resumption of missile testing has not discouraged Trump. Kim won’t give up his weapons, and Trump knows it. The president’s goal is not to achieve the impossible but to shift relations into a more flexible framework. His strategy is to cultivate patience.

​The stance toward Iran looks quite different: withdrawing from the nuclear deal negotiated between Obama and Tehran was an expression of impatience, as are the escalating sanctions that Trump has imposed. Regime change is on the agenda for Iran in a way that it is not in North Korea. Key regional allies want America to fight Tehran. But Trump likes to keep his enemies close, and his hawks even closer: the presence of such belligerents as Bolton in his cabinet help give weight to America’s threats.

Flexibility is his watchword, and he is no more eager for a war in the Middle East than he is for one in the Far East. If economic pressure is not enough to crack the Islamic Republic from within, Trump is unlikely to attempt regime change from the outside. Instead he’s set to change tack as quickly as he did in his rhetoric toward Kim. Rumors abound in Washington suggesting Bolton might not be at the president’s side much longer. Perhaps the current escalation of tensions with Iran is his high noon.

For Trump, scrapping US participation in the Iran deal was an end in itself, something his party’s voter base and hawkish elites both demanded. The hard line his administration has continued to take is representative of elite opinion — the neoconservatives are still a loud, relentless chorus. Trump has taken the path of least resistance by giving them what they want, including appointing Bolton.

But war in the Middle East is a different matter entirely, something many Trump voters, to say nothing of the country at large, oppose. Trump’s personal instincts are toward military non-interventionism. He is unquestionably a brilliant interpreter of the nation’s temperament. That’s what got him elected over Hillary Clinton, and what won him his party’s nomination against more than a dozen rivals. Trump had a better feel for what voters wanted. And voters are not clamoring for another Iraq or Libya.

​The demand for regime change in Tehran comes mostly from the Middle East itself, especially Saudi Arabia. The Saudis have been fighting a war with the Iranian-backed Houthi rebels in Yemen, a personal project of Crown Prince Mohammad bin Salman. He would be pleased to see Bashar Assad in Syria lose Iranian support. An end to Iranian support for Hezbollah would be a great relief to Israel as well. But wars and revolutions in the Middle East have a way of not turning out as those who plan for them expect, and upheaval in Iran would in all likelihood lead to even greater instability throughout the region. Whatever the case, no vital US interest and nothing like Western liberal or democratic values is at stake. Gulf money can buy a lot of influence in Washington, but probably not enough to get America to gamble on more than financial coercion of Tehran.

​And there are other governments whose voices matter. Would Westminster be an eager partner for Trump in a new Middle East mission? Parliament in fact played the critical role in keeping the Obama administration out of a war in Syria. After David Cameron lost the vote to authorize British military action against Assad in August 2013, Obama faced the prospect of going to war without the kind of alliance that George W. Bush had a decade earlier. Military inconveniences aside, embarking on war virtually friendless creates a certain aura of illegitimacy. And for Trump to go to war today with only friends such as Riyadh would be even more unsightly. There’s little appetite in the European Union even for the economic warfare his administration has waged.

​And Russia? Assad’s other crucial state supporter is not ready to give him up, and though the Russians have their own difficulties with Iran, the countries remain allies of convenience. The hawks in the Trump administration are as anti-Russian as anyone, but once again the president is another matter. Watch out, though, for Republican developments over the next few years — come 2025, a post-Trump Republican hawk in the White House might see Russia’s alignment with Iran as simply augmenting the case for war. Bolton can only twitch as Trump’s finger. He and fellow hawks could get the shootout they so badly want if another figure, say Vice President Mike Pence, became the next Republican Commander-in-Chief.