Would the president break his promise not to do any foreign deals? 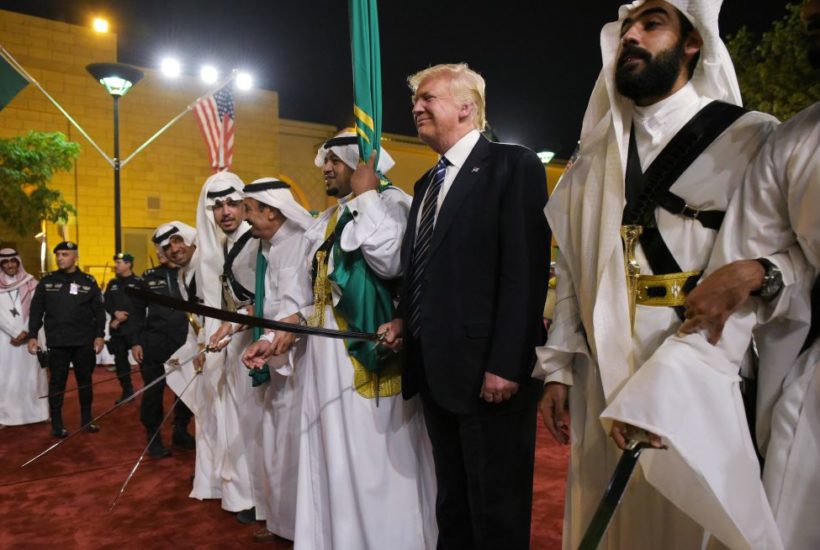 President Trump’s love affair with the House of Saud is a matter of record. His first foreign trip after winning the election was not to Mexico or Canada, America’s neighbors and the traditional first destination abroad for a new president in office. It was not to a Nato ally or even to Israel. It was to Riyadh, where the Saudis were said to have spent $68 million entertaining him. This led to the most ridiculous presidential photo opportunity in recent memory — Trump and various Middle Eastern dictators and potentates fondling a large illuminated ball — but for the Saudis, it was money well spent. As they hoped, President Trump has been tough on Iran. And Trump stood by the Saudi ruler, Mohammed bin Salman, when he was accused of ordering the murder of the journalist Jamal Khashoggi.

When Trump visited Riyadh, perhaps he noticed that the Saudi capital is blessed with a number of luxurious hotels: the government’s own private hotel for official guests, the Four Seasons, the Ritz-Carlton, and the Faisalia, built by the Bin Laden family, which gives each guest their own personal butler in pinstriped trousers and black jacket. And perhaps he was saddened by the fact that no Trump Tower hotel and condo development graces the Riyadh skyline. A source tells Cockburn that steps have now been taken to rectify this. The source says that a senior executive from the Trump Organization visited Riyadh in the spring, staying at the Ritz-Carlton. (The Ritz-Carlton seems to be the Trump Organization’s favored hotel when a Trump building is not available. It’s where Trump stayed in Moscow during his visit to the Miss Universe contest in 2013.) The executive was ‘trying to get a deal’ for a Trump hotel in Riyadh.

The source tells Cockburn that he knows the Trump executive — and Trump himself — well and is certain of his information. The Trump executive is not returning Cockburn’s calls. And Trump himself has tweeted: ‘For the record, I have no financial interests in Saudi Arabia…Any suggestion that I have is just more FAKE NEWS (of which there is plenty)!’ This reminds Cockburn of Trump’s statement — in his first press conference as president — that he had ‘stayed away’ from deals in Russia. It was later discovered, by Congressional investigators and Robert Mueller, that his lawyer Michael Cohen and others had been furiously trying to do a deal for a Trump Tower Moscow. Will it be the same for a Trump Tower Riyadh?

Trump told a rally in 2015: ‘Saudi Arabia, I get along with all of them. They buy apartments from me. They spend $40 million, $50 million. Am I supposed to dislike them? I like them very much.’ And shortly after the election, a lobbying firm that represents Saudi Arabia in the US booked 500 nights at the Trump hotel in Washington, spending more than $500,000. So the Saudis have certainly showed willingness to do business with Trump and vice versa.

But what about the emoluments clause of the Constitution? It says that ‘no Person holding any Office of Profit or Trust under [the United States], shall, without the Consent of the Congress, accept of any present, Emolument, Office, or Title, of any kind whatever, from any King, Prince, or foreign State.’ In the 18th century, an emolument was a gift, profit, or advantage — which a deal for a new hotel in Riyadh would clearly be. No problem! The president is fine, on two counts. First of all, as he says, the emoluments clause is ‘phony’ and as everyone knows, you can ignore phony clauses of the Constitution. Secondly, when the president assumed office, he and his lawyers announced — while standing by large piles of manila envelopes to prove their point — that Trump would turn over ‘complete and total control’ of his businesses to his sons in order to avoid any conflicts of interest.

Trump and his lawyers said they were drawing up a trust agreement that would specifically prohibit the Trump Organization from doing any new deal with a foreign government or member of a foreign royal family, or anyone acting for them. The Trump Organization has never actually released this trust document. But could it be that negotiations are taking place for a Trump Tower in Riyadh that would be announced after the votes have been counted in the 2020 election? This might stick to the letter of the — still secret — Trust, if not the spirit. But surely the president would not behave in this way?