Today’s progressive kink is pain inflicted by the President 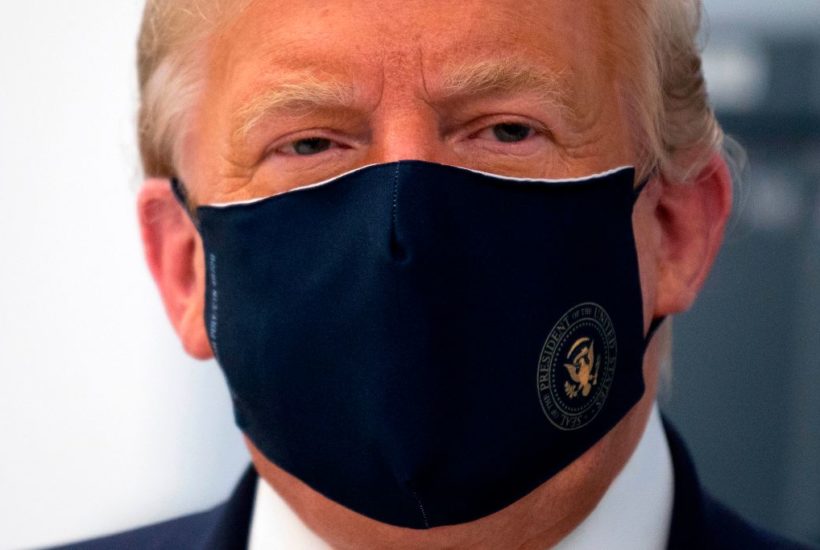 Donald Trump in his mask (Getty)

Welcome back to the Red Room, Democrats. On Thursday morning President Trump fired off a stream of consciousness tweet tinkering with the idea of delaying the election.

With Universal Mail-In Voting (not Absentee Voting, which is good), 2020 will be the most INACCURATE & FRAUDULENT Election in history. It will be a great embarrassment to the USA. Delay the Election until people can properly, securely and safely vote???

Imagine how your typical online Democrat seizes on that garbled statement. It’s a chance to release all her tension, under the guise of fighting a big bad tyrant. She feigns rage publicly — but deep down she is truly titillated.

The President has created a class of masochists, and she is one of them. ‘Please daddy, don’t delay my election,’ she thinks, biting her lower lip as she taps out ‘#OrangeManBad’ on her keyboard and prepares to max out her donation to the Amy McGrath Senate campaign.

The Twitter progressive pores over every character of Donald Trump’s tweets with the kind of fervor you’d expect from a women’s book club discussing 50 Shades of Grey. Like Pavlov’s dog, she salivates when the chime goes off on her phone, alerting her: the President has posted. Watching Trump once again ‘disrespecting the office’ by jabbing ‘Cryin’ Chuck Schumer’ or ‘little Adam Schitt’ offers her an endorphin rush like no other.

It’s not just women, of course. All Democrats are now so hooked on submission that E pluribus victim might as well be their new motto. The dirtiest Democratic secret? The lust makes their party far healthier with another four years of Trump.

Trump in office is the only thing keeping the scraps of Michael Moore’s career afloat. Bill Maher will have another few years of lazily keeping up his schtick as a sensible liberal — especially if the President fulfills Maher’s fantasy of contesting the election outcome. Another four years of Trump would grow CNN’s Jeff Zucker’s fortune so much he could afford to hire another thousand journalists just to report on Fox News.

These kinky capers are popular with Democrats far and wide. New York’s progressive governor Andrew Cuomo depicts Trump as his dom to distract from his own incompetence. When not sanitizing his hands and the rods between his nipples, Gov. Cuomo appears on his brother’s CNN show to lament all the ways Trump has been inflicting the pain.

In the forthcoming election, there could be a daunting shift in the power balance for Democrats. On the one hand, perhaps they’ll get what they ‘want’: Trump leaves office and they get to be in control. On the other, though, is the more thrilling option: they are ‘punished’ with Trump’s second term. Unless, of course, the vote gets delayed somehow — wouldn’t that be humiliating?