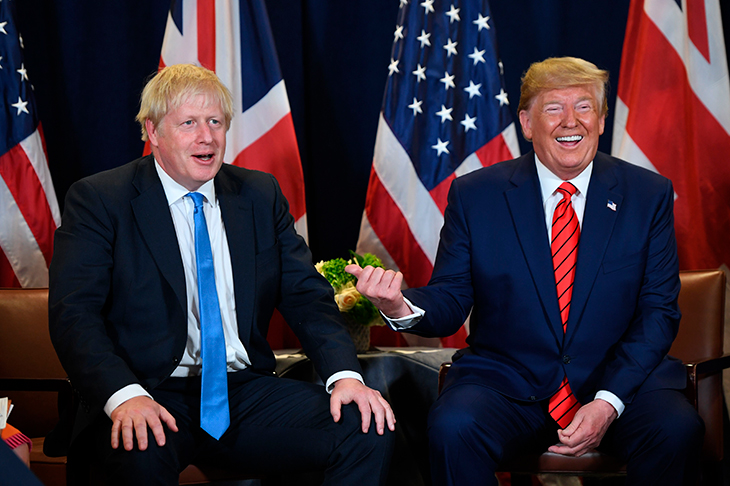 In the next few days, on December 3 and 4, Prime Minister Boris Johnson will host a grand international conference of 29 North American and European nations to mark the 70th anniversary of the foundation of Nato — the North Atlantic Treaty Organization, which, led by the United States, kept the peace during the fraught years of Cold War confrontation with the Soviet Union. We are told that the Queen will give a reception in honor of the heads of state and government and that Donald Trump has accepted the invitation.

Just over a week later, the British general election takes place. Intrinsically the two events are quite unconnected. In reality they are bound together by the common menace of the president of the United States, who bobs beneath them like an untethered floating mine.

It is hard to think of an international conference more ill-timed than Nato’s celebration, slap-bang at the culmination of its host country’s election campaign. It is not the fault of the Nato planners, who organize these things months in advance. How were they to know that Brexit would erupt into a second national election little more than two years after the last, and with a fixed-term parliament act supposedly in place?

When I first joined the Diplomatic Service, there was a well-nigh sacred convention that western democracies did not intervene in each other’s internal affairs, especially elections. That meant avoiding state and official visits during the sensitive period immediately before election day. You did not make public comments about the party leaders or their manifestos, and above all you did not express a preference between them. (I once asked a Soviet official who he wanted to see win our 1970 general election. He growled: ‘They are all jackals from the same lair.’ That was the Cold War for you.)

The convention was tested to near destruction in the 1970s during the Eurocommunism scare, when in Washington, London and Nato headquarters there was a great fear that in Italy and the Iberian countries a communist party might be legitimately elected into government. We tied ourselves in knots debating whether and how to influence these elections — and what to do if the communists prevailed. That never happened and the moment passed.

By and large western democracies have been good at keeping out of each other’s politics. But there have been slip-ups over the years between London and Washington, perhaps because of their very closeness. Neither Ronald Reagan nor George Bush Sr bothered to hide their disdain for senior figures in the Labour party. John Major got into hot water with the Democratic party when, on his watch, the Home Office investigated Republican claims that a young Bill Clinton, on a Rhodes scholarship to Oxford, had applied for British citizenship to dodge the Vietnam draft. Major apologized. Tony Blair, on the other hand, despite the closeness of his relationship with Clinton’s Democratic party, was scrupulous in avoiding any public favoritism in the Bush/Gore contest of 2000.

This is not a potted register of calculated maneuvers to influence the electoral outcome on one side of the Atlantic or the other. There was President Obama’s unhappy intervention in the 2016 referendum campaign at David Cameron’s behest. Against his better judgment, so we are told, Obama threatened to send the UK to the ‘back of the queue’ for a free trade agreement if we voted to leave the EU. This proved a disastrous gambit. It blew up in the government’s face. People do not respond well to threats from grand foreign carpet-baggers, even amiable Americans, who are remote from their everyday lives.

But Obama’s intervention was as nothing compared with Donald Trump, with his fondness for disruption and unthinking improvisation. And herein lies the danger to Nato, to Johnson and even to the Queen. (Her Majesty will be praying, I imagine, that the president will have no words of unsolicited advice on the matter of her second son.) It is potentially incendiary.

If it suits him — and much will depend on whether he needs a distraction from news emerging in the US on, say, impeachment — Trump will not hesitate to leap feet first into our election campaign. He did so this year in Israel. The closeness of the summit to election day will be an added temptation. He has already meddled several times in our politics, questioning Theresa May’s negotiating tactics with the EU, criticizing Johnson’s withdrawal agreement, and giving support to both Johnson and Nigel Farage at various times. It is the kind of thing he loves to do and he may genuinely think he is being helpful. (Mind you, Hillary Clinton, while flogging her book last week in London, had no inhibitions about wading into UK politics at a sensitive electoral moment and calling the government ‘shameful’. She, of all people, should have known better.)

Boris Johnson needs to be ruthlessly pragmatic. His first, second and third priorities are to win the general election. Trump’s public support would be the kiss of death. It would send Jeremy Corbyn into hog-heaven, giving a turbo-boost to his claim that the Tories are bent on selling off chunks of the National Health Service to American companies. With Trump Boris must next week sup with the longest of spoons; and if this injects more than a touch of coolness into the relationship, so be it. A free trade agreement with the US is no holy grail and will be desperately hard to negotiate. Besides, there is little point in further work on the agreement in case a new president and administration are in harness just over a year from now. It’s a case of festina lente.

The hope must be that the Nato meeting agenda will be sufficiently charged and interesting to keep Trump occupied. It is not as if there are not issues which demand a constructive American input. The Turks, who have anchored Nato’s eastern approaches from its creation, are drifting off to follow an Ottoman vocation. President Macron has recently declared the organization ‘brain-dead’. Trump will doubtless continue to give the allies a kicking for not contributing more to the common defense, despite pledges of greater expenditure.

Seventy years is a long time in the life of an international defense organization, especially one never tempered in the heat of battle with its declared adversary. The arteries fur, the reflexes dull, defense budgets shrivel, the sense of common purpose passes. Yes, this summit should be a time for celebration. But it must also be the moment for renewal.

That, anyway, is the hope. In reality it may take only one well-aimed question from a journalist for Trump to detonate his mine under both Nato and British politics. Prepare the lifeboats!