The Trumps are focused on securing the Senate 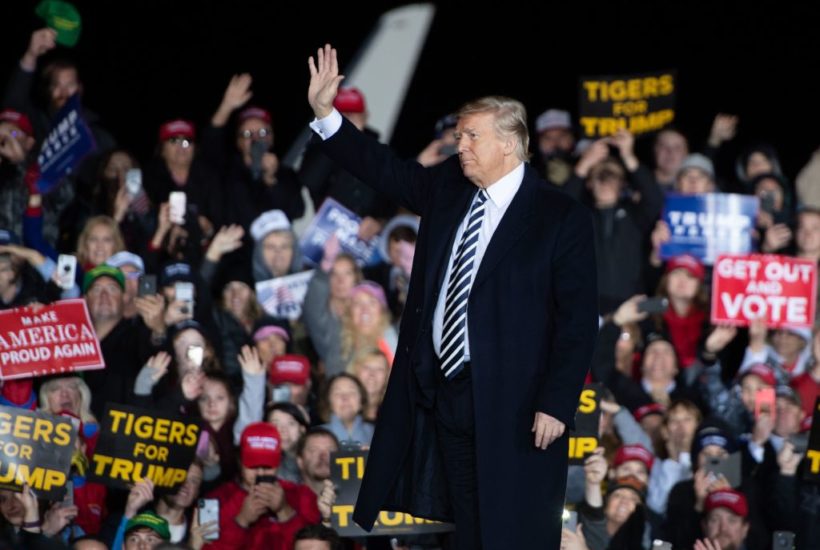 Will the King be toppled? No one is likely to observe of Steve King of Iowa, as nasty a piece of work as has ever served as a Congressman, ‘My heart is inditing of a good matter: I speak of the things which I have made unto the King.’ Intel and Land O’Lakes have rescinded their financial backing for him. King isn’t running any ads or even much of a campaign for reelection. His challenger J.D. Scholten, by contrast, has raised some $641,000 in the past two days.

At the same time, the press is brimming with stories about young people turning out in droves to vote. The Cook Report has revised its predictions to indicate that the Democrats may win up to 40 seats in the House. But the Senate looks further out of reach than ever as Donald Trump pursues a scorched earth strategy to boost Republican turnout in deep red states to ensure the defeat of the likes of Jon Tester, whose sin was to out the peccadilloes of Trump’s favorite doctor Ronny Jackson, or Heidi Heitkamp. Whether the robust employment numbers — 250,000 in new jobs last month—will help to propel Trump and the GOP is an open question; in 1994, they did little to sway voters from ousting the Democrats from Congress.

Whether a similar journey into exile looms for Republicans is something that the noted political expert Paul Theroux has weighed in to dispute. In his view, the notion that there may be a blue wave is simply bollocks. Are you a ‘shy Trump’ voter, someone who, like a Brit afraid to voice his support openly for the Tories, will pull the lever for the Donald in a few days? Theroux contends that there may be more of them than you think. He delivers himself of this verdict in an essay in the Washington Post, one that illustrates the dangers of letting travel writers loose to write about politics. Theroux’s is one of those particularly nettlesome essays; it oozes a weary disdain for those who fail to discern Trump’s insights, while pretending to a common-man-of-the-people tone.

Much of the Trump clan is pitching in to help overcome any lingering inhibitions in key red states. Ivanka was campaigning for Dean Heller in Nevada and is in Iowa today. Don Jr., and Kimberly Guilfoyle are barnstorming around the country on behalf of GOP candidates. There is, however, one person who has gone AWOL. Where on earth is Melania? CNN indicates that she appears to have zero interest in going on the hustings. Yet her approval rating is 13 percent higher than her husband’s. Maybe it’s because she’s avoiding getting enmeshed in partisan politics.

Already Trump himself is starting to look past the elections. Today he tweeted out a portrait of himself with the statement, ‘Sanctions Are Coming.’  Secretary of State Mike Pompeo spelled it out: ‘On November 5th, the United States will reimpose sanctions that were lifted as part of the nuclear deal on Iran’s energy, shipbuilding, shipping, and banking sectors.’ The European Union will not get a waiver. If Trump’s racial demagoguery fails to help the Republicans this November, he can always try the fresh gambit of a war in the Middle East for 2020.