Trump’s sunbed optimism is rubbing off on the world 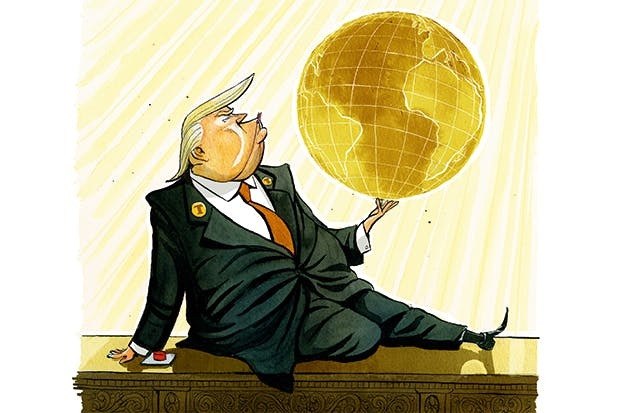 Donald J Trump’s State of the Union was as expected: long, boastful, cheesy — and largely right. Trump says he is creating a ‘new American moment’ — and it’s hard to deny that he is.

Before he was president, and even in his inauguration speech, Trump painted only a vision of America in ruins. Now, after a year of him in charge, his message is reassuring and upbeat. It’s not the same as Reagan’s sunny optimism — it’s more post-modern and surreal than that — but it’s not far off. You could call it Trump’s electric sunbed optimism. It’s feel-good, it’s a bit orange, and it seems to be rubbing off on the world. ‘Our families will thrive,’ he said in conclusion. ‘Our people will prosper, and our nation will forever be safe and strong and proud and mighty and free.’

Trump had prepared quite hard — his Twitter account has been notably quiet in the last two days — and he stuck to his promises theme, which was ‘building a safe, strong, and proud America.’

In a bit of good news for Brexit Britain, he stressed that he wanted to pursue bilateral trade deals ahead of multilateral ones. This is a Trumpist theme that had gone quiet recent, but seems firmly back in the agenda.

‘From now on, we expect trading relationships to be fair and to be reciprocal’, Trump said, and he declared an end to ‘decades of unfair trade deals that sacrificed our prosperity and shipped away our companies, our jobs, and our nation’s wealth’.

The focus was large domestic and economic. Trump stressed his greatest hits: his tax cut, his deregulation, his appointing of so many conservative judges, and his bringing back jobs to America. The truth is, never mind how much it hurts his critics, Trump has a lot to show off about.

‘Very soon, auto plants will be opening up all over our country’, he said, before mentioning Chrysler’s decision to move one of its plants from Mexico to Michigan as an example of industry coming back home. ‘This is all news that Americans are totally unaccustomed to hearing’.

He also reflected on his failure to repeal Obamacare and his intention to honour his campaign pledges to reform immigration. It was in other words, just like every Trump speech you’ve ever heard, only longer and slightly sharper.

The cheesy bits were really cheesy — but we knew they would be after he pulled similar stunts in his first address to the joint houses last year. Last night, he summoned an Ohio welder who plans to send his daughters to college with money saved from the tax cut. He heralded some first responders. He expressed the nation’s grief with some families who had lost loved ones to gang violence. And, in the longest applause line of the night, he consoled the parents of Otto Warmbier, a U.S. student who suffered fatal injuries while imprisoned in North Korea.

It may make the stomach turn a bit — but people seem to like it. A snap poll after the speech said three quarters of Americans had positive response to the speech.

Trump only mentioned Russia once — in a line about China. He didn’t mention the Mueller investigation. However, in a ‘hot mic’ incident as he left Congress after the speech he was overheard telling a Republican congressman that he would ‘100 per cent’ be releasing the infamous memo that allegedly shows how the Democrats conspired against him to cook up the Russia collusion scandal.