Will the universe end with a bang or a bounce?

The End of Everything (Astrophysically Speaking) by Katie Mack reviewed 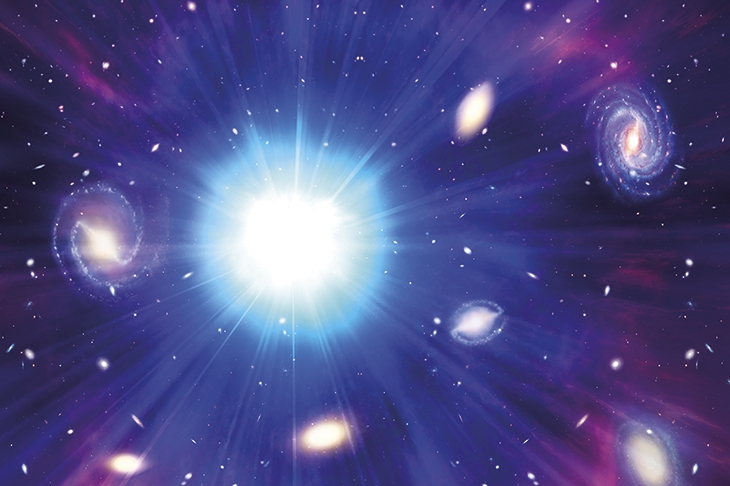 The End of Everything (Astrophysically Speaking) Katie Mack

The coziest way to read The End of Everything, Katie Mack’s fast-paced book about universal death, is as a murder mystery. Everything in spacetime, including the reader’s understanding of much of the story, is in the shadows. Black holes, quarks and gluons, Cepheid variables, the Concordance Model? Mere words, strewn across the floor. Believability, restraint and common sense? Left at the door. In the middle of the carpet is our butchered universe. How did it die? Squashed (‘The Big Crunch’)? Boiled (‘Heat Death’)? Eviscerated (‘The Big Rip’)? Burst apart from every pore (‘Vacuum Decay’)? To one side, almost dancing with excitement, is Inspector Mack, a theoretical astro-physicist at Carolina State University.

‘If this is all deeply confusing and mind-boggling, that’s totally okay,’ she says. Murder mysteries are supposed to be confusing when everyone in the story dies, including the perp, and the crime scene decomposes by leaking into a different dimension (death by ‘ekpyrosis’). ‘BUT IT GETS EVEN STRANGER.’

Mack loves capitals — and exclamation marks. She’s a Twitter sensation. Her academic papers include ‘Bounds on extra dimensions from micro black holes in the context of the metastable Higgs vacuum’; her Twitter feed shows pictures of shaved alpacas that look like poodles and the latest gossip from asteroid Bennu (which might hit the Earth — a bonus mini-crime there) in about 150 years. She is alive! And brilliant, and my neighbor’s six-year-old daughter loves her. I love her.

The first question is, what took the murderer of our universe so long? The prime suspect in most end-of-everything scenarios is gravitation. Sometimes it’s the weakness of this force that’s the giveaway. Every time you lift up a cup of coffee you overcome the gravitational pull of an entire planet, Detective Mack points out. How can something that weak have muscled galaxies together? Some accomplice must have been at work. But what? Patience reader, patience. Wait for Chapter 5.

In other scenarios, it’s the strength of gravity that’s the clue. When Einstein stepped out of his study after inventing the General Theory of Relativity the first things he saw — the constellations, the moon, his own hands — showed something must be missing from his equations. If he was right about gravitation, all the objects in the universe should be attracted to each other, like apples falling to earth, and the universe itself would have imploded billions of years ago. Yet there Einstein was, gazing up at it.

What would solve that conundrum? Perhaps if the universe began with an explosion? Of course! Then it would be spreading outwards, with force that would, at least for a while, overcome gravity’s attempt to squash it. The first experimental evidence that what was eventually called the Big Bang might really be the case, rather than just a convenient plug for an awkward theoretical hole, didn’t come from Type 1a supernovae at the edge of universe; it came from the squeal of steam trains, in the 1850s. As an engine rushes towards you, its pitch rises, and falls again as it vanishes down the line. The same for stars. As a star rushes towards you, its ‘pitch’ rises (into blueness: color is the equivalent of pitch for light) and falls back to red as it disappears towards the edge of the universe. This is exactly what our telescopes turn out to see. The universe is everywhere racing away from us, sensible thing. But this doesn’t mean that Earth is the centre of the Big Bang. It means that the crime scene is a currant bun. The universe is expanding like a blob of dough in the oven. All the stars (currants) are separating from each other in a puffing out of sky.

It wasn’t until the 1920s that Georges Lemaître, a Belgian Roman Catholic priest, proposed an expanding universe. And people didn’t quite like to listen to him because that suggested (if you extrapolated back) a point of creation, a first moment when all the currants were squeezed together. It hinted — good God! — at God.

‘If the cosmos were behaving, its expansion [after the Big Bang] would be about as simple as throwing a ball up into the air,’ says Mack. Throw feebly, and the ball goes up (the universe expands), turns and falls into the Big Crunch. Give your throw some Nasa and off the ball shoots, escaping faster than gravity can pull it back; the universe expands forever.

But our cosmos cannot be compared to a ball thrown into the sky. It does not behave. In the 1970s, cosmologists realized that the universe had done something truly outrageous in its misbehaving past. For the briefest shrieking flash of a sliver of a second some time in its teenage years, it inexplicably sped up, just as if the ball you’ve thrown aloft suddenly stopped slowing down and:

‘shot off into space for no reason. Exactly as weird, except this is for the ENTIRE UNIVERSE…I’m sorry for shouting. I really am. But I’m not going to sugarcoat this. The universe is frickin’ weird.’

There’s a lovely sense of playground scrabbling in Mack’s picture of scientific progress. Understanding of the universe doesn’t progress tidily, uniting experiment and theory in a mutually supportive, disciplined manner. It jolts back and forth in shrieks of confusion, wild ideas being flung about from all corners, some of them instantly demonstrated as nonsense, other proposals wasting brilliant minds for a generation or two before being eventually dispatched. The entire investigative program seems to evolve towards viable solutions in the same way that a virus might: all mutations ventured, the measure of success being not to fail.

What would explain that inexplicable expansion that’s against all the rules of gravity? Let’s say that whatever it is is invisible, does exactly what we want and is anti-gravity in a way unlike anything we’ve ever seen before. Let’s call it…um…‘Dark Energy’?

Con artists, quacks and religious zealots look on mathematically-led science with their jaws agape. Is there nothing these eggheads won’t believe if the equations tell them to? Yet, hands barely able to keep hold of the mathematical pummel, cosmologists charge on: tiny bubbles of vacuum death that could be about to engulf us in the next five minutes (the Big Slurp); ‘end-of-the-world’ universes occupying separate three-dimensional spaces known, spookily, as ‘branes’, that separate and slam together repeatedly in — to quote one of Mack’s many exquisite metaphors — ‘eternal, cataclysmic, cosmic applause’ (the Big Bounce).

But The End of Everything is already out of date. In this blissful subject, new insights arrive daily: the discovery that black holes have a lasting heartbeat, that they can dance — I’m not joking — and that Dark Matter (another type of mute, invisible, everywhere stuff, needed to explain the weakness of gravity’s hold on coffee cups) might have been present before the Big Bang. Who but a priest can begin to make sense of that?

The reader will, like Einstein, need a breath of fresh air after reaching the end of The End of Everything. But keep your eye on that W-shaped gathering of stars above you. It’s called Cassiopeia. Do you see the nebulous smear of light a couple of inches below the second bump of the W? That’s the Andromeda galaxy, racing towards us at 250,000 miles per hour. When the crash happens, the two supermassive black holes at the centers of our galaxies will fuse rather dramatically. I’m not spoiling the plot of The End of Everything by revealing this. It’s a small red herring on the way to the main crime.