According to French tradition, it is wrong to throw away old bread because it is sacred 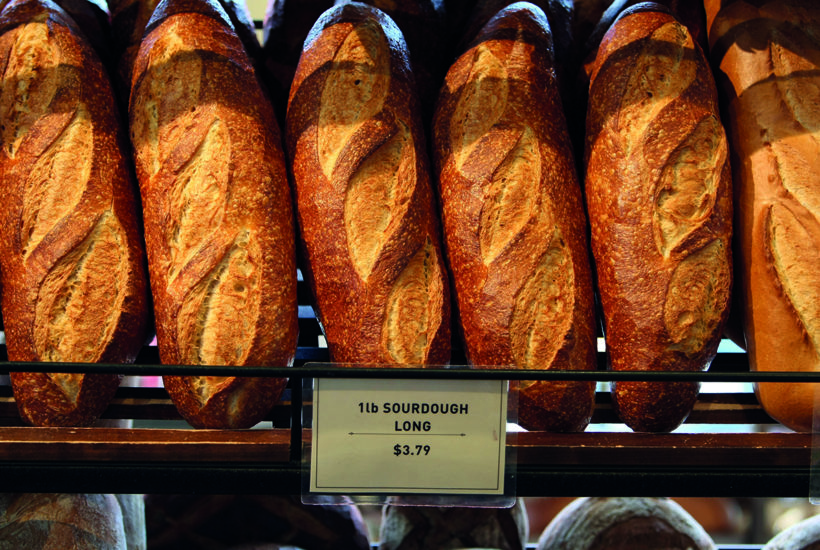 Hoping to win an election in 2020? If you’re not above buying votes, take a tip from the poet Juvenal, who described — disapprovingly, it is true — how Roman politicians in the second century used to bribe the lower classes with free sourdough bread and cutting-edge entertainment. (Yes, the Romans knew how to make sourdough — there are a few burnt loaves still around in the ruins of Pompeii). Nowadays it’s the millions of workers in the tech industry that you’ll have at your feet if you mention sourdough, but they want to bake it themselves, so you’ll do better handing out free workshops, countertop flour mills and Emile Henry bakeware.

Of course, anyone with a grain of sense would vote for a candidate who promised to outlaw Wonder Bread (great for plugging knotholes in your hardwood floor, not so good taken internally). But sourdough has become an obsession for highly paid Silicon Valley-dwelling tech-head programmer types. Why? Well, here’s my theory: they’re fascinated by the complexity of the process (which, as you’ll know if you’ve ever tangled with sourdough, is significant). They’re driven by their coder instincts to try to pin down the secret algorithm that will consistently generate that elusive ideal loaf, with its pitch-perfect tang, its well-set crusty ears and its photogenic texture (#CrumbShot, anyone?). And this, I’m sorry to say, is something of a pipe dream. Although many wonderful loaves have been produced by this scientific approach, there’s an unprogrammable aspect to the best bread that the most detailed spreadsheet and the smartest AI will never learn to reproduce, and it’s what I call the ‘Baked with Love’ variable.

If you’re a purist, the first great challenge of sourdough is that you must make your own starter, a flour-water slurry that flirts with wild yeast in the air until a close friendship is formed. I am no sourdough expert, but a dear Lithuanian friend (the very personification of one who bakes with love) kindly introduced me to her starter, fermenting in a glass jar with holes pierced through the lid. It gave off an intimidatingly alive impression, peering disdainfully up at me through the bubble holes in its surface. Mind you, it wasn’t aggressive like kombucha, a fermented hipster cure-all tea concoction sometimes mentioned in the same breath as sourdough. If you’ve had the dubious pleasure, you’ll know kombucha has a way of fixing you with its glittering eye and emitting a kind of repulsive determination to multiply its horrible scobies — self-replicating lumps of bacteria and yeast that look like congealed fat — until you panic and make over the deed of your home to it. Do not underestimate kombucha scobies. They are seriously tough, so indestructible that people make faux leather out of them. My personal belief is that they ought to be added to the Litany of the Saints in between ‘From the scourge of earthquakes’ and ‘From plague, famine and war’: From the turf-grabbing, home-snatching ways of kombucha, O Lord, deliver us…

But sourdough starter, though a bit of an independent diva, doesn’t possess kombucha’s thirst for world domination. It is a domestic, if ebullient, creature, easily quelled by the cool temperatures of the refrigerator and decidedly high-maintenance: if you don’t give it regular feedings of flour and water, the yeast will die and that’ll be the end of it. When you’re ready to make the dough, you use only a portion of the starter; a good starter will last you for years and years.

The second great challenge of sourdough is the timing. You’ll find, as you venture down the paths of sourdough glory, that it involves a goodish bit of dolce far niente in between sporadic bouts of activity. The dough takes a long time to ferment and rise — six hours, or overnight; it depends on the starter’s mood and the temperature and the content of the dough and many other variables subject to the eager scrutiny of the scientific sourdough community. It’s a good time, therefore, for an extended nap in the sun. If you’re of a more intellectual bent, you might like to pick up War and Peace or perhaps the classic Ol’ Paul the Mighty Logger by Glen Rounds, which chronicles how the American legend Paul Bunyan built the Rocky Mountains by pouring hyperactive sourdough into prairie dog burrows from Alaska to Albuquerque, using a specially designed cookshack on runners with holes cut in the floor so his team of cooks could fill the burrows on the go. A backup crew followed, capping the burrows off with chunks of wood. Once all that subterranean sourdough got bubbling, the tectonic plates couldn’t withstand the pressure, and overnight the Rockies had burgeoned forth. True story, as is proven by the ongoing seismic activity along the San Andreas Fault.

After the dough’s first sedately glorious rise (there are parallels with Louis XIV’s), it’s time to shape the loaves and let them rise again. Depending on the equipment available and the level of seriousness with which you have approached this process, this may well take place in charming wicker proofing baskets and involve your oven’s proofing setting. When you’re ready to bake, you must cut your baker’s mark into the top of the loaf. My Lithuanian friend cuts a cross, which is at once traditional and emblematic of the metaphysical importance of bread — symbolizing as it does all human sustenance, both physical and spiritual, and simultaneously the fruit of laborious sacrifice and the medium of love. (According to a still-surviving French tradition, it is wrong to throw away old bread. It can be fed to birds or animals, but not thrown in the garbage like other waste, because it is sacred.)

As the bread bakes, the kitchen will begin to smell delicious — but patience. After it comes out of the oven it must cool for a couple more hours lest it become gummy when you cut it. And then comes the moment of truth. Did you bake this bread with love?

If you baked it with love, O Silicon Valley foodie, there’s a factor you can’t program into your spreadsheet. If you loved the starter, or loved the dough, or loved the people you baked for — even if there was a spark of disinterest in your temperature-taking and your scheduling and your dutch-ovening — you’ve introduced an uncodably human wild card into the works. Love — self-sacrifice — such feelings are rewarded even on the scale of a sourdough recipe. It’s as the underrated 20th-century poet Roy Campbell sings in a vivid little gem of a sonnet: after a hard night’s work fishing the Mediterranean for the people he loves, his young children meet him on the quay at dawn bearing food. ‘Never was wine so red or bread so white.’