A vacation in a hell of a state 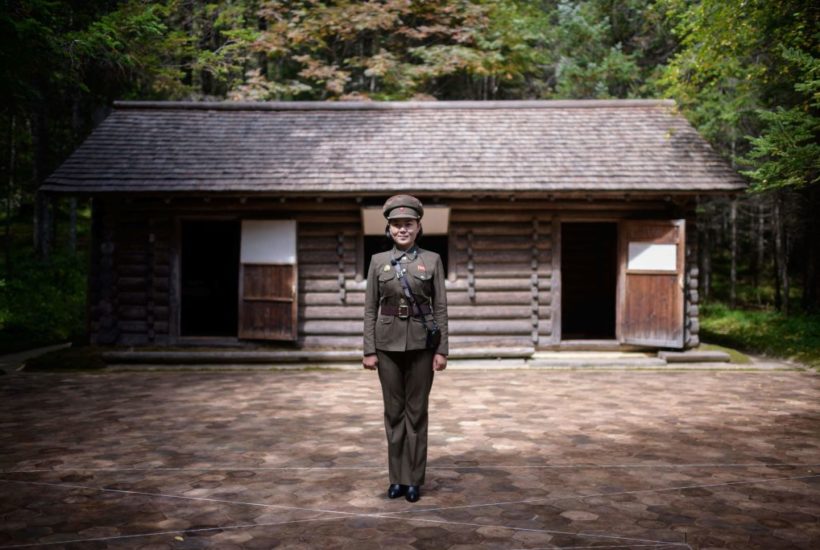 Guide Kim Un Sim (23) posing for a portrait before a replica of a cabin said to be used by Kim Il Sung at the 'Secret Camp, said to be the birthplace of late North Korean leader Kim Jong-il

Michael Palin in North Korea was a two-part 2018 documentary on the Monty Python actor’s tightly choreographed tour of North Korea. Palin dances with cheerfully drunk North Koreans on International Workers’ Day and picnics with his guide, a woman called So Hyang.

He plays catch with an inflatable globe with some North Korean children and learns some taekwondo. He sees some beautiful scenery — mountains and rivers, cities comprised of coordinated colorful blocks with monuments dedicated to the Great Leaders (as the past and present dictators are collectively called), and some sinister scenery, including a road lined with huge concrete pillars that can be knocked into the road, should the South Koreans invade. This book is Palin’s journal of the trip. Though evidently very edited, it reads nothing like a diary.

In the documentary, Palin describes his aim to meet — to truly meet — ordinary North Koreans and show that ‘people (no matter their background) are much closer to us than we think’. This is ambitious, as Palin’s trip has been planned by a travel agency that arranges government-approved visits to closed-off North Korea. Palin is chaperoned by two guides and a ‘gaggle of officials’ who, as becomes apparent in the book, carefully monitor the filming. When Palin’s team prepare to film anti-American cards and posters in a gift shop, the officials quickly clear the cards away, leaving only cards of the Great Leaders. In another shot of Palin and a farmer working in the fields, the same officials hurriedly arrange for a tractor to be brought onto the field, to show North Korea’s modernity to western viewers.

Palin candidly admits in the Journal that there is something missing in his trip: ‘They’ve been playing a game with us. We have been indulged, but never fully informed.’ He recognizes that the North Korea he is shown is mostly fake, but his desire to find something good overrides his realism. ‘Is this a show school? Undoubtedly,’ he writes after visiting a school. And then, as though grappling for something positive to take away, he adds, ‘But… even if just one school in Pyongyang is equipped like this, it’s impressive.’

His Journal includes some lovely anecdotes. The crew’s minders and guides organize a 75th birthday party for Palin, complete with cake, balloons, singing and drinking. So Hyang, wearing her ‘black business suit’, draws a birthday greeting in the sand on a beach with her heel — a giant heart with ‘Michael’ inside. Waiting for a plane, she laughs loudly when the production team show her Monty Python’s Fish Slapping Dance. ‘Friendships grew,’ Palin writes. And yet, for all of this, he doesn’t make us feel we know the North Koreans.

Palin’s writing is dull and lacks the vigor of his presenting. It isn’t evocative or inspiring, as writing must be when describing so isolated a place. The documentary, which shows scenes of rejoicing, dancing and eating, achieves all of this. It makes a big difference to see a smiling face, rather than to have it plainly described.

Palin dedicates little time to investigating or searching for the truth. In the book, he does question the Great Leaders’ connection to Mount Paektu, the mountain near which the first leader was said to have led the Korean army during the Japanese occupation. But, bizarrely, he doesn’t question why the people around him seem so happy, or what makes the silence that he interprets as peace. ‘This feels like… a relaxed town,’ he writes of Kaesong as Walter Duranty once wrote of the Soviet Union. ‘It’s spring, the trees are in blossom, the place is well kept. The people seem happy.’ Palin confirmed this misplaced optimism at the Edinburgh Book Festival after his return: ‘[North Korea is] very serene and peaceful. Pyongyang is a wonderful city. It’s very quiet, there’s no traffic or advertising. I’d love to go back.’

Everything about North Korea Journal and the documentary it supplements is summed up in Palin’s appreciation of the silence of Pyongyang: the lack of sirens, traffic, people, shouting and speech. I can understand it to a degree: a calm, silent city sounds like a dream. But the silence isn’t a reflection of the people of North Korea. It’s a reflection of the oppression they live under. It is a sinister silence that speaks of fear and a lack of freedom and basic human rights. This book is little more than an inadvertent tourist guide to a state no one would want to live in.