In just a few hours, this woman had effectively become a political Rorschach test 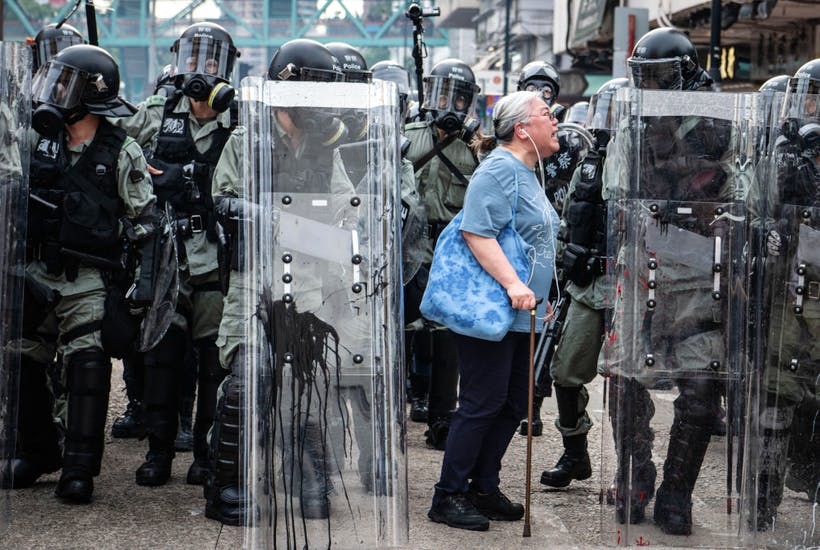 The elderly lady’s face is red with rage as she screams with all her might at police. Leaning firmly on her walking stick, her head doesn’t even clear the top of their riot shields. Her gray hair tied back in a ponytail, her worn T-shirt is in bitter contrast with the army green and black donned by officers in full riot gear.

I took her photo at a march attended by tens of thousands in the Hong Kong neighborhood of Yuen Long. A short time later, protesters were dispersed by the authorities. The picture went viral the next day. For those who supported the demonstrations, this woman inadvertently became a symbol of resistance against the Hong Kong government. Badiucao, a popular Chinese pro-democracy artist, later used my image to create a series of political memes criticizing the Hong Kong and Chinese governments.

But the negative comments soon followed: ‘This is how fake news are created and spread!’ one person commented on my Instagram, pointing out that videos showed she was yelling at protesters, not the police. One called it ‘disgusting’, suggesting the photo was ‘inaccurate’; another said I was ‘twisting reality’.

The editor-in-chief of Chinese state-owned newspaper Global Times posted the video of her telling protesters to leave on Chinese social media, commenting that the opposition used a picture of her talking to the police – presumably referring to my photograph – to spread ‘fake propaganda’.

Hong Kong demonstrators compared an old lady to tankman, filming her confronting the police. But here is another segment of the video of her blocking the demonstrators. Obviously she and many Hong Kong people don't want to see escalation of the violence. pic.twitter.com/xlOflDkcwJ

Another user shared this post, saying that ‘rioters pushed her to the police’s side, then took her photo to make it look like she’s berating policemen’. A video published by China Daily, an English-language state-owned newspaper, showed an article that featured my photograph and said it was an attempt to ‘distort’ the truth.

In just a few hours, this woman had effectively become a political Rorschach test: armed with the same available facts, people drew the conclusions they wanted, dismissing anything counter to their belief as ‘fake news’.

With the demonstrations against a proposed extradition bill which would allow suspects to be sent to mainland China now stretching into their eighth week, it is becoming harder to see how the situation in Hong Kong can be resolved. Hong Kongers have taken sides with either the authorities or the protesters. Misinformation is widespread. And distrust of journalists has never seemed higher: people simply believe what they want to believe.

Anger has mounted over the excessive use of force by the police, with tear gas, rubber bullets, and baton beatings all used against demonstrators. Amnesty International has condemned the Hong Kong police force several times, saying that ‘such a heavy-handed response now appears the modus operandi’.

Public trust in the police is broken. On July 21, dozens of masked thugs wearing white and armed with sticks ambushed a metro station in the suburban neighborhood of Yuen Long. They viciously beat passengers, protesters and journalists. But officers were nowhere to be seen. When they did arrive, it was too late: the group of suspected triads were long gone. Pro-democracy lawmaker Ray Chan spoke for many when he wrote: ‘Hong Kong has one of the world’s highest cop to population ratio. Where were @hkpoliceforce?’

But ire has grown towards the protesters, too. On July 1 – the 22nd anniversary of the handover of the former British colony back to China – masked demonstrators broke into the legislature and ransacked the building; again, the police were apparently nowhere to be seen. For many, that was a turning point: the protesters, they thought, had gone too far.

Those sympathetic to the police have continued to focus on protester violence. One young man was arrested for allegedly biting an officer’s finger off. A lawmaker’s parents’ graves were vandalized. In recent days, police accused protesters of attacking officers ‘with lethal weapons such as bricks and sharpened iron rods’.

In a show of support, multiple pro-police rallies have been held in Hong Kong, reflecting to some extent a generational divide that was also seen during the earlier 2014 pro-democracy Umbrella Movement.

The police themselves have made it clear that it’s now personal to them, contributing to the vitriol. In response to the grave vandalism, a police group called the perpetrators ‘cockroaches’. When Hong Kong’s number two official Matthew Cheung said sorry for the police’s handling of the Yuen Long attacks, police associations were left outraged: why had he apologized when, some insisted, officers had done nothing wrong?

It seems that in Hong Kong, the truth has become malleable – even when people are faced with the same evidence.

Soon after I took the photo of the woman, the police used tear gas and rubber bullets in what would later be called an ‘attack on protesters’ by Amnesty International.

I don’t know what the gray-haired lady was thinking exactly when she screamed herself hoarse at both sides. But I do think there is one thing that she and the rest of Hong Kong could agree on in the middle of the greatest political crisis the city has seen since 1997: we all want an end to the violence, even when there seems to be no end in sight – especially as the divides deepen.

Laurel Chor is a journalist based in Hong Kong. This article was originally published on The Spectator‘s UK website.