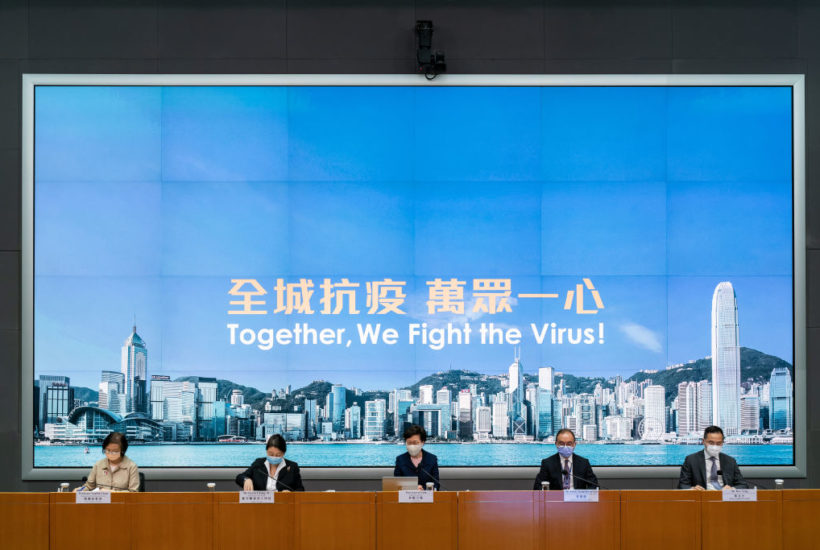 The national security law in Hong Kong has been passed for just over a month, but the scope of Beijing’s plans are now clear. This is a constitutional coup. The safeguards which have historically defended human rights in Hong Kong have been shattered. Rule of law has been replaced with rule by law — and the Communist party’s word is law.

Thursday July 30 brought home the reality of the new status quo. Hong Kongers woke up to the news that four young people aged between 16 and 21 years old — representing a small group of students who campaigned for Hong Kong independence last year — heard a midnight knock on the door and were arrested. Their crime? Posting on social media, or ‘organizing and inciting secession’ in the new dystopian Hong Kong. This carries up to 10 years in jail.

Later in the day, 12 democratic election candidates were then disqualified from standing. Among them were some of the most moderate names in the pro-democracy camp, including barristers like Dennis Kwok, who represents the Hong Kong legal community. It appears that the entire pro-democracy camp will be disqualified. The majority of people in Hong Kong support democrats. This has consistently been seen at elections — notably at the landslide District Council elections in November. As a result, Hong Kongers are becoming permanently disenfranchised.

The Chinese purge is not limited to politics. Benny Tai, a notable legal academic, has been fired from Hong Kong University for his involvement in protests. Libraries have been screened, and books placed under review. Banks have started scrutinizing their clients for pro-democracy ties. Businesses are being told that pro-protest posters violate the National Security Law. Technology firms face being forced to hand data over to the Hong Kong police.

Welcome to authoritarian Hong Kong. A city where the Hong Kong government issues a press release which says that ‘expressing an objection (to the enactment of the National Security Law)’ is unconstitutional, while insisting that ‘the HKSAR Government respects and safeguards the lawful rights of Hong Kong people, including the right to vote and the right to stand for elections.’

For Hong Kongers, this confirms their worst fears. Many will now be looking at their options: some will stay and continue to stand for freedom in the city they love, others will be looking for a way out. The path is costly for both groups. Britain must be ready to welcome Hong Kongers who decide to seek a way out. While the UK government has offered three million Hong Kong residents a path to citizenship, visa fees proposed by the Home Office are exorbitant and should be removed.

On Thursday the Chinese Ambassador threatened to ‘not recognize’ British National Overseas passports, and potentially bar people from leaving. This threat makes little sense in practice. To stop emigration, China would essentially have to put a travel ban on Hong Kong, as most Hong Kongers hold multiple travel documents. While this seems highly improbable, we must stand ready to support BN(O)s if China does decide to attempt this drastic course of action.

The British government has rightly taken a strong stance on passports but they must continue to press China in other areas. These latest incidents are another serious violation of the Sino-British Joint Declaration. Sanctions should now be seriously considered, as should further action with allies to reduce Britain’s strategic dependency on China. People are waking up to the systematic assault on freedom in Hong Kong and Xinjiang. The UK must respond proportionately.