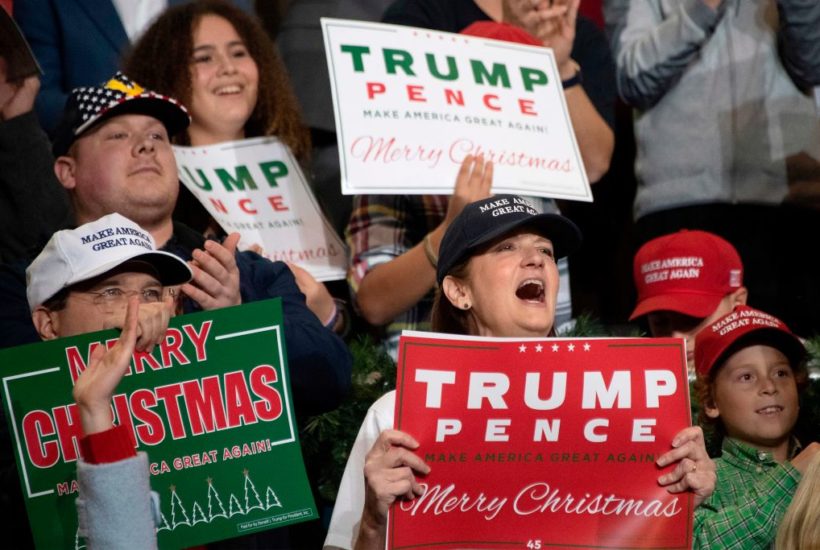 An English friend of mine once asked me what Francis Fukuyama was like, knowing that I knew him. ‘Well, he’s simply an American,’ I answered. My English friend smiled at me as if to say, ‘How silly.’ Because Fukuyama was of Japanese origin, you see.

They don’t really understand us, the Europeans. And Stephen Davies is no exception. His essay might, for all I know, be an accurate summary of modern European politics, but he simply doesn’t understand the 2016 American election. How could he, when he tries to compare the Trump movement to right wing movements in Europe? Whatever is happening in Germany, Italy, and Hungary has nothing whatever to do with America.

Between the nationalists of the continent and America there’s a gulf as deep as the Atlantic Ocean.

That’s because the American variant is a liberal nationalism based on the sacred texts of our founding. The focal point for nationalist and patriotic sentiments in America is the sense that we have a special mission to promote liberty, as promised by the Declaration of Independence and guaranteed by the Bill of Rights. These have assumed the status of what historian Pauline Maier called ‘American Scripture.’

Our constitutional liberties are the icon of American nationhood and constitutive of our identities as Americans. For Americans, as Americans, illiberalism is self-defeating, and if some Americans (including Trump) have been illiberal, in time they’ve been seen to be un-American.

Left-wingers and Europeans are quick to detect the whiff of fascism in American nationalism. It doesn’t take a history degree to recognize how hysterical this is, but if historical perspective were needed, Jean-François Revel provided it when he observed that, while the dark night of fascism is always said to be descending in America, somehow it lands only in Europe.

Libertarian readers of this journal cannot be nationalists, of course. Like religion, nationalism carries with it too much baggage. Nationalism promotes solidarity, the sense of attachment to and sympathy with others that is one of the most basic of human goods. It will pull one leftward on economics, since it asks one to support social welfare programs for fellow-citizens. Not aliens, mind you. The nationalist will distinguish between aliens and citizens, but what he’d deny the former must be paid for by what he’d give the latter. Otherwise the pose of nationalism is a pious fraud. That’s why a libertarian who objects to social welfare nets cannot be a nationalist.

Nationalism has too often been dismissed as retrograde, by a New Class largely indifferent to both natives and aliens. But if we thought that nationalism provided the single touchstone of political morality, we’d make a like mistake. If you’re a jusqu’au bout nationalist, here are some things you’re not fond of: humanity, the West, Christianity in general, and Catholicism in particular. Nationalism is not enough.

The final error in Davies’s paper is his failure to understand the economic reasons for the Trump victory. People on the left and too many libertarians assume that it represents a rejection of traditional free market Republican principles. Indeed, Trump explicitly rejected the green eye-shade Republicanism that objected to the 1962 Kennedy tax cuts, as well as the hostility to welfare programs. At the same time, however, he identified the barriers to free markets that made us an immobile class society.

In 2012 Americans told pollsters they no longer thought that their children would have it as good as they did. That was the American Dream, but it had died, or else had fled to more mobile countries such as Denmark and Canada. The Republican virtuecrat blamed the Oxycontin snorting spawn of unwed mothers. The libertarian said it was a consequence of a worldwide move to an information economy—without explaining how the Denmarks and Canadas had somehow avoided this. The liberals told us it could all be fixed by educating the coal miners to become software engineers.

They hadn’t a clue.

What had made us immobile were all the things which the libertarian rightly rejects. The most obvious of these is a broken educational system. Our Third World K-12 public schools perform poorly relative to the rest of the First World. As for our universities, they’re great fun for the kids, but many students emerge on graduation no better educated than when they first walked in the classroom door. What should be an elevator to the upper class is stalled on the ground floor. Part of the fault for this may be laid at the feet of the system’s entrenched interests: the teachers’ unions and the professoriate of higher education. Our schools and universities are like the old Soviet department stores whose mission was to serve the interests of the sales clerks and not the customers. Why the sales clerks should want to keep things that way is perfectly understandable. The question, however, is why this is permitted to continue, why reform efforts meet with such opposition, especially from America’s elites. The answer is that aristocracy is America’s default position. For our elites, the New Class that stands at America’s commanding heights, social and income mobility is precisely what must be opposed, and a broken educational system wonderfully serves the purpose.

America prides itself on being the country of immigrants. There’s a bit of puffery in this, since there’s a higher percent of foreign-born residents in Australia and Canada, and America ranks only a little ahead of Great Britain and France. Still, the country historically has been the principal haven for waves of immigrants (not to mention the 15 percent of people whose ancestors were already here as Native Americans or who were brought here as slaves). Before the Immigration Reform Act of 1965, the new arrivals added immeasurably to the country’s economy and well-being. Since then, however, the quality of the America’s immigrant intake has declined, and we’ve imported immobility. We’re still admitting the stellar scientists of years gone by, but on average immigrants are less educated than they were in the past, or even than Americans are today (not the highest of bars). We’re also incurring the opportunity cost of a broken immigration system, in the high quality immigrants we don’t admit, and who either stay home or move to more immigrant-friendly countries. That burdens the country, but it’s very Heaven for an American aristocracy, which can hire cheap household labor without worrying about competition from high-skilled immigrants.

For those who seek to rise like the hero of a Horatio Alger novel, nothing is more important than the rule of law, the security of property rights, and sanctity of contract provided by a mature and efficient legal system. The alternative, contract law in the state of nature, is the old boy network composed of America’s aristocrats. They know each other, and their personal bonds supply the trust that is needed before deals can be done and promises can be relied on. We’re all made worse off when the rule of law is weak, when promises meant to be legally binding are imperfectly enforced by the courts, when a regulatory morass burdens entrepreneurs, but then the costs of this are borne disproportionately by those who begin without the benefit of an old boy network.

If we’ve become an aristocracy, then, it’s because of the artificial and unjust rules and institutions that keep people from rising, such as the broken schools and regulatory barriers that the New Class supports. They tell us that these can’t be changed, but that’s nothing more than a self-serving mythology. We had thought that magical thinking had been expelled by Max Weber’s disenchantment — entzauberung—but it’s still with us. So we are told to accept that which must never be accepted.

The narrative of a necessary and natural aristocracy was precisely what Trump rejected when he said we could make America great again. We could remove the barriers to mobility and in doing so America would thrive as never before. We could fix our schools, reform our immigration laws, drain a regulatory swamp, and return America to the country where we can believe that our children will have it better than we did.

That was the 2016 election, and since then we’ve begun the slow process of restoring the American Dream.

This article was originally published in Cato Unbound.