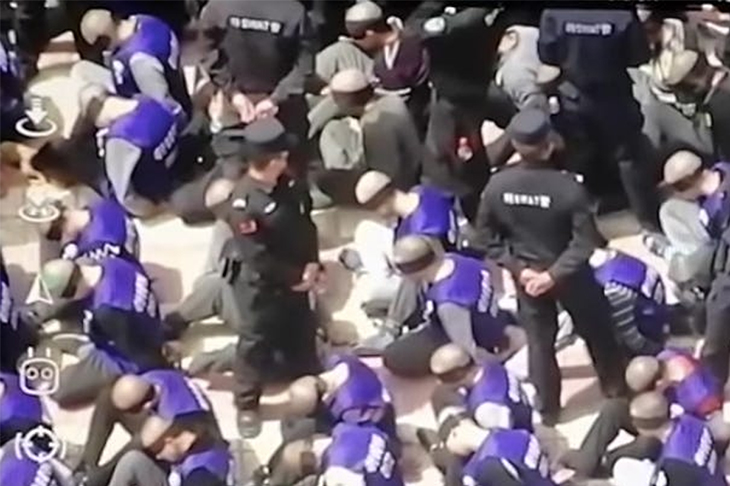 In 1944, Slovak rabbi Michael Dov Weissmandl sent the US government a 30-page report detailing an extermination facility in Poland where Jews were being murdered en masse. The document included maps pin-pointing the exact locations of gas chambers and crematoria. Rabbi Weissmandl pleaded: ‘We ask that the crematoria of Auschwitz be bombed from the air… Such bombing will delay the work of the German murderers.’ Franklin Roosevelt rejected the proposal.

FDR had no love for Jews but his decision was at least as much about practicalities and in these concerns he was not alone. Further calls came to bomb either the railroad tracks leading to Auschwitz or the gas chambers themselves, but such initiatives divided Jewish organizations. The Jewish Agency opposed airstrikes when it believed Auschwitz to be a labor camp but reversed its position upon learning the truth. Rabbi Weissmandl was later sent to Auschwitz himself, though he escaped the train en route, and he remained bitter about the failure to disrupt the Nazi death machine. How was it possible, he enquired, that, even as war destroyed transport infrastructure across Europe, the free world ‘did nothing about the lines transporting the Jews to the slaughter house’? His conclusion was unsparing: ‘The answer was that the Allies were not concerned about the fate of the Jews’.

The question we must confront today is whether we are concerned about the fate of the Uighurs. I don’t argue that China’s policy in Xinjiang is comparable to the systematic extirpation of half of European Jewry. I do, however, contend that the collective failure to prevent that genocide just eight decades ago should have installed an early warning system in the Western conscience. While it is difficult to ascertain the facts on the ground, the activities ascribed to the Chinese authorities appear to be at least genocide-adjacent. Resurfaced drone footage of Uyghurs marshaled onto trains spurs a horrifying déjà vu. Gruesome terms we thought left behind are suddenly with us again: ‘concentration camps’, ‘re-education’, ‘sterilization’. Even if ‘it’ is not happening again, something dreadful is.

There has to be a breaking point with China, a boundary that even our addiction to government debt and cheap electronics cannot permit to be breached. If mass repression of a minority cultural and religious group is not where the line lies, is there even a line?

Dominic Raab’s suspension of Britain’s extradition treaty with Hong Kong is encouraging, as is his description of the treatment of the Uighurs as ‘gross human rights abuses’. A few months back, I suggested some sanctions to punish China for its bad faith and obstructionism over COVID-19, among them canceling the Huawei deal, Magnitsky-style repercussions for senior CCP figures, recognizing Taiwan, offering British citizenship to Hong Kongers, and championing the Uighurs. As a liberal, I’m accustomed to being on the losing side of arguments and the fact the UK government has adopted most of these measures in some form prompts an uncanny though not unpleasant feeling.

On the plight of the Uighurs, however, there have been words and little else. That must change. When it comes to China, Britain’s national interests and its responsibility to protect now coincide, which requires the country to step up sanctions against the communist dictatorship.

These measures would mark a serious escalation and bring with them diplomatic and economic retribution but even sustained blowback would be worth it to disentangle Britain from this autocracy. The Uighurs are not the first to be crushed under the rolling authoritarianism of this brute state and they won’t be the last. While China represses its own citizens and causes the deaths of thousands of the West’s, we continue to retail the old saw about how trade will bring democracy and human rights. It is a lie, we know it is a lie, but it is a lie of convenience, a soothing legend that makes it easier for liberal and democratic heads to sink into pillows at night, untroubled by collusion with a regime that disregards basic principles of liberalism and democracy, to say nothing of human decency.

We are not at war with China as the Allies were with Germany in 1944, and nor am I counseling that we should be. But Britain has the firepower of diplomatic and economic sanctions and it should be using them in defense of the Uighurs. There are only so many times we can tearily pledge ‘never again’ while commemorating the latest grisly toll of our indifference. Bomb the railroad tracks.