White Christmas: the magic of the festive drugs binge

Among partying druggies, the trust that has disappeared from every level of society is fully present 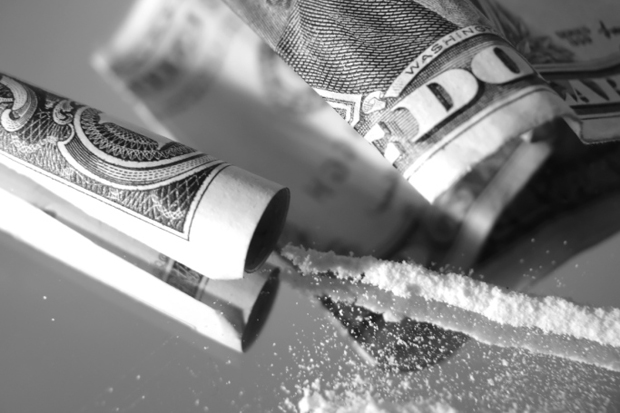 An effective antidote to all this thoughtless zealotry, I find, is to go out for the evening with my friend Trevor. When despair hits total, I know it’s time to ring him up and suggest a small sherry: code for drinking and taking drugs until we’re totally out of our minds, then partying all night.

Trevor is a big, strong, hard-working country boy for whom life is invariably a momentous affair. Though he’s a tolerant man, there is a point at which forbearance ceases to be a virtue, and he is an old-school puncher and the man you have to beat if you want the magnetic title of Hardest Man in Town. His catchphrase is ‘Who’s the Daddy?’ It is not unknown for him to beat his chest like a silverback gorilla while screaming this phrase at a room. He is my Chief and I love him.

Trevor is always available for a binge with me because he does it every weekend anyway, regardless of the political climate, and because I sometimes used to write about him in The Spectator. He can’t read or write and he has never heard of James Boswell. Nevertheless that is the kind of obsessive idiot he sees me as. He views himself as an immensely worthwhile subject. I agree.

‘I’ve not been well lately,’ he said the last time I rang him in despair to arrange another ruination. ‘Pray tell,’ I said. ‘I went to the doctor. I said, “Doctor, my penis is burning,” and she said, “That means someone is talking about it.”’ Then the explosion of contrived laughter and the abrupt termination of the conversation and slamming down of the phone by a busy man.

We arranged to meet in the Turk’s Head. Such a boring pub it is, full of pseudo-intellectuals who smoke dope in the beer garden. (Trevor is contemptuous of cannabis smokers.) We had a couple of quick ones before moving on. He had two grams of coke in his pocket and sold me one for £100 ($130). I took it into the bathroom cubicle for a trial line. It wasn’t bad coke but nowhere near a gram.

As I came out of the cubicle four of these pseudo-intellectuals were standing in a line pissing into the trough. I reopened the little plastic bag and indignantly showed them what was supposed to be a gram minus a line. They craned at it over their shoulders. ‘That’s never a gram,’ opined an expert. ‘Half, more like.’ Another man came in. This was the pub landlord. ‘That’s a Trevor gram, that’s what that is,’ he said knowledgeably. But at that instant the full effect of the coke took hold and quibbling about metric fractions seemed absurd.

We had a couple more drinks and lines in the World’s End then moved down to the Bunch of Grapes. Here we settled in and had roughly another 10 drinks, now and again popping into the bathroom for a top-up. Going out on a Saturday night booze-up with Trevor is like going out with a gregarious pitprop. While my mind disintegrates, his integrates and becomes more solid. His speech doesn’t change, nor does its content, nor does his gait, demeanor or facial expression. I admire this strength and unity of character tremendously. Sometimes I fantasize that if I went out for a drink-and-drug binge with notoriously sober Mr Donald Trump (with whom my Chief shares many sterling characteristics), he wouldn’t change either.

Trevor walks into a room: the party starts. He is wildly popular, especially with ladies of every age and social class, and reverential young tearaway bucks, awed by the calmness of his devastating punching, humbly approach the throne for a blessing. Yet there came a point in this particular evening when I was diminished to just my head, and for a moment I found that it was near to his head (which was resting against the shoulder and neck of a woman with her back to me), and he said quietly and seriously to me, ‘I’m fucking wasted.’ Then he closed his eyes and bit lovingly into the woman’s neck.

This confession of his weakened state surprised me. Thankfully that was the end of the matter and we heard no more about it. If anything, the drinking pace increased as closing time approached. When we couldn’t buy any more drinks from the bar, he led me through the Devonshire market town to a domestic front door with a dolphin-shaped door knocker, with which he beat such an exuberant tattoo it came off in his hand. The door swung open. We were confronted by this fat guy crouching in the passage performing a version of the Maori haka dance. This boded well. Trevor placed a palm over the contorted face and tipped him over, turtle-like, onto his back and we passed over him to the tiny kitchen.

I enjoy an after-pub drugs party almost as much as I do the pub. The music will be great; solitary, solipsistic dancing, which I enjoy, is absolutely fine; you can come as you are. And among partying druggies, the kind of social trust that has disappeared suddenly from every level of society is not only fully present, but in its ancient, mystical form.

Trevor had quickly taken possession of the circulating pipe loaded with washed coke. Passing it on to me, he said, in the voice of a man who had been suspended from a gibbet for a few seconds then cut down: ‘Here you go, dude.’ I was old, I was drunk, I was wearing a Harris Tweed jacket with a war-remembrance poppy in the lapel. I sucked so hard on the drinking straw decorated with a Christmas holly design that I temporarily broke the apparatus. After a momentary indecision, those training beady eyes on the pipe’s progress decided, perhaps by a telepathic poll, that I was a funny guy. They laughed and laughed and I was now accepted without reservation into the magic circle. ‘Fucking writer,’ said Trevor, jerking a thumb at me and rolling his eyes at them. I was still holding the precious smoke in, but acknowledged the piquancy of the calumny by bulging my eyeballs.

Now a lovely young maiden, perhaps naively in thrall to the idea of a ‘writer’, stepped forward lightly as a moth to interrogate me. ‘So what do you write?’ she said sweetly. I exhaled. ‘At the moment,’ I said, ‘I’m writing an essay called “In Defense of Iago.”’ Sage, supportive or uncomprehending nods from the pipe followers. ‘And he writes about me, because…’ Here I think my Chief had became a little jealous of this Iago chap because he did that mental thing where he beats his chest and screams at the room, ‘WHO’S THE DADDY?’