Why I will wear a face mask

This is where the crux of the COVID debate rests: the individual vs society 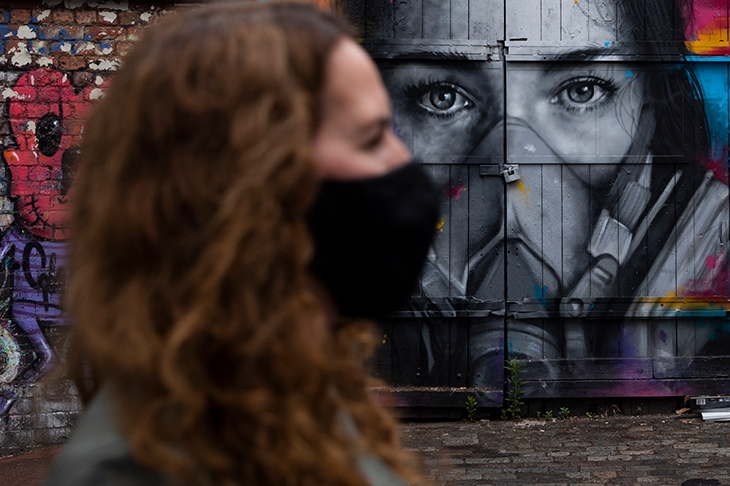 We are enjoined by certain experts to wear face masks while having sexual intercourse. No change there, then, for me. It’s the only way I’m allowed it. I don’t even get to choose my own mask. My wife keeps several in a cupboard under the stairs. If, when I retire to bed, I see the face of Benito Mussolini or Douglas Murray neatly laid out on my pillow — or, for more exotic excursions, the late President Sirimavo Bandaranaike of Ceylon — I know that fun times are ahead.

This usually happens twice a year — on my birthday and on Walpurgisnacht. I don’t know if these largely latex creations protect either me or the recipient of my labored exertions from COVID. Perhaps they do, perhaps they don’t. They certainly wouldn’t protect me from any of the other vile diseases associated with sins of the flesh (were my partner not chaste and pristine in this regard, obvs). You can wear the most expensive, hygienic face mask in the world and over the top of that a mask of Pope Francis, but if you are executing your courtship with Shania from telesales by the dumpster out the back of the local KFC, it won’t stop you catching a dose of something far more malevolent than this arguably over-promoted virus.

The mask business has caused a rift in our household just as it seems to have caused a rift within the UK government. Michael Gove was seen out and about, maskless, exhaling his gamey Aberdonian breath over all and sundry, while the official regulations state that if you don’t wear a mask in a shop you will soon be fined a ton. Michael apparently disagrees with all this. There is the suspicion among many that these masks have become a sort of fetish and that even when COVID has disappeared we will still be required to wear them. The stats will one day show that our increased interest in hygiene these past few months has saved X number of lives regardless of COVID and masks will therefore be here to stay.

That’s the argument, leastways, along with a partly understandable suspicion about the efficacy of these things — as much use, some argue, as a nosegay of marjoram was against the bubonic plague. This seems to me silly. It is true that the early advice regarding masks was that they were scarcely necessary and in any case did not remotely protect the wearer. But my suspicion is that all the early scientific advice we received was flawed, or incomplete, much as is — quite probably — the advice we are given today. Science is not, as the mass media seems to believe, certain. It is a collection of competing hypotheses. And scientists are not wholly objective — they are tied to their various paradigms and terribly reluctant to give them up even when compelling evidence shows them to be bunk. There are still physicists clinging, ever more despondently, to Niels Bohr and Werner Heisenberg’s ‘Copenhagen interpretation’, regarding weird behavior in the quantum world, almost 100 years after it was formulated and despite its inherent absurdities and contradictions.

The science now with this new thing, COVID, is all over the place, and has been from day one. There are those who will insist that wearing a face mask actually increases the risk to the wearer because he will keep touching his face and so on — but they are a minority and miss the point, because the purpose of the masks is to protect everybody else. And that’s where the crux of the COVID debate rests: the individual vs society. There seems to me more than sufficient evidence that while wearing a face mask does not entirely eliminate the risk of spreading the virus, it reduces it. We can argue about how much, but surely that is certain. And so, I will wear a face mask. Not just for sexual intercourse.

The mask/no-mask stuff really does lie at the heart of the COVID debate and has estranged me a little from readers who more usually are on my side. I have just written a chapter for a new book a called Pandemic: Where Did We Go Wrong? My contention is that for partly these no-mask ideological reasons Britain’s government was disinclined to take the virus seriously enough from the beginning. It thought the thing over-hyped, perhaps ephemeral. It resisted, viscerally, the implication that big government was needed to impinge on individuals — and the economy — in order to preserve the lives of those vulnerable to COVID’s assault. And so we were slow in testing, desperately slow in closing our borders, slow to lock down, slow to provide frontline staff with personal protective equipment. As a consequence, the COVID stats do not show the UK in a terribly good light. We have lost, I think, many more people than should have been the case.

I do not think that Boris and co. have been incompetent, in the main. I think they were possessed of an unconscious belief that this pandemic had been over-rated by supranational institutions, such as the World Health Organization, that it was an over-stated concern. I think that in those early days — February into March — this guided the policy. My rebuttal to this mindset would be to insist that a government’s primary concern is to protect its population and that the UK’s was unaccountably tardy in so doing.

The counter-argument — the no-mask argument — would have to insist that almost the entire world got it completely wrong, over-reacted, wrecked economies for no good reason. Every government, every scientific organization of note, all of them got it wrong: only we were right. That is a stretch too far for me, I’m afraid. It seems a position similar to those who argue that 9/11 didn’t happen, or was an inside job, or that the moon landings were fake. When you have flawed politicians and flawed science, you go with the wisdom of crowds, surely.