The woke war on religion 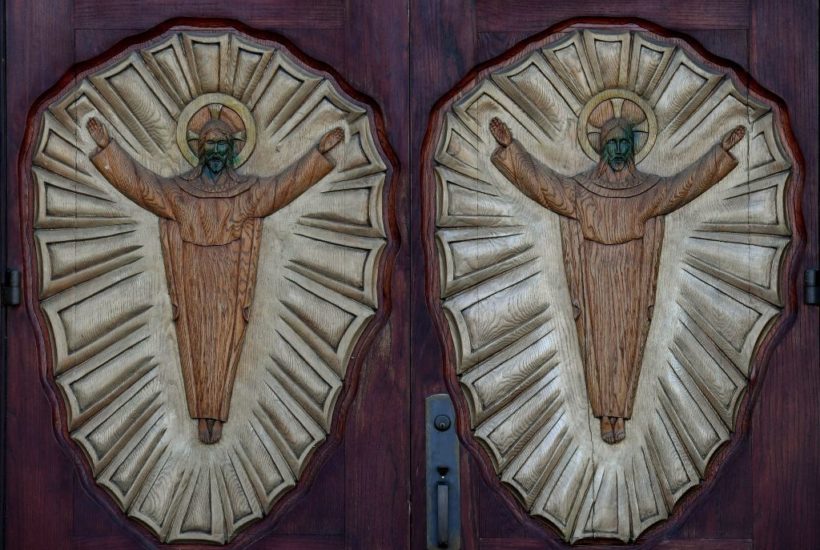 Though you wouldn’t know it from most American media outlets, the phenomenon of vandalizing and burning religious sites which is accelerating in Europe has, like a virus, jumped an ocean and is now among us.

Over the past month, statues of Christ and the Virgin Mary have been damaged in states as far apart as Colorado, Missouri, New York, Tennessee, and Massachusetts. On July 11, a vehicle was driven into a Catholic church in Florida with the clear intent of burning the building to the ground while congregants were inside.

But it’s not just Catholic symbols and edifices being targeted. America’s Jewish community has received similar treatment. During protests in late-May, for example, anti-Israel slogans were daubed on the Congregation Beth Israel synagogue in Los Angeles’s Fairfax district. Several kosher stores were also vandalized and smeared with anti-Semitic slurs. That same month, Congregation Beth Ahabah, which has been in Richmond, Virginia, for over 200 years was vandalized during protests.

This comes against a background of 2019 as a year, according to the Anti-Defamation League, in which more anti-Semitic incidents were recorded in America than any other year over the past four decades. These included violent attacks on a rabbi’s New York home, a California synagogue, and a Jewish grocery store in New Jersey.

From the United States’s beginning, Jews and Catholics have been among America’s greatest beneficiaries and contributors. Over time, the descendants of migrants from poverty-stricken parts of Eastern and Southern Europe, as well as the political and economic disarray of Latin America, have had the opportunity to rise to the highest places in the land.

Even today it is moving to read George Washington’s March 1790 letter ‘To Roman Catholics in America’, and even more moving to read his August 1790 letter ‘To the Hebrew Congregation in Newport, Rhode Island.’ In these texts, Washington stressed that these minorities — in an overwhelmingly Protestant America — enjoyed, in his words, ‘the liberty of conscience and immunities of citizenship’ and the same ‘inherent natural rights’ as everyone else. At the time, these were revolutionary statements.

That’s not to say that anti-Semitism (the oldest prejudice) and anti-Catholicism (the last acceptable prejudice) have disappeared from America — 2020 shows that this isn’t the case. The real question is: what is driving these latest attacks on religious symbols and edifices?

In many cases, the answer isn’t immediately obvious. As in Europe, the perpetrators’ motivations are often difficult to identify. In France, some have turned out to be anarchists, Islamists and radical feminists. Others are troubled adolescents, in a few instances, it has been drug-addicts not in control of their faculties.

One factor enabling what we are observing in Europe and America is a general breakdown in public order. This played a role in the uptick of attacks on religious buildings in France during the gilets jaunes protests in 2018 and 2019. When the police are fully occupied elsewhere — or think that their efforts to uphold public order are unsupported by elected officials — those intent on causing trouble know they have more scope to act without being caught, let alone punished. The protests and riots that have been sweeping much of America since June, combined with very public attacks on the police by the radical left, as well as the limp responses from left-leaning mayors and governors, have made it easier for those who want to engage in attacks on specific faiths to do so.

Many American attacks are, however, driven by very specific motives. Vandalism of Jewish sites is, for example, often all about anti-Israel sentiment. The drawing of satanic and anarchist images on the door of St Joseph’s Church in New Haven, Connecticut, on July 15 reflects Satanism and anarchism’s longstanding anti-Catholicism.

In other cases, the attacks reflect more general efforts by the woke left to force America to accept their version of history. This is most obvious in the case of Junípero Serra, an 18th-century Catholic saint who built missions throughout what was then the Province of Las Californias, New Spain. Throughout June and July, numerous statutes of Serra have been toppled and decapitated.

Some accuse the Franciscan missionary — canonized by Pope Francis in 2015 — of promoting the destruction of Native American cultures. Others note, however, that Serra protected Native Americans from the excesses of Spanish colonial officials and soldiers — even securing formal legal recognition of Native Americans living on mission territory as full subjects of the Spanish King and thus owed certain rights.

Rather than engaging in careful scholarly reflection and debate to explain history’s true complexities, the woke left prefer direct action. We saw this in the form of protests against Serra’s canonization in 2015. This was swiftly followed by vandalism of the San Carlos Borromeo de Carmelo Mission where the saint is buried, including the daubing of the words ‘Saint of Genocide’ on the church floor. Since then, there has been periodic vandalism of statues of Serra. The attacks on Serra effigies this year represent a stepping-up of this long-running campaign.

Violence in the pursuit of political ends is always designed to intimidate. And one goal of these attacks on Serra statues is to silence those who don’t ascribe to the perpetrators’ views. Such dissenters from the woke consensus about Serra include the Native American scholars who have written sympathetically about the missionary’s endeavors.

More widely, these assaults on Serra statues, as well as attempts to topple effigies of figures like Saint Louis IX — the 13th-century French king after whom St Louis, Missouri, is named, and who symbolizes France’s long historical involvement in North America — are part of something else: an effort by woke revisionists to portray America’s emergence as one long, uninterrupted history of oppression.

For such activists, the facts surrounding the lives of people like Louis IX aren’t open to discussion. Even to venture the opinion that history is much more complicated than the woke would have us believe is, from their standpoint, prima facie evidence of a ‘Eurocentric’ or ‘logocentric’ mindset — that’s how the woke roll.

Where this will all end is anyone’s guess. But whatever happens, these events should alert Americans to the fact that the woke left reject the American Founding’s embrace of religious liberty and toleration as one of the Republic’s core commitments. They will settle for nothing less than submission to their faith. To pretend otherwise would be deeply unwise.

Samuel Gregg is research director at the Acton Institute.