Words to rally and inspire: stirring speeches from Elizabeth I to the present

Speeches of Note: An Eclectic Collection of Orations Deserving of a Wider Audience by Shaun Usher reviewed 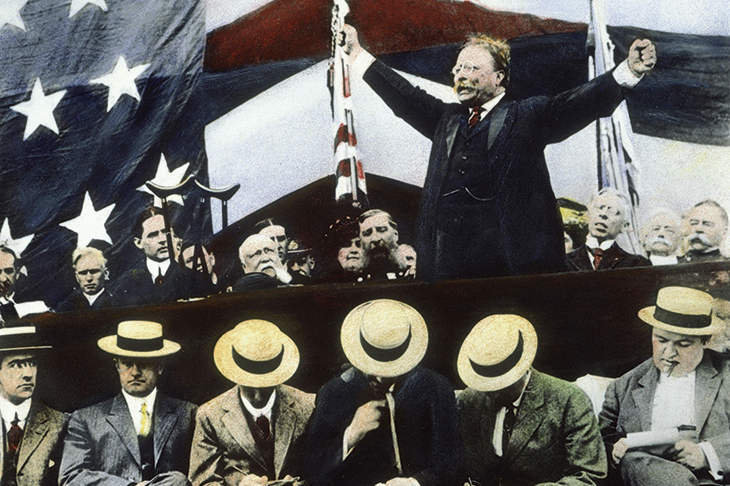 Speeches of Note: An Eclectic Collection of Orations Deserving of a Wider Audience Shaun Usher

It was a surprise, on reading Speeches of Note, to find myself laughing and chuckling at the speech of a Kentucky congressman of whom I’d never heard on a subject of little interest to the rest of the world. Yet it is such a gem of effective persuasion, brilliant construction and escalating hilarity that I happily went over it again.

The speaker was James Proctor Knott in 1871, opposing the use of federal land in his district for a new railroad that would terminate in the backwater of Duluth. He did so by means of an exaggerated and sarcastic description of the wonders of that little town. Duluth, he explained, was shown on a map provided for the debate,

[to be] situated halfway exactly between the latitudes of Paris and Venice, so that gentlemen who have inhaled the exhilarating airs of the one or basked in the golden sunlight of the other must see at a glance that Duluth must be a place of untold delights, a terrestrial paradise, fanned by the balmy zephyrs of an eternal spring, clothed in the gorgeous sheen of ever-blooming flowers, and vocal with the silver melody of nature’s choicest songsters

whereas in fact it was in a place ‘cold enough for at least nine months in the year to freeze the smoke-stack off a locomotive’.

Knott’s destruction of railroad legislation through an avalanche of ironic praise is one of many oratorical delights contained within this fascinating and well-presented volume. A book of speeches can easily be a stodgy and indigestible product, but Shaun Usher has put together a collection of many efforts that arouse emotion, mirth or wonder.

I found the most moving to be the speech of the 16-year-old Ryan White, a hemophiliac who contracted Aids from a blood transfusion, and was heartlessly ostracized by his school and community. He did not live to see 20, but left behind him remarks which are a lasting rebuke to ignorance and injustice.

The most extraordinary is from Theodore Roosevelt, who delivered a feisty performance on the stump in 1912 despite having been shot just moments before, the bullet lodging in his body but after being slowed by passing through the 50-page text of the speech in his jacket pocket. His sentence ‘the bullet is in me now, so that I cannot make a very long speech, but I will try my best’ is a reminder to all of us to see our irritations with sound systems or stage arrangements in true perspective. And the fact that this event neither prevented him speaking on the one hand, nor won him the election on the other, shows how people took things in their stride more assuredly a century ago.

There is much that is satisfying about this book. It does not confine itself to extracts of limited length on any assumption that readers have short attention spans: where speeches are a little extensive, such as that of Frederick Douglass — ‘What to the slave is the Fourth of July?’ — we get to enjoy them in full. It addresses art, science, music and creativity as well as politics. No previous book has led me to read Nick Cave’s celebrated lecture on ‘The Secret Life of the Love Song’. There is some fun and innovation, most notably by the inclusion of a commencement address at Long Island University by Kermit the Frog, although the idea evidently turned out to be better than the oration.

More thought-provoking is the scattering of speeches that were drafted but mercifully never delivered. They include the texts prepared for President Nixon to announce that the first men on the moon would be stranded there, and for the Queen to brace the nation for war with the Soviet Union. We are reminded of some wonderful and inspirational moments, such as when Nelson Mandela is sworn in and declares ‘Let freedom reign’. And we are entertained by Mark Twain explaining how he arrived at old age: ‘I have made it a rule never to smoke more than one cigar at a time.’

One of the speeches included is on ‘The Pleasure of Books’, delivered by a Yale professor in 1933 in response to Nazi book burnings. We can’t physically know the great people who are dead, he reminds us, or even most of the great ones living. ‘But in a private library you can at any moment converse with Socrates or Shakespeare or Carlyle or Dumas or Dickens or Shaw or Barrie or Galsworthy.’ This book has some of that quality, where we can find Nehru or Einstein or Victor Hugo or Robert Kennedy at their best, and contemplate their beliefs and ability to express them. There is no doubt that you can read it from cover to cover and enjoy it.

And yet something important is missing, at least to me. This collection is very largely a reminder of the most powerful arguments made for diversity, tolerance, freedom and justice. It reads as a compelling case for liberal democracy. That is uplifting, and ever more necessary as our own century progresses. But some of the greatest leaders and speechmakers who have saved or extended democracy have not made it into these pages, and one is left with the feeling that they were too conservative for the author’s taste.

If Dominique de Villepin’s far-sighted speech on Iraq in 2003, pointing out that there was an alternative to war, can be included, why do we not admire alongside it Churchill’s magnificent words in the 1930s arguing for an alternative to appeasement? If we can applaud Robert Kennedy’s vision of a united America, why do we not go on to hear Ronald Reagan in his eloquent advocacy of liberty? Democracy and diversity might not have made it into our century without some tough-minded leaders who resisted foreign tyrannies, and found the words to motivate their countrymen to stand with them.

Missing too is any eloquence that commemorated the sacrifices made for a free world by those who had to fight for it on a battlefield. We can read the exhortation of ‘La Pasionaria’ to Spaniards to fight against the fascists in 1936, but not a speech such as the one delivered by Reagan before the veterans of the Normandy landings 40 years on: ‘These are the men who took the cliffs. These are the champions who helped free a continent. These are the heroes who helped end a war.’

Such omissions do not prevent Speeches of Note from being a readable and enlightening book. Nor could any collection of speeches ever satisfy the preferences of every reader. But it would only have gained further weight and variety if its pages had been extended to modern leaders who practiced great oratory but nevertheless recognized that in the defense of our ideals, great words need to be backed by physical strength. Eloquence should be celebrated, but we should never forget that, all too often, it is not enough.