In this excerpt from his autobiography Signatures: Literary Encounters of a Lifetime, David Pryce-Jones meets the survivors of the 20th century 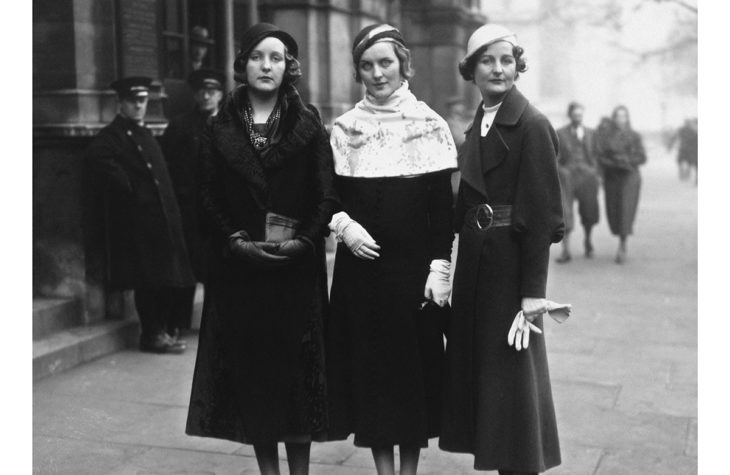 We are family: Unity, Diana and Nancy Mitford, 1932

Universal genius is a law unto itself, but the personalities presented in Signatures at least deserve to be remembered by generations yet unborn.

Researching for my book Paris in the Third Reich, I was just in time to catch some German officials or soldiers who had played a part in the occupation. Understandably, they tried to put themselves in the best possible light. Ernst Jünger was different. A staff officer, exceptionally intelligent and exceptionally observant, he kept a day-by-day record of his life in Paris. Much more than a timely self-portrait, these diaries fix for posterity the historic moment when the long-drawn contest for power in continental Europe appeared to have ended conclusively in German victory and French defeat.

After the war, Jünger was apparently in the habit of staying in Paris with a French lady. We arranged to meet at her address. He opened the front door and in spite of his 87 years led the way up several flights of stairs. Born in 1895, he appeared to be a holdover from the era of Kaiser Wilhelm and Bismarck. His soldiering began with an improbable spell in the French Foreign Legion, on the wrong side, so to speak. A German infantryman, he spent virtually all of World War One in the trenches on the Western Front. Wounded 14 times, he was the youngest soldier ever to win the Pour le Mérite, the Kaiser’s medal for bravery. I asked him how come he had been able actually to enjoy the war. His answer was simple: ‘Killing Frenchmen.’

Highly cultivated, Iris was an old-fashioned bluestocking engaged in matters of the mind. Edith Wharton and Virginia Woolf both helped to start her literary career. Newly married, she and Antonio Origo, a marchese, bought a large house with an estate of 3,500 acres in Val d’Orcia, an unspoilt valley south of Siena.

War in Val d’Orcia takes the form of a diary that reaches a climax in June 1944 when artillery starts to shell La Foce, partisans take up positions and German soldiers move into the house under the shadow of death and destruction. It falls to Iris as the marchesa to take responsibility for the children of local villages, and she does so naturally; noblesse oblige as the French say. She and the children might well have been killed in the fighting.

As the front line at last rolls on, a British major is at the door asking, ‘Are you Marchesa Origo? The whole Eighth Army has been looking for you.’ He brings the news that her cousin Ulick Verney of the Scots Guards is only a few miles away. One sentence in particular shows how she has remained herself through the experience of war: ‘I wish very much that I had a clean frock to put on.’

Her inscription is, ‘David Pryce-Jones after two very enjoyable days, from Nancy Mitford, 15 May 1970.’ Those two days were indeed very enjoyable for me but hardly so for her, because cancer of the spine was giving her such pain that she could hardly sit still. A famous Paris neurologist, she wrote to me just before we met, told her she had ‘one of the very most painful things you can have, and there is no cure. Delightful outlook!’

She had made her life in France, it was common knowledge, because the love of her life was Gaston Palewski, French of Polish extraction, a soldier and politician loyal to General de Gaulle, and sadly for Nancy the husband of another woman. Here I learned that at the outbreak of war she had hit on the nickname of Sir Oswald and Lady Quisling for her sister Diana and brother-in-law Mosley.

‘We Mitfords have our opinions injected from below,’ she said, a vulgar expression so out of character that when I reported it to whoever knew her, I was accused of invention.

Gentle in manner, usually smiling and speaking with the well-controlled bravura of a foreign accent, Roman had the air of a man of destiny. Friends with a house on the Costa Brava invited us at the same time, and there he swam with one or the other of my small daughters on his back. Sometimes he’d talk about the European past or the Middle Eastern present, always succinctly as if there were nothing more to be said. So I was aware that he had been a teenage slave laborer making Wehrmacht uniforms in the Lodz ghetto at the orders of Albert Speer, Hitler’s minister of production.

So I was aware that in February 1945 he’d been going through Dresden on a death march from one center of genocide to another when the firestorm bombing of that city started; the SS guards ran away and Roman and others jumped up to their necks into the freezing Elbe and stood cheering the explosions and the flames. So I was aware that Roman alone of his immediate family had survived Auschwitz.

Roman had been present the day that Albert Speer had inspected the workshop making Wehrmacht uniforms in the Lodz ghetto. The director, a well-known Jewish industrialist, had seen fit to pin on his striped prisoner’s clothing the medals he had won in World War One. Then and there, one of Speer’s adjutants ripped the medals off and knocked the man to the floor.

After Speer had served his 20-year sentence, Roman wrote to him and they met. Speer remembered the incident at Lodz, agreed that he had been content to watch the beating of the director and above all that he was responsible for dispatching the workshop slaves to Auschwitz in the knowledge that they would be murdered. That was enough for Roman. All he wanted was the truth.

Inside the Third Reich

I went to Vienna on Unity Mitford’s trail. After she shot herself at the outbreak of war and had been sent home to England, her friend and admirer, also a Nazi, Count Janos Almasy took possession of her papers. He had denounced his sister and brother-in-law to the Gestapo, and they had hoped to get even one day by purloining or copying some of these papers. Their son, a priest, had kept them stored in a trunk in the attic of the Sacré Cœur. Up in that dusty half-lit setting he handed me the evidence of a dark past, and I had it all safe in my briefcase when I caught the train from Vienna to Heidelberg where Speer lived.

Speer’s house had the feel of a sepulcher, the windows apparently designed to keep the daylight out. The carved wood furniture, heavy and stained, was redolent of the Germany of Kaiser Wilhelm. Speer was tall and thin, rather elegant in a well-cut gray suit. His eyes were lackluster and his manner was burnt-out. He began by saying that there wasn’t the documentation for a book about Unity, so it couldn’t be done. I opened my briefcase. ‘Ihr Buch ist gemacht,’ he said: ‘Your book is made.’

As we went over Unity’s diaries, he became a different person. In his memoirs he records that in Hitler’s company she alone was permitted to break a tacit agreement not to speak about politics, and now he remembered who had been present when and where, what had been said to Hitler and what he had replied. His astonishing recall seemed to rekindle life in him.

For my part, I repeated to Speer what my friend Roman Halter had told me about the time he had inspected the workshop in the Lodz ghetto making Wehrmacht uniforms and did nothing when one of his men brutalized the Jewish director. Yes, he knew who Roman was, and yes, he had had the power of life and death over those Jews. His biographer Gitta Sereny put her finger on his evasive technique of generalizing about specifics: ‘admitting a little to deny a great deal’. He knew he had spent his whole life in the shadows and couldn’t say why.

The Six Day War in 1967 began on a Monday. The very next day, the Arab Legion was already pulling out of the West Bank. An Israeli officer with a jeep offered to drive me to the rapidly changing front line. It was about nine o’clock in the morning, and the famous correspondent James Cameron was already in the jeep swigging whisky out of the bottle. Quite soon, he passed out and the empty bottle rattled on the floor.

A shell had smashed through the roof of the Church of the Holy Nativity in Bethlehem. A Greek Orthodox archbishop and some Israeli paratroopers stood about in swirling smoke and dust. At Solomon’s Pools, Martha Gellhorn appeared as an apparition in a khaki outfit, tailored and immaculate, for all I know fitted out by Balmain or Givenchy. She might have come straight from the hairdresser.

In 1983, Tatler commissioned a profile of her. I would understand, wouldn’t I, that she refused to speak about Hemingway and her time as his wife. She seemed not to notice how in fact she did tell stories about him. At the beginning of the war, he took delivery at La Finca Vigia of a new-model Lincoln, so new that it was the only one in Cuba. Showing it off, he drove Martha to his favorite bar in Havana. He wanted to stay there, but she had had enough of his cronies and their talk. At the wheel on the way home, he made a gesture of annoyance that she had obliged him to leave. The back of his hand caught her cheek. Grabbing the wheel, she steered the car into a roadside tree and wrecked it. ‘I told him, Ernest, if you ever hit me again I’ll shoot you.’

The marriage was finally over when Hemingway was refused permission to cover the landing on D-Day but Martha disguised herself as a nurse, slipped on to a hospital ship and reported the invasion from Omaha Beach.

Signatures: Literary Encounters of a Lifetime