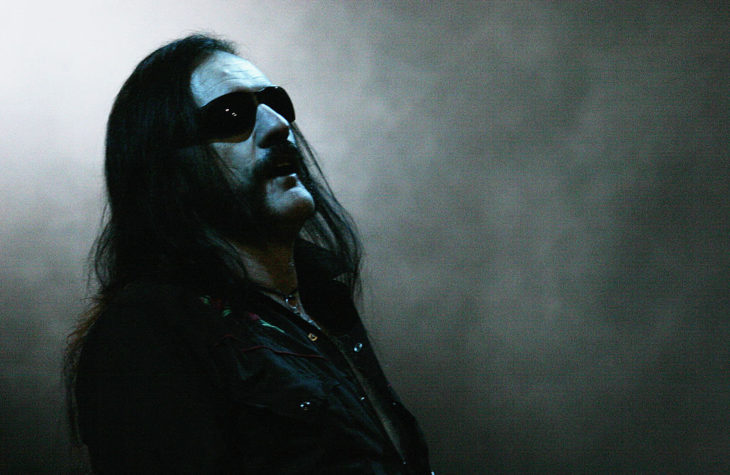 ‘Because we shoot to kill/ And you know, we always will’: Lemmy plays Download Festival in 2005

Wokeness, first conceived of by the Armenian mystic George Gurdjieff (1872-1949) had barely reached the mainstream when Ian ‘Lemmy’ Kilmister died in 2015. Still, Lemmy had given considerable thought to staying woke. As a champion abuser of amphetamines, he’d spent more time awake and thinking than anyone since 1945. Perhaps his surprising death –– surprising, because he seemed indestructible –– was necessary in some Gurdjieffian way, to make room for the terrors that now occupy our psyches.

Lemmy, son of a vicar, ex-factory worker and Jimi Hendrix roadie, was one of those rare rock ’n’ rollers who landed fully formed in the freak scene of late-Sixties Ladbroke Grove, west London. When he joined space-rock drug fiends Hawkwind in 1971, it was all there: the Hell’s Angel image, the Iron Cross at the throat, the speed up the nostrils, the Jack Daniel’s and cigarette, that bowel-crunching bass sound –– and that voice.

On the few Hawkwind numbers Lemmy was allowed to sing, he sounds like a World War Two bomb crater being sucked back into the guts of the earth. On 1973’s monolithic live album Space Ritual, Hawkwind even set the blueprint for Lem’s future, and future band. Over ‘88 minutes of brain damage’ (as originally advertised), Hawk leader Captain Dave Brock and Lemmy pour out a relentless audio blitzkrieg, jamming into the endless nothingness which seemed always to be Hawkwind’s desired destination.

Lemmy, strumming huge Panzer-division chords on his Rickenbacker 4001 bass, was already sounding like a one-man band. Inevitably, Hawkwind kicked him out of the jams. In 1975 he was dismissed halfway through an American tour, allegedly for ‘taking the wrong kind of drugs’. With no money and no band, Lemmy headed back to Ladbroke Grove, seduced all of his erstwhile bandmates’ girlfriends and assembled a new group. The band, initially called Bastard, were eventually named after the last song that Lem had written for Hawkwind, ‘Motorhead’, from the American slang for an amphetamine freak. That song, yet to be adorned with an umlaut, became a manifesto. Over the next four decades, Motörhead became the first and last word in rock ’n’ roll and hard rock, but not, Lemmy insisted on impeccable musical grounds, heavy metal.

Motörhead took a couple of years to get going. An early line-up with the great and recently late Larry Wallis of the Pink Fairies didn’t quite make it out of the Grove. By 1976, Lemmy had found collaborators worth their sulfate: guitarist ‘Fast’ Eddie Clarke, and drummer Phil ‘Philthy Animal’ Taylor. They took off with the 1979 album Overkill, made with former Stones’ producer Jimmy Miller, and didn’t touch the ground again until Clarke’s departure in 1982.

Overkill and its follow-up Bomber (also from 1979) are getting the ‘0th Anniversary’ deluxe reissue treatment. These reissues can be embarrassing for bands selling the same old rolling stock — heavy vinyl, remastered from a recent CD remaster! — to an aging, dying fan base. Not with Motörhead. As long as there are leather jackets, their logo will be daubed on the back of them.

The super deluxe version of both albums costs more than $150. There may be better things that you could spend that on, but right now I can’t think of any. Besides, as well as the usual stuff — Bomber’s payload includes studio rarities, unreleased live shows, postcards of strippers, shards of Philthy Animal’s skull and an Airfix model of a Heinkel 111 bomber (really!) — you also get the original albums.

Bomber is superior. Lemmy named it after the first novel to be written on a word processor, Len Deighton’s Bomber (1970), a granular reconstruction of a World War Two RAF raid. If Lemmy had read Deighton’s very Seventies cookbooks, the album might have been called Tinned Tuna Bisque with Evaporated Milk.

Six months earlier, Philthy sped up Keith Moon’s double kick-drum for the track ‘Overkill’, a trick subsequently used by every metal band from Iron Maiden to Metallica. But the classic Motörhead line-up had too much groove and blues to be heavy metal.

It was clear something was wrong at the Glastonbury festival in 2015. Lemmy seemed muddled, and sang the words to his signature song, ‘Ace Of Spades’, while the band played ‘Overkill’. Life caught up with him at the end of the year, a few days after his 70th birthday.

We shall never see his like again. Maybe we don’t need to. The world is a different place from the one that Lemmy left. In years to come, people can and will complain about his dubious fondness for Nazi memorabilia and lap dancers, and his biker’s attitude to women. But it’s not really about any of that. It’s not even about the highly collectible model Heinkel or the devastating live recordings. The four original sides of Bomber and Overkill are some of the greatest rock ’n’ roll ever made. Dig out your old copies or buy a new one. Turn it up loud. ‘You know, we do it right / A mission every night.’